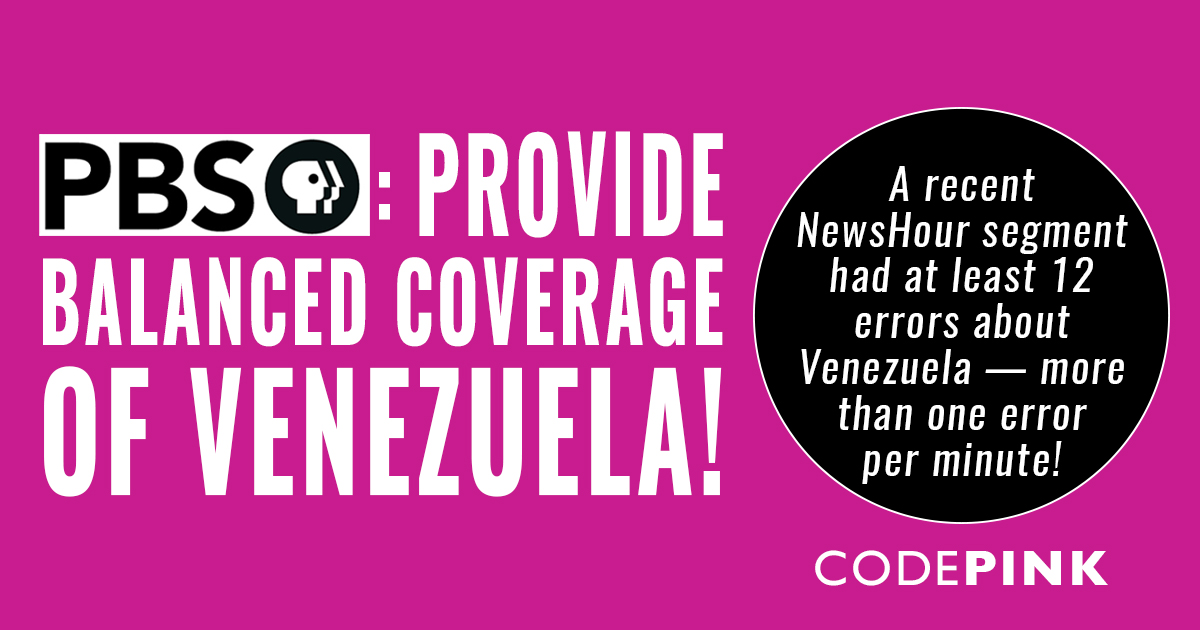 PBS Newshour recently presented a segment on Venezuela that had more than one error per minute. Join us in demanding that PBS provide accurate and balanced coverage of Venezuela!

PBS prides itself on serving the public interest and airing content that is both accurate and fair. It was therefore extremely disappointing that a recent PBS NewsHour segment titled “In Venezuela, an ongoing struggle for power amid a growing humanitarian disaster”, completely missed the mark in terms of providing balanced coverage of Venezuela’s December 6 parliamentary elections.

This segment gave the impression that the Venezuelan opposition boycotted the vote, when in fact the boycott was a partial one: thousands of candidates from 97 opposition parties ran for office. Those parties earned over 1.8 million votes, close to 30% of the total. Hundreds of international observers monitored the vote, which they described as free and fair. Teri Mattson of CODEPINK was one such observer; she noted that “voting is easy, fast and secure… [and] the system is free from fraud and tampering.”

Venezuela’s electoral system relies on electronic machines backed by paper receipts and sixteen pre- and post-electoral audits. It is much more robust than the voting process in the United States. While turnout was relatively low by Venezuela’s standards, it was not low by international standards. On the same day that Venezuela held legislative elections, Romania elected a Prime Minister with similar voter turnout.

Beyond the elections, the segment contained several misleading statements that serve to confuse U.S. audiences about the reality on the ground in the country. For instance, Juan Guaidó was not “constitutionally first in line” for the presidency. Article 233 of Venezuela’s constitution states that the president of the National Assembly is in line only when the President of the country becomes “permanently unavailable to serve” prior to his inauguration. President Nicolás Maduro was duly inaugurated on January 10, 2019 and is clearly able to serve. Furthermore, the segment claimed that the 2018 presidential elections were “declared illegitimate by the opposition-led” National Assembly, yet Venezuela’s parliament holds no such power and was in fact in contempt of court throughout all of 2018. Moreover, Juan Guaidó was not barred from entering the National Assembly - he was barred from bringing a fugitive onto the premises.

These are complicated issues and they deserve thorough analyses by journalists, not repetition of talking points used by one side.

Regarding the people interviewed for this segment, it is curious that PBS NewsHour granted two interviews to people linked to the opposition, including opposition leader Leopoldo López, while failing to interview anyone sympathetic to the government. López broke out of house arrest in April 2019 to attempt a violent overthrow of the government; he was photographed with rebel soldiers who were carrying machine guns in a public space. López has spent years attempting to overthrow the Venezuelan government. Featuring him does a disservice to Venezuela's democratic opposition that is committed to peace and election.

Just as egregious was the lack of context of the second opposition-linked person interviewed, Roberto Patiño. Patiño was presented as the “head of a community kitchen.” What went unreported is the fact that he is also a fellow at the Atlantic Council, a think tank that openly wants regime change in Venezuela. Furthermore, Patino’s organization is the brainchild of opposition legislator Manuela Bolívar, who belongs to Leopoldo López’s Voluntad Popular party. The organization also has close ties to Rescate Venezuela, which receives U.S. funding.

PBS’s audience deserves to know that the people interviewed by NewsHour are actively involved in the effort to overthrow the Venezuelan government.

This is not the first time that PBS NewsHour has produced biased coverage of Venezuela.The September 17 segment, “Venezuela’s humanitarian crisis has only worsened under COVID-19”, contained similar errors and misrepresentations.

Perhaps what is most troubling about the PBS coverage of Venezuela is that it consistently underreports the devastating effects of U.S. sanctions and U.S. interference. According to economist Pasqualina Curcio, they have cost the Venezuelan economy $194 billion and reduced import earnings by 99%. Most tragically, at least 100,000 Venezuelans have died as a result of this cruel policy. Additionally, PBS NewsHour has never explored how U.S. interference (encouraging the opposition boycotts of elections in 2018 and 2020, for example) has affected Venezuelan society.

We hope that this open letter will begin a conversation between PBS and activists in the United States who want peace for Venezuela. We would be happy to provide a list of experts inside and outside Venezuela who could provide a different perspective about the situation the country finds itself in.