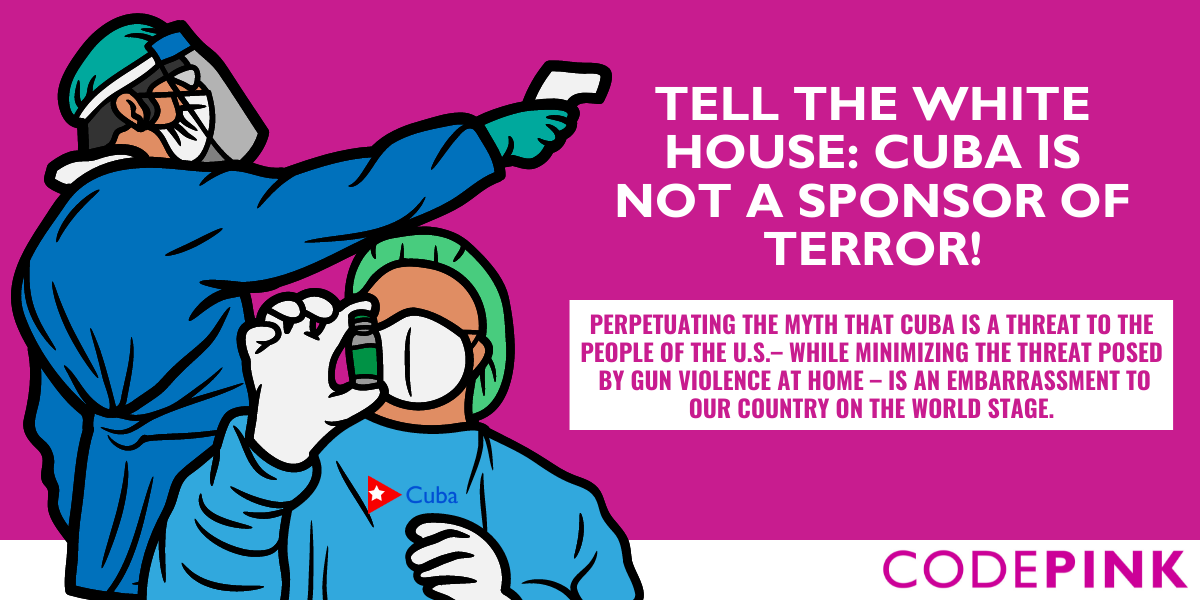 A crucial policy of the Trump administration remains, and that is Cuba’s presence on the State Sponsors of Terrorism list.  It is critical to Cuba’s ability to pursue economic, trade and humanitarian activities that it be removed immediately from the list - a power well within Biden’s authority.  Please sign our petition to the White House calling for Cuba to be removed from the list.

We are pleased that you have recently announced new policies towards Cuba that will help ease travel restrictions and help Cuban-Americans support and connect with their families. We are writing to ask that in addition to these measures, you also take Cuba off the list of State Sponsors of Terrorism.

As you are aware, in the last days of the outgoing Trump administration, then Secretary of State Mike Pompeo added Cuba back onto the list of state sponsors of terrorism, from where it had been just removed in 2015 by the Obama-Biden administration.  After a significant review, the Obama-Biden White House certified that “(i) the Government of Cuba has not provided any support for international terrorism during the preceding 6-month period; and (ii) the Government of Cuba has provided assurances that it will not support acts of international terrorism in the future.”

The re-designation of Cuba to the list was purportedly “for acts of international terrorism in granting safe harbor to terrorists,” presumably for serving as a co-guarantor with Norway of the Peace Accords between the Colombian government and the FARC, a known guerrilla group.  The FARC’s insurgent activities years ago during the civil strife in Colombia does not fit the definition of international terrorism, and the FARC representatives were in Cuba as part of an internationally recognized process of peace negotiations supported by the United States, Norway, Colombia and other nations.

By being on the list, Cuba is subjected to a series of sanctions and international financial restrictions that limit Cuba’s ability to carry out critical financial transactions, including those needed to advance its efforts to combat the pandemic. The economic deprivations to which U.S. sanctions contribute have resulted in the mass migration of Cubans that is currently a major challenge to U.S. interests in border security, as well as to a humanitarian crisis for the very Cuban people that your administration claims to support.

Removing Cuba from the list would facilitate Cuba’s ability to access critical foreign assistance and humanitarian aid, including as it prepares to assist with vaccine distribution globally.

When the Obama-Biden Administration certified the removal of Cuba from the list in 2015, the White House you served in as Vice-President stated that the United States would “continue to have differences with the Cuban government, but our concerns over a wide range of Cuba’s policies and actions fall outside the criteria that is relevant to whether to rescind Cuba’s designation as a State Sponsor of Terrorism.”

We believe the exact same situation exists today. The United States does have clear differences with the Cuban government, but we also have both national and international interests in supporting efforts to combat the coronavirus and to mitigate Cuba’s humanitarian crisis that is causing tens of thousands of Cubans to seek dangerous passage to the United States.

At the beginning of your term, you stated that Cuba’s designation on the SSOT list was under review.  Given that removal from the list requires an inquiry into any terrorism-sponsored activity and a guarantee that no future support will be given before providing a rescission request to Congress, we request that your administration immediately complete that review and initiate proceedings to remove Cuba from the list. Such a move will advance legitimate U.S. security and humanitarian interests in a safer world, and help the future of the Cuban people.