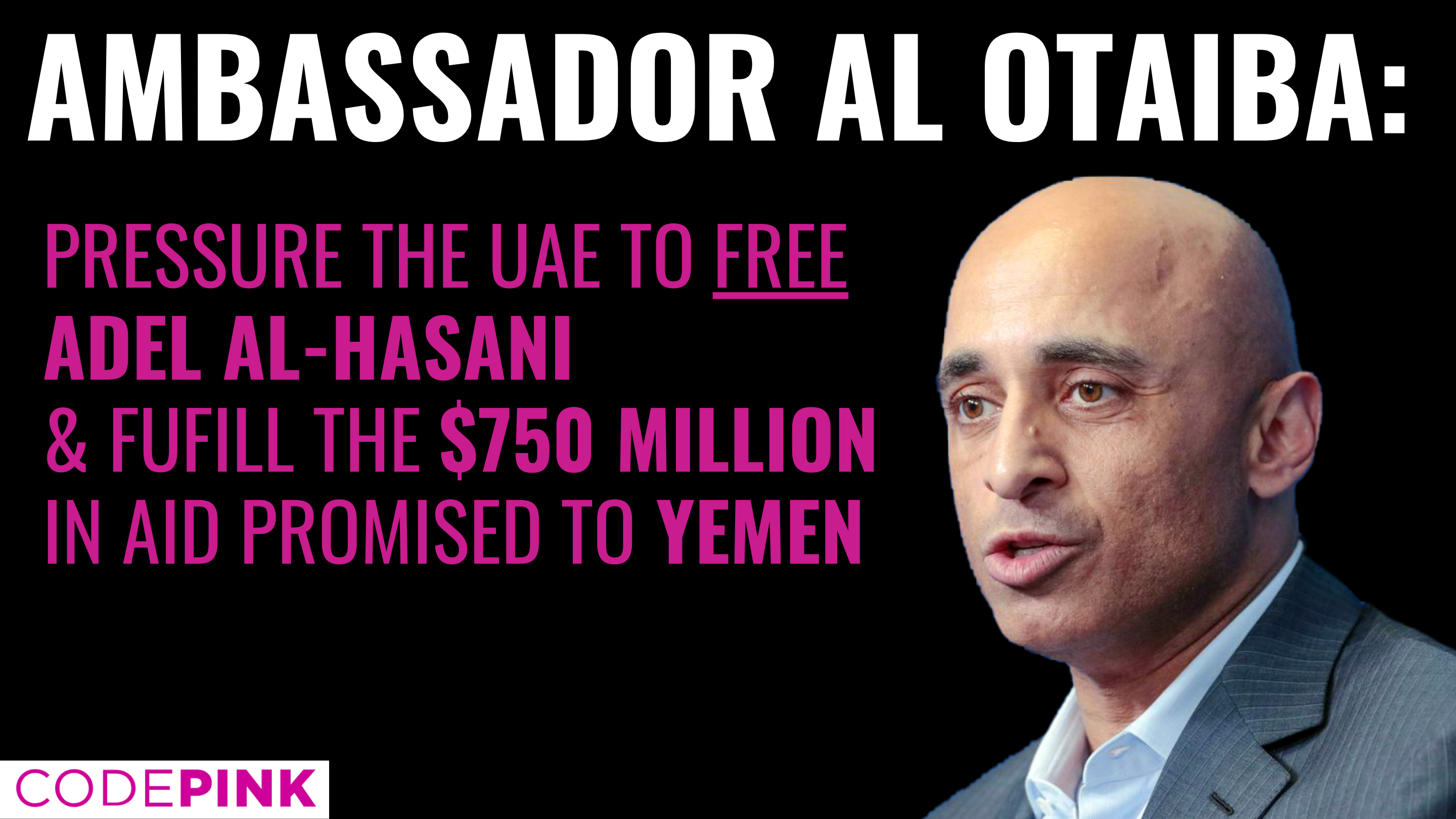 UAE Ambassador Al Otaiba raised his voice at Representative Ro Khanna and then invited Khanna on his podcast. We are echoing Representative Khanna’s demands for Otaiba to pressure the UAE to release Yemeni journalist Adel Al-Hasani and adding demands for the UAE to free more political prisoners and to finish giving the $750 million in aid it owes to Yemen. Add your name!

We the undersigned are asking that you use your immense power as an ambassador for the United Arab Emirates to free political prisoners such as Yemeni journalist Adel Al-Hasani and fulfill the UAE’s promise of $750 million in aid to Yemen.

In February, the story broke that you had raised your voice to Representative Ro Khanna, who has been a loyal and loud voice in the U.S. Congress for ending the horrible war in Yemen. Representative Khanna has seemed to move on from the dispute, but after you invited him on your podcast, he released a statement agreeing to join only if you use your influence to have Adel Al-Hasani released. Al-Hasani is a prominent Yemeni journalist who was arrested in Yemen in September 2020. There have since been reports of his declining health. In Representative Khanna’s statement, he said, “The Southern Transitional Council is unable to release Adel Al-Hasani due to political pressure from the UAE.” We demand that you call for the release of not only Adel Al-Hasani but also fellow political prisoners Ahmed Mansoor, Mohamed Al-Roken, and Ahmed Etoum.

The UAE agreed to give $750 million in aid to Yemen. Yemen is experiencing the world’s worst humanitarian crisis, and this crisis is only possible because of the Saudi-led and UAE-supported war on the country. The UAE has only given a small portion of the aid promised, and it has the moral obligation to fulfill its full promise and then some.

We are approaching almost six years of foreign intervention in Yemen by Saudi Arabia, the UAE, and others. The Saudi-UAE coalition has targeted hospitals, funerals, weddings, schools, and school busses. The deadly blockade on Yemen is starving and killing Yemeni civilians. Food and clean water are scarce in large areas of the country, and Yemenis are battling COVID19 and other infectious diseases without the full capacity of their healthcare infrastructure.

The aid the UAE promised to Yemen is direly needed. We ask that you demand that aid be administered immediately. Please heed the call by Representative Khanna to pressure your government to release Adel Al-Hasani, and while you are at it, push for the release of other prisoners of consciousness.