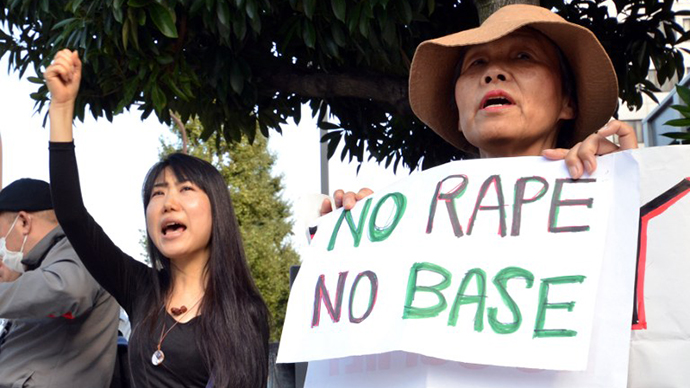 Another murder has occurred in Okinawa, and the beloved yet endangered bottlenose dolphin is no longer spotted near Gangjeong village. What is the connection between these two issues? U.S. military bases. In Washington DC, I have heard repeated claims that U.S. military bases “protect the American people” and are “essential for security purposes.” This couldn’t be farther from the truth: U.S. bases are detrimental to the environment and harmful to people.

In Jeju, South Korea and Okinawa, Japan, military bases have long been a sickening reality. On both islands, people have been fighting against U.S. militarism and all the difficulties it has brought such as murder, rape, prostitution, and various other crimes. Beaches on Jeju, known as “Island of Peace,” have been destroyed by the Koreans to create a naval base. Since the U.S. has control over and access to all South Korean forces, many believe that the base’s purpose is to keep an iron fist of control over the region.

Okinawa, only .6 percent of Japan’s total area, houses 74.3 percent of the space taken up by U.S. military bases in the country. An unprecedented 18.4 percent of the total area in Okinawa is occupied by the United States. Okinawans have suffered from the loss of so much land and U.S. occupation since the bloodiest battle in the Pacific, the Battle of Okinawa, where they lost around ⅓ of their population. Having a long and complicated history of occupation not only by the U.S., but also by Japan, Okinawa has been seeking peace.

For many Okinawan women there has been no “post war” period. Rape, murder, and countless other crimes run rampant, and when reported go unjustly ignored because of the Status of Forces Agreement (SOFA), which takes the power of prosecution away from the Okinawan authorities.

On both Jeju Island and Okinawa, protesting against the U.S. military presence does not stop. Every day people protest and share food, water, and resources as they camp out near the military bases. On Jeju Island, protesters have been active since 2007 following peaceful rituals in opposition of the U.S. naval bases.

A common misconception is that military bases are defensive and make the United States, and the host countries, safer. These military bases function more as launching pads for interventionist wars that have resulted in repeated disasters costing trillions of dollars and millions of lives all around the world. North Korea’s threats of targeting U.S. bases have raised concerns that bases are not only failing at making us safer, but are also making us targets for more attacks.

This is indeed the case in the Middle East where overseas bases provoke anti-American sentiments and have been major catalysts for radicalization. The U.S. bases in Guantanamo and Abu Ghraib produced international outrage and have created serious backlash. One clear example is ISIS, which adorns its victims in orange jumpsuits similar to those of prisoners in Guantanamo prison, and uses these images to foment hatred of the U.S. and recruit new members. The continued presence of U.S. troops in military bases in Saudi Arabia after the 1991 Gulf War was what Osama Bin Laden described as a “turning point” in his life against the United States and towards violent extremism.

What’s even worse, is that U.S. taxpayers are paying for the lie of foreign military base security, a lie that is brutalizing local populations and the environment while increasing threats to security and peace globally. Don’t U.S. taxpayers pay enough for the bloated military budget? Some of our tax dollars are paying for around 194 golf courses on bases inside and outside of the US in addition to military musical bands. We must redirect military funds to education, healthcare, and creating green jobs.

It is time we start caring about military bases and what they do to the earth and ourselves. We must shut down these pointless and horrific bases and invest in peace.

Alice Newberry is an intern in the CODEPINK Washington DC office. She was born in Tokyo, Japan, and is a senior at The Evergreen State College.