Why is Senator Cardin trying to sabotage Venezuela’s elections? 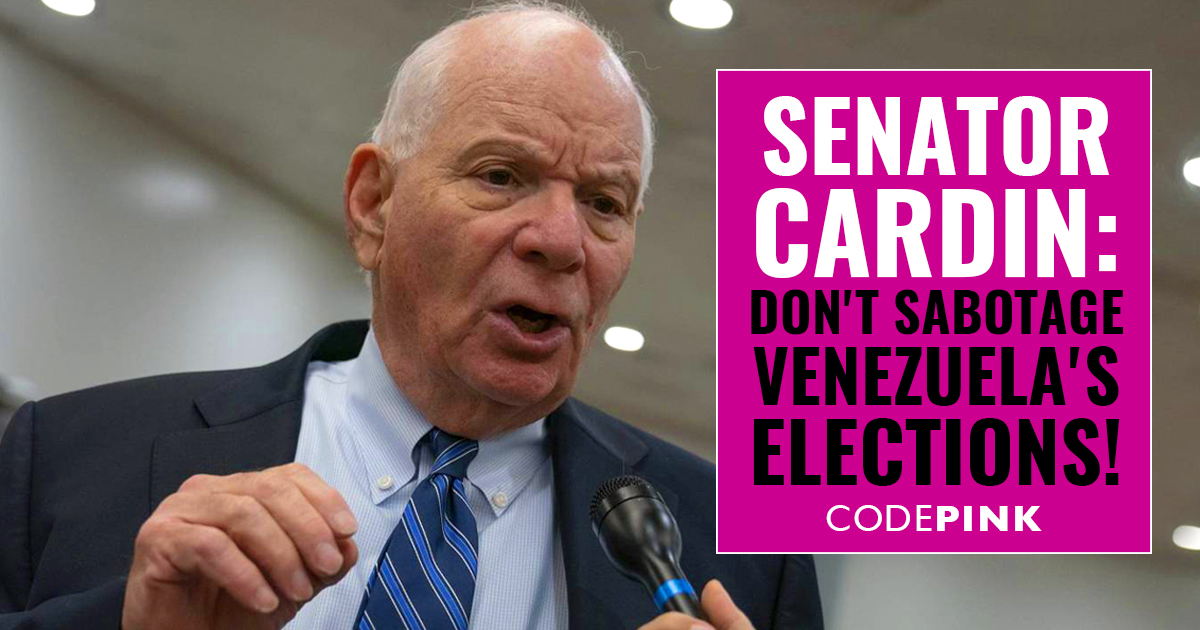 Proving once again that the hybrid war on Venezuela is bipartisan, Democratic Senator Ben Cardin joined Republican Senator Marco Rubio — the chief proponent of regime change in Venezuela, Cuba and Nicaragua — in sending a letter to European Union High Representative Josep Borrell asking the EU to stop engaging in dialogue with the Venezuelan government and calling on the EU to “denounce” Venezuela’s December 6 National Assembly elections rather than participate as an electoral observer.

Venezuela is suffering from brutal U.S. sanctions, repeated and violent coup attempts, and a deeply polarized electorate. Legislative elections are expected to go a long way towards easing tensions. Why are top Democrats like Cardin so intent on interfering in Venezuela’s internal affairs?

Tell Senator Cardin that rather than trying to sabotage talks between Venezuela and the EU, the US should follow the EU path of dialogue.

The Trump administration is attempting to delegitimize Venezuela’s elections months before they’re scheduled to occur. Venezuela is using the same electoral system it always has — the system which is audited every step of the way, prints paper receipts of electronic votes and confirmed an opposition victory in the 2015 elections. Opposition leaders and parties representing millions of Venezuelan voters have said they will participate in the elections. As a result, the Trump administration issued sanctions against four of these leaders for wanting to participate democratically. Only the factions supported financially, logistically and politically by the Trump administration are still boycotting the elections — knowing that continued U.S. support is contingent upon it. It is clear interference to sanction those who participate in elections while rewarding those who boycott.

What we’re seeing now in terms of Venezuela policy is a repeat of 2018, when the Trump administration condemned Venezuela’s presidential elections before they were even scheduled! Unfortunately, no Democrats in Congress challenged the administration’s strategy or the “logic” behind denouncing elections months before they occur. This decision led directly to Juan Guaidó’s self-proclamation as president in January 2019 and the mess created by his destabilization, calls for sanctions and threats of war. Will the U.S. set up a parallel National Assembly after it fails to recognize the winners in December?

Tell Senator Cardin that the people of the U.S. have had enough of parallel governments, regime change and electoral interference in Venezuela!

Regardless of who wins in our own elections in November, it seems as though the sanctions and intervention in Venezuela's affairs will continue. We have to keep the pressure on our elected officials, whether Democrat or Republican, to insist that the people of Venezuela deserve to have their sovereignty respected. Just as Americans oppose outside intervention in our elections, so we must oppose the efforts of our government to impose its will overseas.