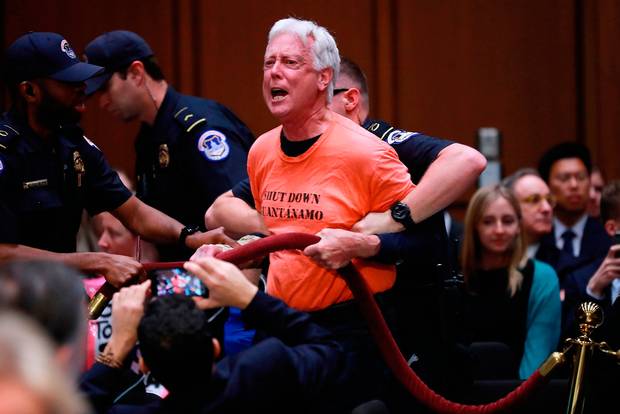 There comes a time to speak out, even if it might result in a jail sentence of up to six months, and this is precisely what I did when the Senate was voting on Gina Haspel to head the CIA. Gina Haspel is the first woman and the worst woman to head this secret, anti-democratic agency. She was directly involved in torture and then in the destruction of the evidence. That’s why from the Senate Visitors Gallery balcony, far above the Senators who were about to vote on her nomination, I shouted out:

“You senators who vote to approve a human torturer and destroyer of evidence of human rights violations are violators yourselves of the Geneva Conventions, the Convention Against Torture and you violate the Nuremberg principles.  Hitler, too, had lawyers to excuse torture. All my life the CIA has committed crimes against humanity. No one has ever been held accountable. We tortured 3,000 Vietnamese to death under Operation Phoenix.  The CIA has overthrown four democracies: Iran, Guatemala, Chile…”

I could not remember the fourth republic, as I was by now slowing down and running out of breath. I am, after all, seventy years old.

I was removed by three burly Capitol Hill police officers, who ushered me down a long flight of steps and promptly handcuffed me.  The arresting officers tried to be humane in the way they treated me. The plain-clothed officer spoke to me in a gentle voice, “Now, you do know that what you did was wrong?” “No,” I answered, “I stood up for human rights.”

It is common knowledge that Gina Haspel followed illegal orders to supervise torture in a secret black site prison in Thailand called Cat’s Eye. Torture included waterboarding, mock executions by firing squad with the victim blindfolded, putting prisoners in a coffin-sized box with insects. Gina earned the nickname given her by her fellow CIA mates as “Bloody Gina.” The excuse offered to Haspel by collaborationist Senators was that at this time “enhanced interrogations” had been suddenly declared legal by three US Department of Justice lawyers, including John Yoo.

These lawyers had turned themselves into little Daniel Websters and said torture is not torture unless the victim dies from the practice of torture or there is organ failure. Of course, this convenient re-definition was arbitrarily written by one offending party years after we had signed on to the Geneva Conventions and the Convention Against Torture. It was also long after we had prosecuted Nazis and Japanese war criminals under the Nuremberg Principles, which held that obeying orders that violate human rights are illegal. Most people know B.S. when they see it, but with too many politicians, B.S. is their second language.

Only a week earlier, in a Senate hearing, the only hearing on Haspel that the public could attend, four of us were arrested before the hearing started when we chanted “Don’t promote a torturer,” while holding signs that read “Vote no on Gina” above our heads. Although Capitol Hill police officers had said we could chant and hold our signs above our heads until the hearing began, suddenly the head officer ordered our whole row to be arrested.  It was then that I started calling out while I held onto the velvet divider rope: “‘What meaning does love have when we allow torture to continue unopposed?’ These were the words of Sister Dianna Ortiz, who was tortured under CIA supervision in Guatemala in 1989.” More mayhem broke out as the Capitol Hill police sought to arrest two other Code Pinkers, Tighe Barry and Medea Benjamin, who were shouting out, “Don’t reward a torturer.” Janice Sevra-Dijcenska, an ordained Catholic female priest then yelled out, “Stop crucifying Muslims.” Both our phrases referred to Sister Dianna Ortiz’s prayer, “Jesus Our Tortured Brother Today.” It turned out that Sister Dianna Ortiz herself attended this hearing, arriving after our arrests.  Ray McGovern, a 78-year-old former briefer of Presidents for the CIA, was brutally assaulted in his arrest as he spoke against Haspel. Another arrestee, Helen Schietinger, had called Haspel by her known CIA nickname, “Bloody Gina.” Thus, a week earlier we protesters had played an important role, but for me this was not enough by itself.

I was determined that at the final confirmation vote on Gina Haspel for CIA director at least one citizen’s disapproval should be heard, albeit a voice in the wilderness. I spoke out to oppose the suffering and cruelty that our false democracy, unrepentant, perpetuates upon the rest of our world. Our citizens must add their voices to bolster the integrity of senators like Leahy, Sanders, Harris, Wyden, and McCain, who have spoken out against torture. Unfortunately, they are too few, and the Senate went on to confirm Haspel. She has been rewarded for torture. I, on the other hand, await my trial.