Why Do I Testify At The People’s Tribunal on the Iraq War, December 2016 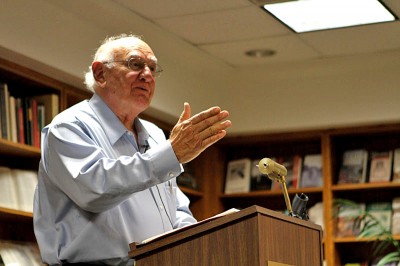 By Blase Bonpane, Office of the Americas

My wife Theresa together with Ron Kovic and Jessica Lange waited in a frigged tent in Washington, DC for what Police Chief Charles H. Ramsey said was “one of the biggest ones we’ve ever had…” It clearly looked like the gathering that Dr. Martin Luther King had for his, “I Had a Dream” speech. See Washington Post for Sunday, January 19th, 2003. But in spite of pleas for peace of hundreds of thousands of citizens in freezing weather at the nation’s capital, the clear message of our government to its people at the opening of the Twenty-first century:

WE DON’T CARE WHAT YOU WANT. YOU ARE GOING TO HAVE WAR ON BEHALF OF THE MILITARY, WALL STREET, INDUSTRIAL, CONGRESSIONAL, PRISON, GUN, PHARMACEUTICAL COMPLEX.

Profits soared for the 1%. Wages were all but frozen. Prices rose rapidly as financialization took precedence over useful production. Indeed profit without production led to a huge increase in the price of all useful items. Dollars produced by making counterproductive military trash were looking for products of value. Very quickly a 50,000. home was priced at 500,000. And then at 1,000,000. The economy tanked in 2008. The very reality on money is in question. It currently remains solely as a fiduciary reality without substance.

So I testify as a witness to war.

Our Global Exchange delegation arrived in Iraq in late December of 1990. We did not know if we could get in or could get out of the country. We were very fortunate to see the most developed country in the Arab world just days before it was destroyed. It is ironic but the tyrant Saddam Hussein operated with in the Iraqi constitution of 1921. He maintained separation of Church and State, and we saw a high percentage of women in the universities, on faculties and dressing as they wished. In the Arab world it was a secular state. Then on New Years Day of 1991 we went to Babylon and celebrated with the Iraqi people.

It would be so good for our military to know that if one arrives at a foreign land without arms and without threats, the people are most often friendly, responsive and anxious to know about you and your land. Returning to Baghdad we had a five hour meeting with Yasser Arafat. He explained the Irrational “we don’t talk to you,” position of the United States. Andy Young, our ambassador to the UN, had been was fired for talking to Yasser Arafat who made it clear to us that the key to everything in the Middle East and the key to understanding this criminal war was Palestine. The Arab world demanded that Palestine be free. Why did the United States not talk to Yasser Arafat, why did we refuse to talk to our long standing friend King Hussein of Jordan? Because we wanted a war and were going to have it. We were not interested in any relevant facts.So with a mentally ill policy we repeated the deadly crimes of the War in Indochina. Rampant torture,endless lies, bombing of civilians, smashing in to private homes, killing and terrorizing families.

Aggressive war is simply a form of rape. We knew absolutely nothing about the culture we were destroying. The legacy of our crime in Iraq is ISIS. And ISIS is a near repetition of 12th century Christendom with its Crusader States in the Levant.

Returning to the United States we immediately entered into civil disobedience against the Iraq catastrophe which our nation created. My wife, my son and I were arrested with many others at the Los Angeles Federal Building. After being hog tied and on our bellies on the marble floor of that building, we were placed in basement cells. Many hours later, still in handcuffs we heard the bombing of Baghdad was taking place. 88,000 tons of bombs fell on primarily innocent people.

None of the bombs were smart. None of those who created this disaster were smart. It was January 16, 1991. No, friends there have not been two wars in Iraq. There was just one war which began in 1991. And continues to this day. We have obviously lost this war and every one of the wars since 1945.

To our new President we say: Cease and Desist. This is why we testify.