We Can Help Thousands of Persons Fleeing Violence in Central America. We Helped Over 131,000 Vietnamese in 1975 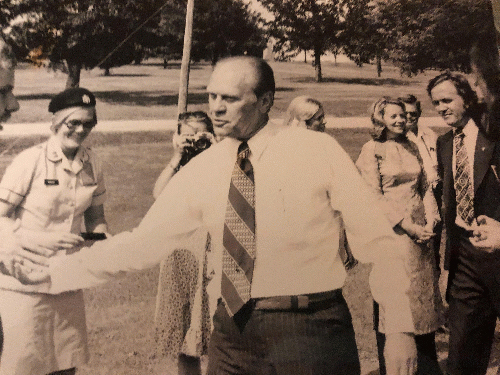 The United States has a history of accepting large numbers of refugees during crisis situations in their home countries.

The caravans of thousands of people fleeing violence in Central America are small numbers compared to those the United States took in and gave refugee status in 1975 from Vietnam and other Indochina countries. With the collapse of the U.S. war on Vietnam, U.S. signing of a peace agreement with North Vietnam and the North Vietnamese take-over of South Vietnam, in the spring of 1975, over 131,000 South Vietnamese fled the country, some on the last planes out of Vietnam and other in flotillas of small boats.

Between 1975 and 1986, about 750,000 refugees from Vietnam, Cambodia and Laos resettled in the U.S. through two initiatives from the U.S. Congress: the Refugee Parole Program and the Orderly Departure Program.

After the U.S. signed a peace agreement with North Vietnam, U.S. military ships were still off South Vietnam and began picking up hundreds of Vietnamese each day that had left South Vietnam on small boats. The vast majority of the refugees had been supporters of the U.S. war and knew that the new communist government from the North was not going to be sympathetic to their loyalty to the South and to the U.S. war on the North. In fact, many knew they would, as a minimum, be put into re-education camps, or, quite possibly, be killed for their support to the government of the South. They, just like those in Central America who are fleeing the violence of the gangs and drug cartels, much of which has been fueled by the drug consumption of millions of the U.S. citizens, were fleeing the violence of the conditions created by a U.S intervention in their country.

I was one of thousands of U.S. military who received the Vietnamese, first on military ships, then at U.S. military bases in the Philippines and Guam, ultimately in the four refugee camps set up in the continental United States--Camp Pendleton, California; Camp McCoy, Wisconsin; Indiantown Gap, Pennsylvania; Eglin Air Force Base, Florida and Fort Chaffee, Arkansas.

At the time, I was attending Law School at the University of Arkansas, 50 miles from Fort Chaffee, Arkansas and was in a U.S. Army Civil Affairs Reserve unit. The U.S. Army was notified on April 25, 1975, that the four military installations would be used and immediately a call from the Pentagon went out -- the Civil Affairs and Quartermaster Reserve units requesting volunteers to help set the military installations to receive and house up to 30,000 persons at a time. The first refugees arrived at Fort Chaffee just seven days later on May 2, 1975 on a plane carrying 70 persons. Within 22 days, there were 25,812 refugees, making the military installation the 11th-largest city in the state of Arkansas. By June 14, 1975, there were 6,500 Army Reserve personnel working at Fort Chaffee. At the peak of the airlift, as many as 17 flights a day landed at Fort Smith Municipal Airport and in the seven months Fort Chaffee was used as a refugee center, a total of 415 refugee flights landed there.

Fort Chaffee had not been used since the mobilization for the Korean war except for U.S. Army Reserve and Arkansas National Guard annual two-week training cycles. The majority of the sprawling World War II and Korean War barracks had been closed up for over 20 years. U.S. Army engineer units and medical units from Fort Sill, Oklahoma, the closest active duty U.S. Army installation, arrived in late April 1975 to open up the barracks and the hospital buildings that had not been used for decades.

All sorts of animals had to be removed as the buildings were swept clean, toilet facilities reopened and buildings partially renovated for family groups. The giant "mess halls" or military cafeterias were opened up, the small hospital cleaned and equipped and office spaces for the many refugee placement agencies were constructed.

And then the planeloads of refugees began arriving at the small Fort Smith Municipal Airport. The refugees were put on buses for the 30-minute ride to Fort Chaffee, where they were processed, more paperwork filled out by hand (no computers back then) and assigned to a specific area and barracks. Persons with medical problems were seen by U.S. Army doctors and nurses.

The U.S. Army cooks and contract personnel from the Fort Smith area, began cooking huge cauldrons of rice and vegetables and boiling water for tea. The mess halls were open 24 hours a day. Each mess hall would feed 6,000 persons, three meals a day.

But, the rice we were cooking was not the type of rice that Vietnamese liked. And the rice was from the host state -- Arkansas, one of the big rice producing states in the U.S. Our first major diplomatic challenge was telling the Arkansas state governor -- Bill Clinton --that we would have to get a different type of rice produced in another state -- because the Vietnamese refugees were not eating the Arkansas rice. Needless to say, that did not go over well in a state where most Arkansas residents, including myself, didn't know there were different kinds of rice.

Then babies on formula began getting sick. Lots of babies arrived with their severely stressed mothers who were having trouble producing milk due to the anxiety of fleeing their homes. Many babies had been born on the journey and 325 children were born to refugees at Fort Chaffee during their short stay. The medical staff said that the babies were lactose intolerant. In Vietnam, cow produced milk for formulas was not used. One of my jobs was to contact the very few companies in the U.S. that were producing lactose-free baby formulas and have them send these formulas to the four U.S. military bases that were home to the refugees. Companies cooperated very quickly, turning trucks around from their original destinations and sending them to the military bases and ramping up production for a new lactose-intolerant demographic in our country.

The refugee camp was divided into five areas for administrative and logistics efficiency.

I was in charge of the "sundry" products for the entire refugee population. Each of the five camps had a "store," a place where sheets and towels could be exchanged, where soap, shampoo, diapers and basic products could be obtained -- not purchased.

In the beginning of the operation, there was no laundry facility large enough in the Fort Smith, Arkansas area to wash and dry all the sheets and towels we were using. Initially, we didn't have sufficiently bedding and towels so we helicoptered laundry to Fort Sill, Oklahoma, where the U.S. Army had large laundries for the U.S. Field Artillery training base. Later as we got more supplies of sheets and towels we trucked dirty laundry overnight to Fort Sill.

Day after day, hundreds of refugees arrived by plane and each day as buses brought a new group of refugees to the camp, many would come to the area where the new persons were processed to see if any of their family members were in the new group. I remember particularly, one elderly woman who each day came to the processing area to see if any of her extended family from whom she had been separated during the chaotic flight from Vietnam had arrived. She sadly watched day after day, until finally one day someone she knew arrived and told her which camp her family had been sent. After a week, we were able to reunite her with her family.

Within two weeks, hundreds were leaving the camps, refugee organizations having found communities and groups all over the United States that would sponsor families.

The outpouring of communities around the country that sponsored families and individuals was incredible. Churches and civic groups found housing, equipped the houses and found jobs for persons they did not know and from a land they knew little except through the war and returning U.S. military personnel -- quite unlike from today when communities already have many persons from Latin American countries who are already strong members of the community.

As the summer of 1975 came to a close, we knew that some refugees would still be in the refugee camps for part of the winter. A decision was made in Washington that all the camps but one would be closed and refugees that had not yet been sponsored would be consolidated in one camp at chilly Indiantown Gap, Pennsylvania.

The U.S. Army general in charge of Fort Chaffee called me into his office and said, "By tomorrow, I need a list of the amount of clothing we are going to need for the refugees we will have during the cold winter at Indiantown Gap, Pennsylvania." I asked, "Do we know the number, ages, sexes of those who will be in the camp?" The general's answer: "No, just make a guess."

So, off I went into the small city of Fort Smith, Arkansas to Sears & Roebuck and J.C. Penny, the two merchandise stores that had hard-copy catalogues. Returning to Fort Chaffee my team begin tearing out pages of the catalogue for the winter clothing for infants, kids ages 1-5, kids ages 6-13, young adults and older adults. Three changes of clothes, a winter coat, hat, gloves and shoes. By the next morning I had the wardrobe figured out and took my fashion proposal to the general.

He approved it and then said, "Figure out where we can purchase these clothes and get them to Pennsylvania by late September." In calling Sears and J.C. Penny, the two largest clothing retailers in the country at that time, we found that these companies had already sent their winter clothing to their stores around the country.

The clothing problem was solved when the Armed Forces Post Exchange System that provides civilian clothing to military bases around the globe said that they had in their warehouses winter clothes that would meet our requirements and they could deliver in September.

All of these stories to say, in today's U.S. society and land mass, if there was the political will in our government, there is certainly room in our country for people fleeing violence in their own countries. 43 years after the U.S. accepted 750,000 persons from Southeast Asia fleeing violence much of which had its origin in the U.S. war on Vietnam, we can certainly accommodate tens, if not hundreds of thousands of people fleeing violence in their countries stemming from U.S. policies in Central America and the Middle East.