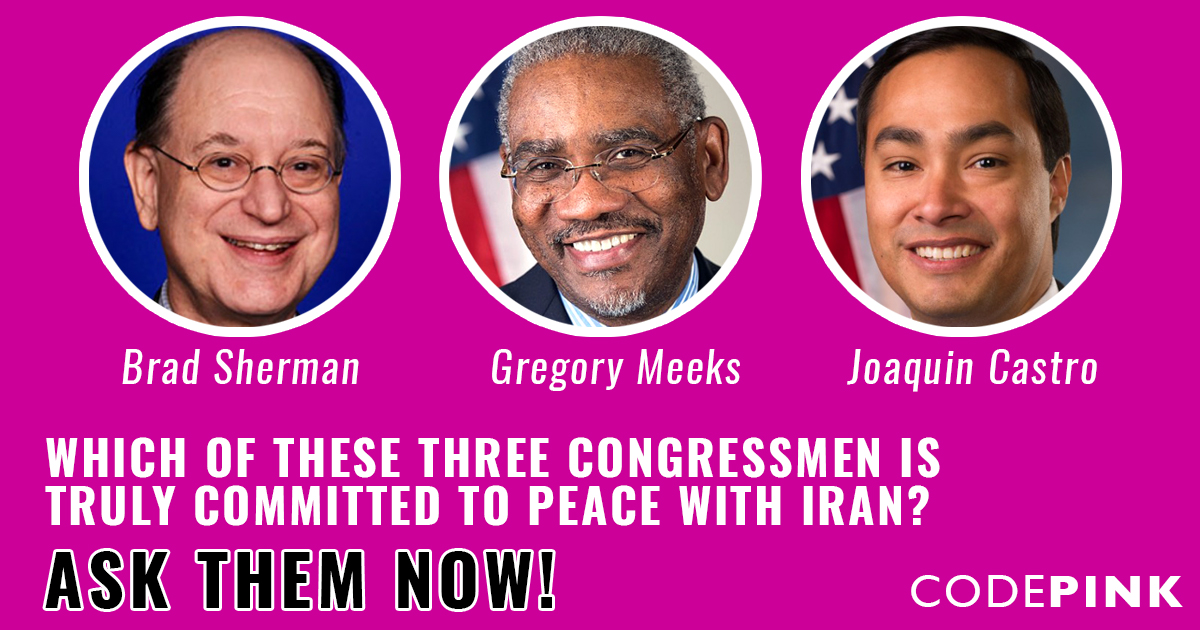 Thanks to the tireless work of many progressives, ALL THREE contenders to be the next chair of the House Foreign Affairs Committee have come out for conditioning U.S. military assistance to Israel so that no U.S. funds can be used for further illegal annexation of Palestinian land. Now, let’s urge them to publicly declare their support for the U.S. re-entering the Iran nuclear deal — with no preconditions.

Of the three of the contenders to replace Eliott Engels as chairperson — Reps. Sherman, Meeks, and Castro—Castro was the first to come out for Palestinian rights, stating: “I think too often Palestinian voices have been excluded.”

Meeks, not wanting to appear less progressive than Castro, quickly announced his support for conditioning military aid to Israel. Sherman took a little more convincing, but after If Not Now rallied outside his house and groups ranging from Win Without War to JStreet — and of course CODEPINK — laid out what positions a progressive Foreign Affairs Chair should hold, last Friday he joined the party, telling the Times of Israel that he will “oppose any use of American taxpayer dollars to implement the Annexation Plan or to build any permanent Israeli installation in the West Bank or Gaza.”

Now that the three candidates are supporting justice for Palestinians, we need them to also support peace with Iran. While most Democrats support the U.S. re-entry into the nuclear deal negotiated under the Obama administration, some feel that Iran should be forced to return to compliance beforehand. But it was the US, not Iran, that broke the deal. It should be the US to first re-enter the deal and lift the sanctions — and then Iran should be prepared to immediately return to full compliance.

Send an email now to Castro, Meeks, and Sherman telling them to announce that they support the U.S. re-entry into the Iran nuclear deal, with no additional preconditions placed on Iran.

Here are some indicators of the candidates’ positions on war and peace:

Demanding that Iran first return to the nuclear deal before the US will lift sanctions is really unfair. The next chair of the Foreign Affairs Committee should state clearly that the US must first re-enter the deal and lift sanctions. At the very least, the two countries should comply with the deal simultaneously. Email Castro, Meeks, and Sherman now and tell them to show that they can be leaders for peace with Iran.

America is in dire need of a fresh, pro-peace approach to foreign policy, and Congress must choose a Foreign Affairs chair who reflects the purported Democratic values of diplomacy and progressivism. So we need to know which of the three candidates will step up for peace with Iran. The fact that we could so easily push Sherman — a long-time friend to AIPAC and ally of Israel — to change his position on preconditioning aid was a welcome surprise and it let us know that our people power is working. The Foreign Affairs chairperson has the power to influence the foreign policy of the entire country, so it is crucial that they advocate for freedom and equality for Palestinians, as well as peace and diplomacy with Iran. Let’s take this recent win for Palestinian rights as motivation to continue our fight for a peaceful US foreign policy across the Middle East and the entire world. Email Castro, Meeks, and Sherman now and ask them to demonstrate their commitment to peace with Iran.

With hope and determination,

P.S. This Sunday, August 16, at 5 PM ET, we will be hosting a discussion of the Iranian film,  The Salesman, directed by Asghar Farhadi. About a married couple living in Tehran, The Salesman won the 2017 Academy Award for Best Foreign Language Film. People will watch the film on their own and then join the discussion led by CODEPINK's Leila Zand and Iranian filmmaker Saeed Nouri. RVSP now to claim your movie tickets!