US Experts Say North Korean Leadership May Be Ruthless and Reckless, But They Are Not Crazy 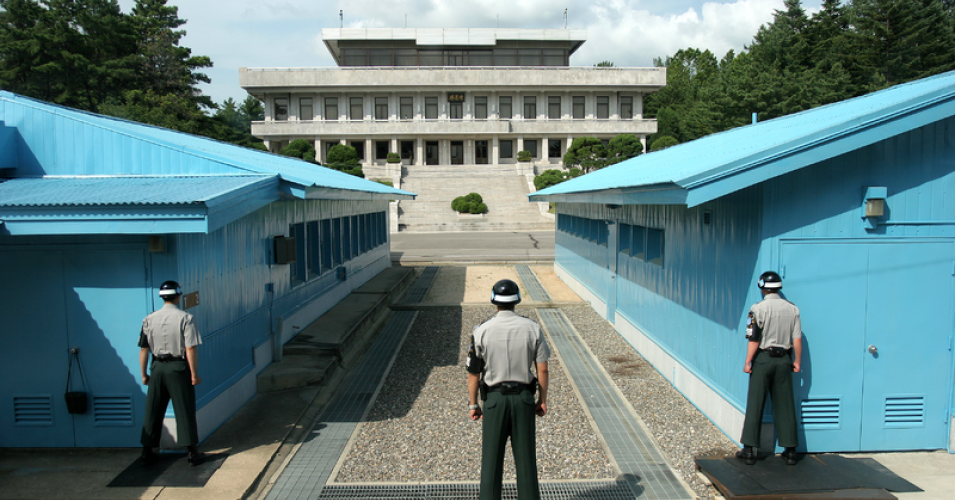 South Korean soldiers look toward the North Korean side along the DMZ that divides the two countries. (Photo: Wikimedia Commons)

And most importantly, the new President of South Korea Moon Jae-in was elected in May 2017 on a pledge to engage in talks with North Korea and pursue diplomacy to finally officially end the Korean conflict. Nearly 80 percent of South Koreans support a resumption of long-suspended inter-Korean dialogue, according to a survey by a presidential advisory panel showed in late June.

On June 28, 2017, six former high level experienced U.S. government officials from both Republican and Democratic administrations over the past thirty years sent a letter to President Trump stating that "Kim Jong Un is not irrational and highly values preserving his regime… Talking is not a reward or a concession to Pyongyang and should not be construed as signaling acceptance of a nuclear-armed North Korea. It is a necessary step to establishing communication to avoid a nuclear catastrophe. The key danger today is not that North Korea would launch a surprise nuclear attack. Instead the primary danger is a miscalculation or mistake that could lead to war."

The signatories to the letter were

Together, they wrote:  "there are no good military options, and a North Korean response to a US attack would devastate North Korea and Japan. Tightening sanctions can be useful in increasing pressure on North Korea, but sanctions alone will not solve the problem. Pyongyang has shown that it can make progress on missile and nuclear technology despite its isolation. Without a diplomatic effort to stop its progress, there is little doubt that it will develop a long-range missile capable of carrying a nuclear warhead to the United States."

The experts ended their letter to President Trump by calling for quick action: "Today there is a window of opportunity to stop these programs, and it may be the last chance before North Korea acquires long-range capability. Time is not on our side. We urge you to put diplomacy at the top of the list of options on the table."

Two weeks earlier, on June 13, 2017, former Secretary of Defense William Perry and University of Chicago Korean War historian Bruce Cummings both strongly advocated for dialogue with North Korea at the Korean Peace Network’s conference "Off Ramps to War" hosted by the Partnerships for International Strategies in Asia program at George Washington University's Elliott School of International Affairs in Washington, DC.

William Perry said, "North Korean leadership may be ruthless and reckless, but they are not crazy." He added, "Why do we have a double standard for North Korea?  We accept Saudi Arabia as it is with its human rights violations, but we do not accept North Korea as it is-a nuclear power.  Refusing to listen to the North Koreans about their goals and needs has meant that in the seventeen years since the last relevant dialogue, the North Koreans have developed and tested nuclear weapons and intercontinental missiles."

The Bush administration’s naming North Korea as part of the "Axis of Evil" in 2002 and the Obama administration's subsequent "Strategic Patience" policy were not forms of diplomacy, argued Perry, but instead were "miserable policy failures." According to Perry, the U.S. has not had a negotiating strategy with North Korea in seventeen years, and during that time, North Korea has continued to do what the U.S. and other major powers do not want it to do—test nuclear weapons and missiles.

Perry said that the North Korean government has three goals:

Perry emphasized that the North Korean government will sacrifice the last two goals—gaining international respect and improving the economy—to achieve the first goal, which is staying in power.

Because of the lack of listening to and acknowledging North Korean objectives on what its goals are—which includes signing a peace treaty to take the place of the 50+ year armistice, signing a non-aggression pact and reducing U.S.-South Korean military war games, Perry believes that the best outcome available to negotiators is to freeze the nuclear weapons and the ICBM programs, not their elimination.

Perry said he believes North Koreans would never use nuclear weapons as those weapons "are valuable only if they DON'T use them. They know the response from the U.S. would be devastating, should North Korea explode a nuclear weapon."

University of Chicago history professor Bruce Cumings, author of The Korean War: A History, said at the symposium that the Clinton administration achieved very important goals with North Korea, including "North Korea freezing its plutonium production for eight years (1994–2002) and, in October 2000, indirectly working out a deal to buy all of North Korea's medium and long-range missiles—and signing an agreement with North Korean General Jo Myong-rok in a meeting in the White House stating that neither country would bear ‘hostile intent’ toward the other."

But the Bush administration led by Vice President Dick Cheney, Defense Secretary Donald Rumsfeld and Undersecretary of State John Bolton "actively sought to torpedo the Agreed Framework" and succeeded in pushing aside the agreements negotiated by the Clinton administration thereby destroying the 1994 freeze and refusing to acknowledge the Clinton-Jo pledge of "no hostile intent," particularly since the pledge was made by allowing a North Korean general inside the White House.

With President Bush's January 2002 State of the Union speech, in which he called North Korea part of an "axis of evil," the Bush administration turned its back on North Korea, abrogating the "Agreed Framework" and halting shipments of American fuel-oil permanently.  In response, the North Koreans withdrew from the Non-Proliferation Treaty (NPT) and restarted their plutonium-producing reactor.

As Cumings wrote for The Nation, "The simple fact is that Pyongyang would have no nuclear weapons if Clinton’s agreements had been sustained."

Sheldon Richman, executive editor of The Libertarian Institute and the former senior editor at the Cato Institute agrees with Perry that North Korean leader Kim Jung Un is not crazy. "Let us dispense, once and for all, with the idea that Kim is a madman," Richman wrote at Anti-War.com. "Brutality is not madness, and a madman wouldn’t be expected to capitulate to economic pressure. He shows every sign of wanting his regime to endure, which means he would not want the US military or nuclear arsenal to pulverize it. Assuming rationality in this context asserts only that Kim’s means are reasonably related to his ends."

Richman underscores the rationale for the North Korean government to develop nuclear weapons against the will of the U.S.  "Kim shows every sign of having learned the lesson of recent US regime-change policies toward Iraq and Libya, neither of which were nuclear states. Same with Syria, whose regime has been targeted by the US government. The lesson is: if you want to deter a U.S. attack, get yourself some nukes."

Robert E. Kelly, Associate Professor of International Relations in the Department of Political Science at Pusan National University, makes a similar argument.  "This is not a suicidal, ideological, ISIS-like state bent on apocalyptic war but rather a post-ideological gangter-ish dictatorship looking to survive. The best way to guarantee the North's survival is nuclear deterrence...It is a rational decision, given Pyongyang’s goals to, 1) not change internally, and 2) not be attacked externally.  This is not ideal of course. Best would be a de-nuclearized North Korea. But this is highly unlikely at this point."

Another Japanese newspaper, Mainichi Shimbun, reported that North Korea originally demanded Washington send to North Korea a former U.S. President as a special envoy to resolve the case of Otto Warmbier, an American student who recently died after detention in North Korea.

According to the newspaper, Choe Son-hui, head of the North Korean Foreign Ministry’s US affairs bureau, notified the U.S. through its UN mission in May 2017.  However, North Korea released Warmbier in a coma after Trump refused to send a former President and sent Joseph Yun, State Department Special Representative for North Korea Policy to North Korea instead.

Another Track 2 group met with a North Korean delegation in early June 2017. Sue Mi Terry, a Korea expert who has worked at both the CIA and the National Security Council and now is with the Bower Group Asia spoke on June 28, 2017 to NPR  about meeting with North Korea officials to try to get nuclear talks back on track.

Terry said that to North Koreans, their nuclear arsenal "is a matter of survival. North Koreans have told us even in the recent meeting—and they've specifically brought up Libya—Gaddafi's case in Libya and Iraq—and said: 'Nuclear weapons is the only way for us to absolutely guarantee our survival, and this is why we're not going to give it up. We're so close to perfecting this nuclear arsenal. This is our final deterrent against the United States.' Ultimately it's about regime survival for them, and nuclear weapons guarantees it."

Terry said the North Koreans demand that the United States accept them as a nuclear power and there is  "absolutely no flexibility or willingness to meet to talk about ending their nuclear program." In contrast to other experts, Terry believes it is "unrealistic for us (the U.S.) to go from where we are to talk about peace treaty and discuss formally ending the Korean War."

She believes the solution is "continuing with maximum pressure with sanctions and trying to get China to do more. And if China does not come through, then we'll have to pursue secondary sanctions against Chinese banks and entities and see if that can get China to rein in North Korea a little bit more."

This work is licensed under a Creative Commons Attribution-Share Alike 3.0 License

Ann Wright is a 29 year US Army/Army Reserves veteran who retired as a Colonel and a former US diplomat who resigned in March, 2003 in opposition to the war on Iraq.  She served in Nicaragua, Grenada, Somalia, Uzbekistan, Kyrgyzstan, Sierra Leone, Micronesia and Mongolia.  In December, 2001 she was on the small team that reopened the US Embassy in Kabul, Afghanistan.  She is the co-author of the book "Dissent: Voices of Conscience."  (www.voicesofconscience.com)