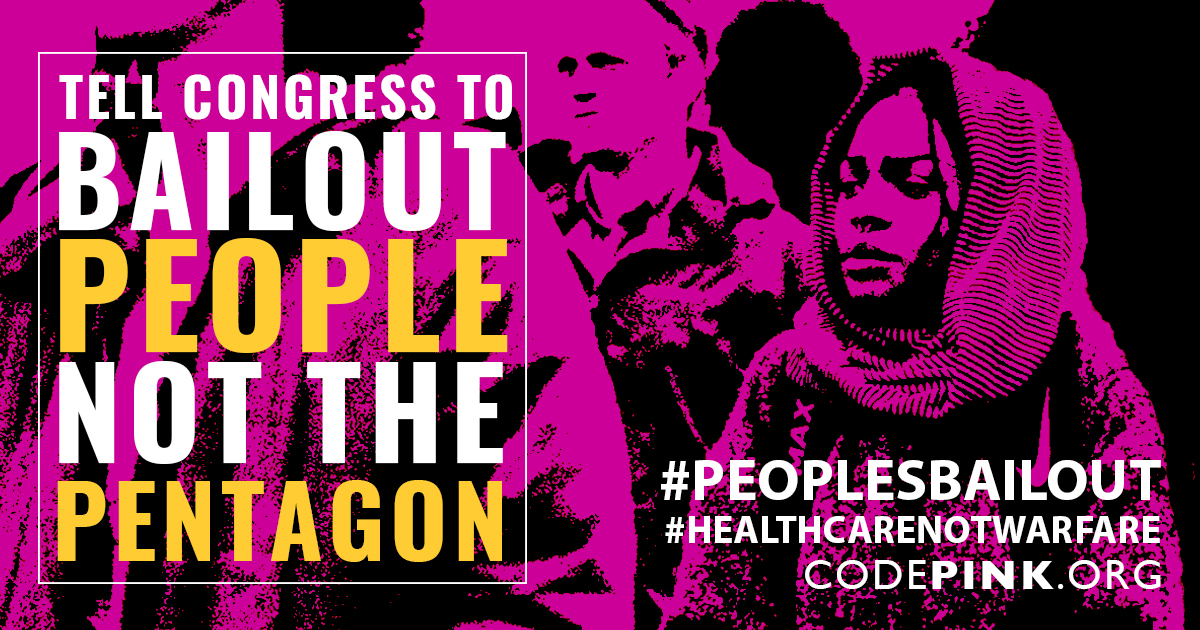 What has Congress been up to during a global pandemic?

Are they helping the half of all Americans who are now unemployed? No ❌

Are they working to expand healthcare to the millions who have lost their insurance? No ❌

Are they extending eviction moratoriums to ensure people have a place to live? No ❌

Sign on to our petition to tell Congress: Bailout people NOT the Pentagon and weapons manufacturers!

It is a moral outrage that while everyday workers are struggling to survive, the Senate is considering giving the Pentagon $30 billion more in funding in the next COVID-19 relief package for fighter jets, helicopters, radars, ships and armored vehicles. Is this to deploy more military on the American people? We need to stand up and be clear: we will not give one more penny to the Pentagon and weapons manufacturers during a global pandemic! Tell Congress: Bailout people NOT the Pentagon and weapons manufacturers!

Just last month, Congress had the opportunity to cut the Pentagon budget by a whopping 10% and invest in desperately needed jobs, healthcare, and unemployment benefits. Instead, they rejected a 10% cut to the Pentagon budget and approved a whopping $741 billion Pentagon budget. The representatives who voted against a 10% cut were 3 times more likely to take campaign contributions from weapons manufacturers. Now, lobbyists from companies like Raytheon and Northrop Grumman are banking on the fact that they can squeeze even more money out of the next COVID-19 relief bill. They might have the lobbyists, but we have people power. Contact your representative and demand that the Pentagon doesn’t get one more penny in the next COVID-19 relief package

We know that when we take collective action, we can win. This past May, CODEPINK activists and supporters helped secure a major victory by ensuring there was no new funding for the Pentagon in the Heroes Act. We have to keep up the pressure and Tell Congress: Bailout people NOT the Pentagon and weapons manufacturers!

P.S. Check out all of the actions and webinars that kept us busy last week!