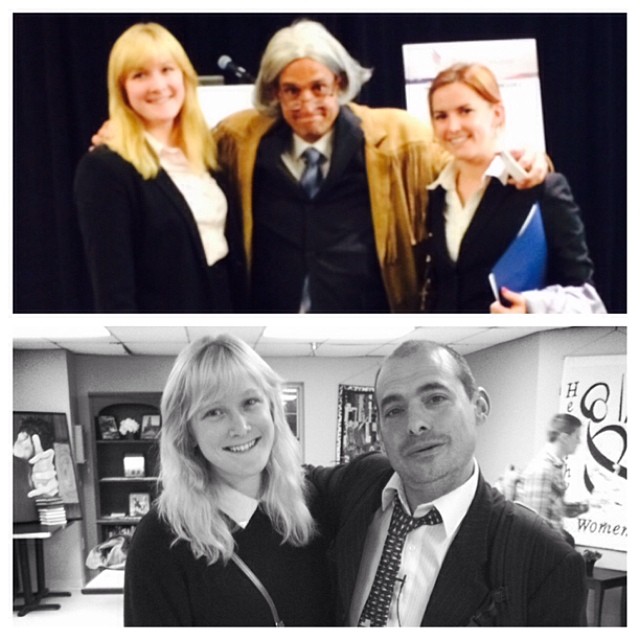 The CODEPINK DC crew was lucky to join the brilliant Yes Men team for their latest action, and this time they tricked the Department of Homeland Security. It’s been a while since we teamed up with them back in 2008 to publish the famous Special Edition of the New York Times, which fooled people across the country but gave the public a glimpse of what the world could really look like one day.

This action was meant to bring attention to the pressing issue of climate change and to underline the fact it is necessary–– and entirely possible–– to switch from fossil fuels to renewable energy. It was only one part of the growing movement to bring climate change to a screeching halt; last week in DC the Cowboy and Indian Alliance teamed up with 350.org and other organizations to host Reject and Protect, a week-long series of actions to protest the Keystone XL Pipeline that poses a major threat to the environment and promotes greater dependency on fossil fuels.

The action was an overwhelming success–– below is an excellent write-up from our friends Kevin Zeese and Margaret Flowers from Popular Resistance. Check it out, and be sure to watch clips of the action and an interview with Mike and Andy of the Yes Men on this Democracy Now segment! We’re definitely inspired –– and hope you will be too!!

By Kevin Zeese and Margaret Flowers

Contractors, lobbyists and officials attending the Homeland Security Congress in Washington DC yesterday did a “traditional” Native American circle dance to celebrate a fictitious new US government plan, the “American Renewable Clean-Energy Network” (AmeriCAN), to convert the US to 100% renewable energy by 2030. (Photos here; other material here.)

The conference attendees—including a retired Navy Admiral, a retired USAF General, a former Seal Team Seven leader, an aspiring Republican Congressman, lobbyists, and many homeland security contractors—applauded frequently during the stirring announcement by the US Department of Energy’s “Benedict Waterman” (actually Andy Bichlbaum of the Yes Men), as well as the eloquent speech by “Bana Slowhorse” of the Bureau of Indian Affairs (actually Gitz Crazyboy, a youth worker from the Athabascan Chippewyan First Nations, whose land includes the Alberta Tar Sands).

“Benedict Waterman”—a crazy-haired, bespectacled official supposedly from the U.S. Department of Energy—announces a revolutionary new energy plan to convert the U.S. power grid to entirely renewable sources by the year 2030, and give ownership of the new power-generation facilities to those on whose land they’re built—from Native American nations (thus serving as reparations for genocide) to anyone who puts a solar panel on his or her roof. 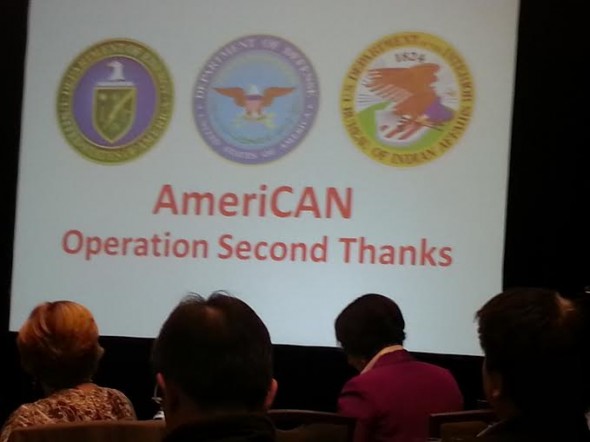 Slide showing the join project of Department of Energy, Department of Defense and Bureau of Indian Affairs, the AmeriCAN clean energy plan: Operation Second Thanks

The plan, “Waterman” announces, AmeriCAN (American Renewable-Clean Energy Network), will give us independence from the fossil fuel companies who are leading us to ruin, and will additionally create millions of jobs, eventually save half a trillion per year on health care costs, result in lower energy costs and greater price stability, and—bonus!—give our civilization a chance of surviving well into the future. (One such plan is described in some detail here.)

Why must we do this? There are several reasons, “Waterman” explains, but one of the main ones is that if we don’t, there will be revolution. The message is clear: it’s up to all of us, every citizen, to force our government to do the right thing. Magic solutions will never come from anywhere on high—not from government, and certainly not from the “market.” A survivable, happy future will only happen if all of us get active and do what we can, in whatever we can, to force our leaders to truly represent us. We are all the Department of Energy! 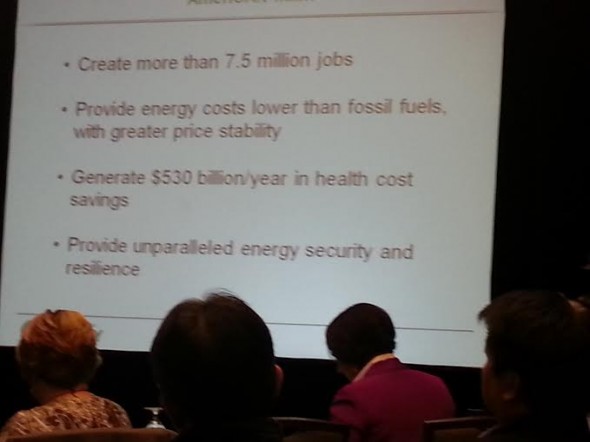 Slide showing some of the benefits of the clean energy plan: AmeriCAN

“Waterman’s” energy plan would redirect oil company tax breaks and subsidies to support renewables instead; commit “Manhattan Project-level” Defense spending to renewables in order to prevent future climate-change-related conflicts; and partner with Native American nations whose lands could provide all of our renewable energy needs. 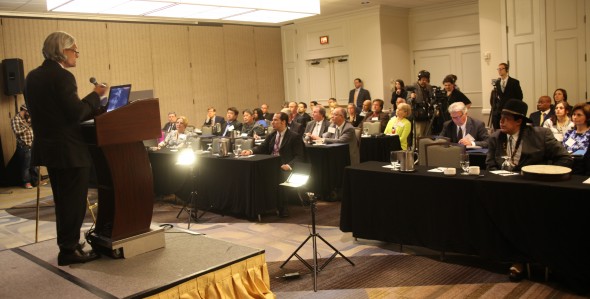 The plan, based on a number of sources including Stanford’s Solutions Project (FAQ here), would produce nearly 8 million jobs; save $530 billion per year in health-care costs alone; result in much lower eventual fuel costs and greater price stability; and provide much greater energy security. It would also reduce the risk of the climate change effects that are projected to cost the US at least $2 trillion per year by 2100 if nothing is done to address it. 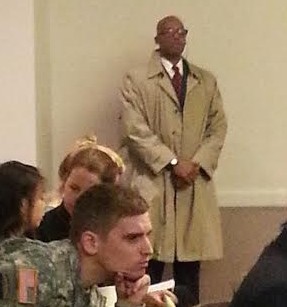 Kymone Freeman of We Act Radio played a security guard from Academi, formerly Xe and before that Blackwater, for General Colin Powell who the audience was told was coming to the conference as he had just been appointed to head Obama’s Energy Security Task Force.

Best of all, “Waterman” said, the plan would make a survivable future more likely. He also said that the government was enacting this plan because people are increasingly upset about climate change, and that if we don’t take revolutionary action today, there could be a real revolution tomorrow. The conference attendees applauded this statement too.

The fake DoE announcement was followed by a stirring speech by “Bana Slowhorse” of the Bureau of Indian Affairs (actually Gitz Crazyboy, a youth worker from the Athabascan Chippewyan First Nations, whose land includes the Alberta Tar Sands). “Bana’s” speech concluded: “We are all the Department of Energy.”

After the announcement all attendees including representatives of the Department of Homeland Security and corporate contractors then danced a “traditional celebratory circle dance” to the singing of “Drum Chief Four Feathers” (actually Tito Ybarra, an Ojibwe comedian and singer) celebrating renewable energy.

After the event, two dozen contractors lined up to hand “Waterman” and “Slowhorse” their cards and offer their services in carrying out the conversion. 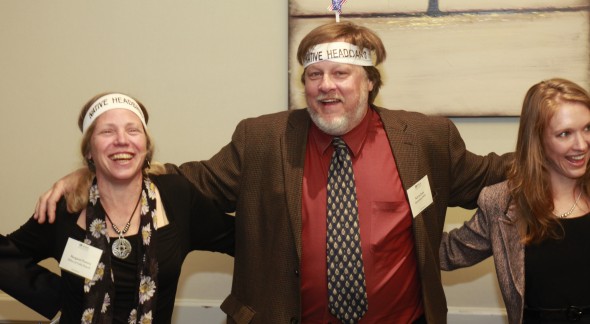 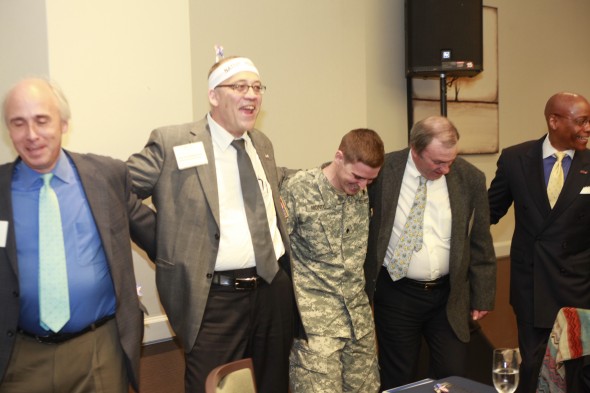 Homeland Security contractors dancing, person in uniform is Matt Howard of Iraq Veterans Against the War.

The action was intended to spread two messages: first, that a complete renewables conversion is indeed possible today, with our current technology; and second, that it will only happen if millions of people take action to force our leaders to truly represent us. 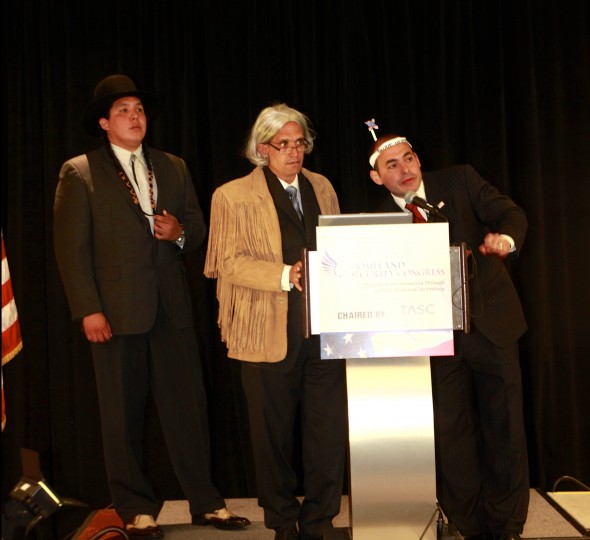 Gitz Crazyboy , Andy Bichlbaum and Mike Bonnanno ( of the Yes Men playing a representative of a public relations firm for General Colin Powell who the audience was told chaired a task force on the new energy program) take questions from the audience

Besides the Yes Men, Crazyboy, and Ybarra, there were many participants in this project, including members of the Black Mesa Water Coalition, Idle No More, Yansa.org, Iraq Veterans Against the War, Greenpeace, Popular Resistance, We Act Radio, It’s Our Economy, Veterans For Peace and CODEPINK. And, of course, the conference attendees.