The US-Bahraini Exchange: Tear Gas From Us, Kindness in Return

Today’s  demonstration in Bahrain’s capital, Manama, started out as a festive affair. This was a permitted march, so parents felt it was safe to bring their children. Women with flowing black abayas, toddlers in tow, moved into position with a sense of determination and excitement. Today, February 13, was one day before the February 14 anniversary marking a year since the uprising began. All week long the demonstrations have been growing and growing in anticipation. Today was the largest yet. 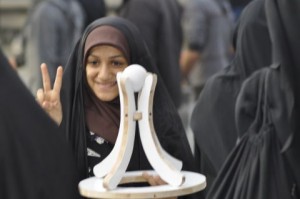 Tens of thousands of people flooded the main Budayia road. First were the men, mostly young; then came the women. They were shouting defiant chants like “We won’t obey your orders; we will break the chains.” They were calling on the prime minister to step down, shouting “Forty years is enough!”

My favorite sign was one contrasting the U.S. views toward Syria and Bahrain. On one side was Barack Obama and Hillary Clinton above gruesome, Syrian bodies, chastising Assad. On the other side was Obama and Clinton above gruesome, Bahraini bodies, remaining silent. The Bahrainis want to know why the U.S. has such double standards. Not only is the U.S. government going ahead with multimillion dollar arms sales to Bahrain, but the tear gas that was about to envelop us came from the good ‘ol USA.

About 20 minutes after the march began, the group at the front arrived at Al Qadam roundabout. They were supposed to continue straight ahead, but some decided to veer off to the right to try to reach the coveted destination: the Pearl Roundabout. For those who haven’t followed the struggle in Bahrain, the Pearl Roundabout was like Egypt’s Tahrir Square, where Bahraini protesters had camped out for about a month before they were brutally evicted by the police. In an attempt to totally squash the protests, the government had bulldozed the entire square, including the iconic monument in the middle made up of six sails projecting up to the sky and coming together to hold a giant, shining pearl. 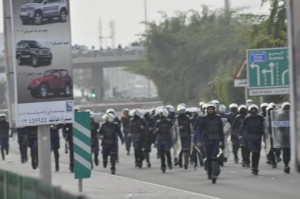 The men, trying to protect the women from any police repression, set up a blockade to push the women onward toward the permitted march. Meanwhile, thousand of young men started sprinting towards the Pearl Roundabout. Although the protest was totally peaceful, the police (most of whom are not Bahraini and many of whom don’t even speak Arabic), responded with an overwhelming barrage of teargas, as well as birdshot and rubber bullets.

We all began choking, struggling to breathe, our eyes on fire. I had put on my gas mask, but it did nothing to stop my eyes from burning. It was so bad I had to close them and walk, stumbling along blindly. Luckily, one of our local friends, Mohammad, grabbed my hand and pulled me to the side.

A person with a carload of passengers saw us. He pulled the car off the road and the passengers jumped out to make room for me, Tighe, Mohammad and two other Americans in our group. A perfect stranger, the driver took terrific care of us and thanked us for bearing witness to their struggle.

This is something we hear repeatedly. While we feel shame about our government’s role in propping up this regime, the local people have been treating us with such kindness and generosity. I hope some day we can repay them. 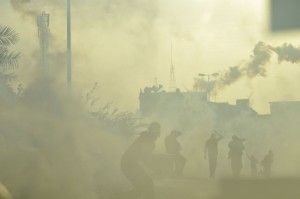 Several hours later, the protests subsided. At 10pm, the locals repeated what has been become a ritual this week: they stand on their balconies and shout—at the top of their lungs and over and over again—“God is great; God is great.” The words are not only a prayer, but also a warning to the government: “We will only obey God, not you.” The echoing of the chant through village after village is chilling. In each voice you can hear pent up rage, frustration, pride, determination.

Tomorrow, millions of Americans back home will be celebrating Valentines day with flowers and chocolates, perhaps even breakfast in bed. In Bahrain thousands upon thousands of peaceful freedom fighters will celebrate by getting out into the streets, showing their devotion to the country they love so dearly that they are willing to put their lives at risk to help set it free.