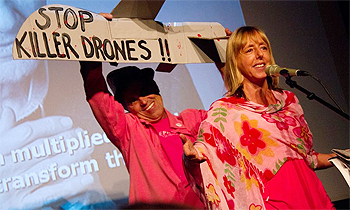 Over the last few weeks CODEPINK and others across the world have been in the streets almost every day protesting the Israeli massacre in Gaza, in which over 1,400 people have been killed and thousands more injured.

The LAPD is debating the Drone issue. Local law enforcement offices are eager to be the first to have their own fleet of drones here in the US and that Obama has granted the CIA the authority to kill people in Pakistan and Yemen using drone “signature strikes” based solely on suspicious behavior?

Medea Benjamin’s new book: Drone Warfare, Killing by Remote Control is a well-researched investigation of these deadly weapons and how we can build a movement to stop them. Come hear Medea speak!

The evening of conversation and inspiration will be hosted by Jodie Evans, co-founder of CODEPINK.