At CODEPINK, we do a lot with a little, and our work is only possible through your involvement and financial support. Your tax-deductible donation will help us build on our successful campaigns during the next year by continuing to speak truth to power. Will you chip in to help supercharge CODEPINK’s work in 2021?

Thanks to your generosity, last year was an incredibly effective year at CODEPINK! We invite you to journey with us through the campaigns and successes we celebrated in this past year.

The year 2020 has been synonymous with transformation, transition, crisis, and opportunity.

January 2020 started with World War III breathing down our necks after the U.S. murdered Iranian General Qasem Solemani. Horrified by the event and the precipice it put the world on, CODEPINK immediately organized over 100 protests across the country in 24 hours. Days later, we joined a national coalition, and the actions swelled into the hundreds. The message to the Trump administration and the Iranian people was loud and clear: The American people do NOT want war with Iran! ☮

Just when we thought we could breathe a sigh of relief, COVID hit, and it became more evident than ever that we live as ONE PEOPLE on ONE PLANET. On top of already suffering brutal sanctions, Iran was hit extra hard with COVID and it forced us to cancel our fifth friendship delegation to Iran. Instead, many of you joined us as we raised much-needed funds for Iranian children. Then, we donned masks and hazmat suits to protest outside the Treasury Department, and we mobilized people yet again to jam their phone lines, demanding the horrific sanctions on Iran be lifted. 🇮🇷 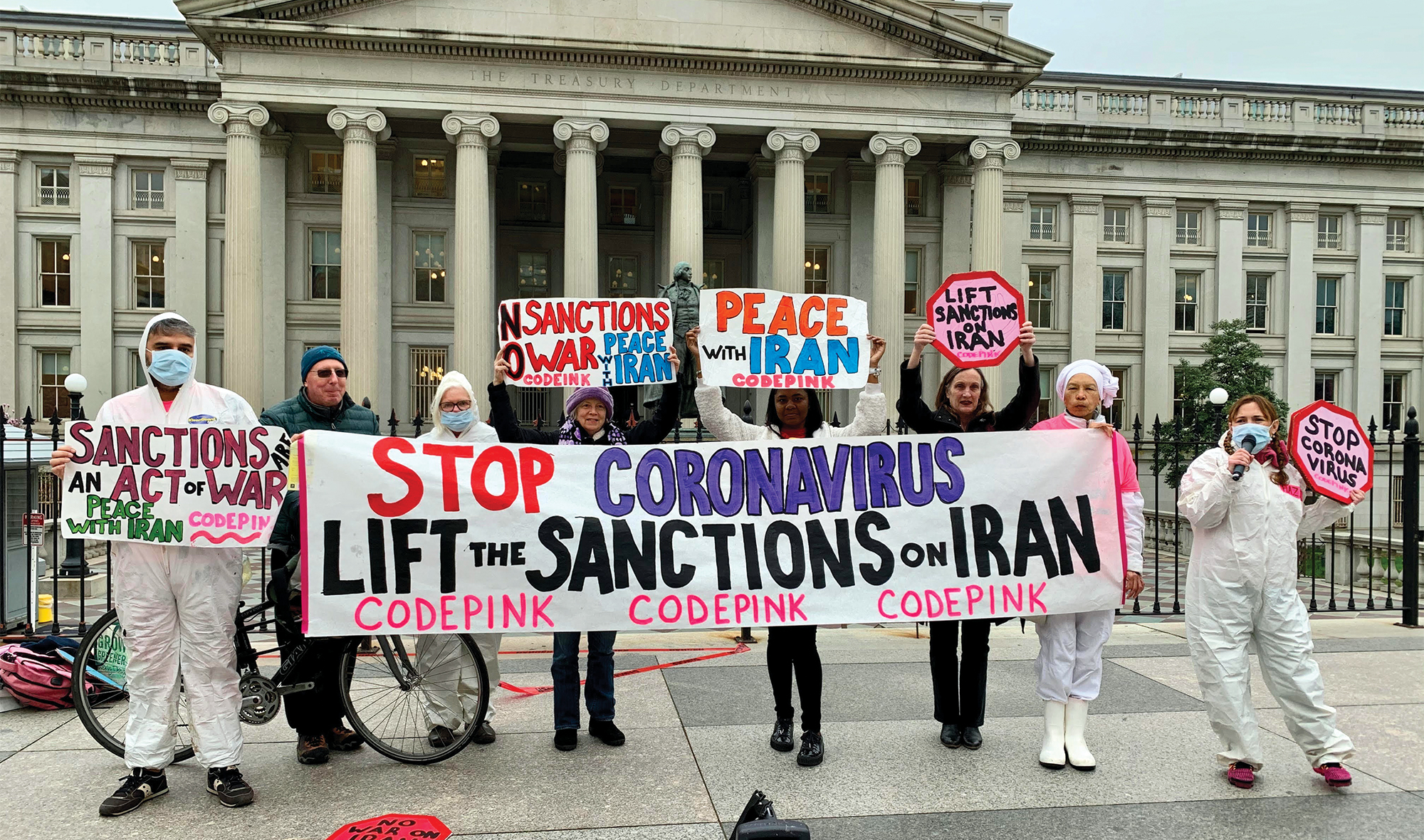 The onset of the coronavirus pandemic revealed how necessary Local Peace Economies are. CODEPINK collected and created essential Love in the Time of Corona resources to support our community. In response to the murder of George Floyd, we organized in the streets and online with BLM resources, while educating about the deep connections between militarism abroad and militarism at home. Throughout the year we continued our support of the Poor People’s Campaign, sharing tools for local engagement to end militarism. 🙏🏿 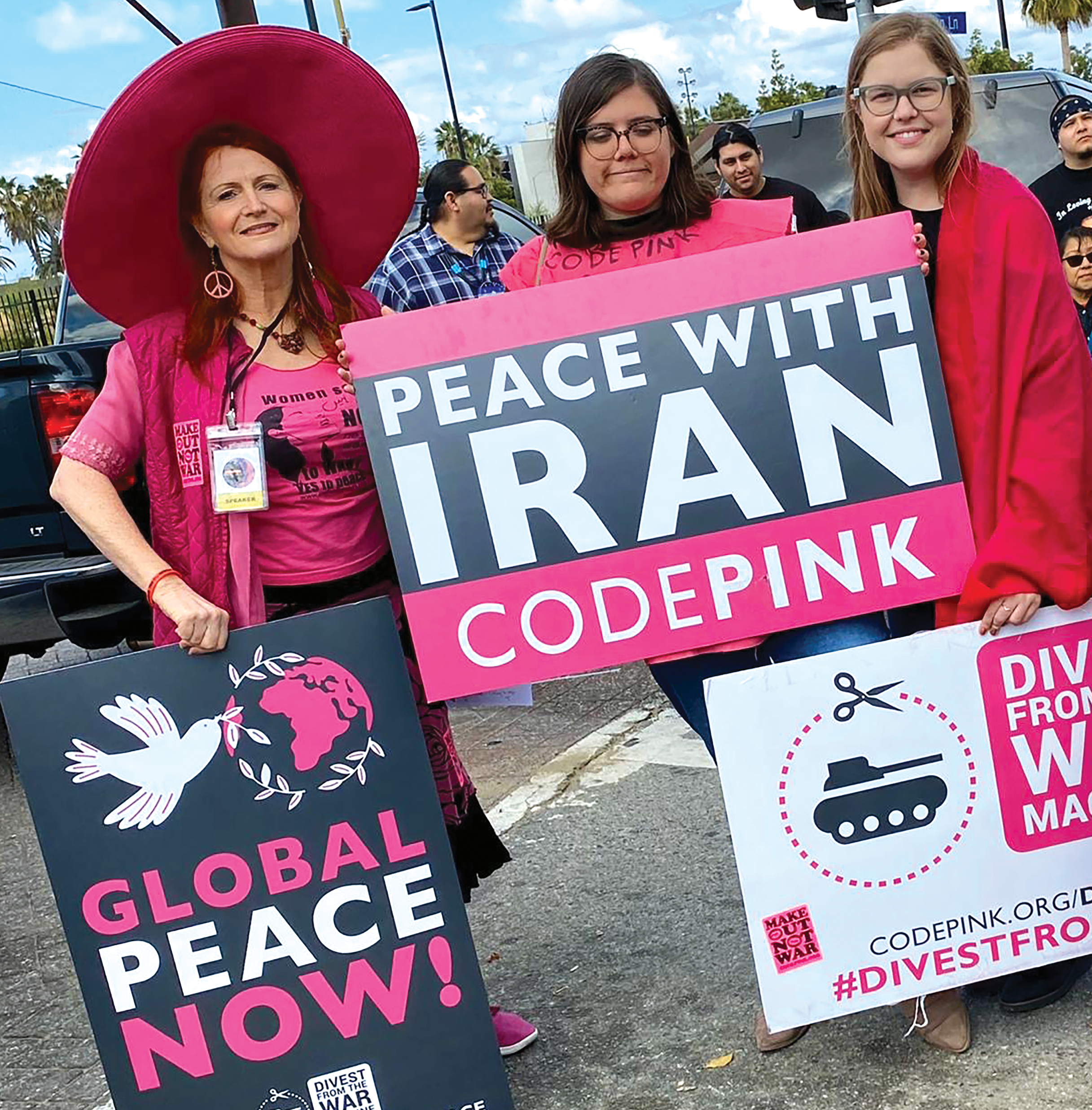 Big wins for our Divest from War Campaign.

Our Divest from the War Machine campaign has resulted in the divestment of over $550 billion in assets, including Amalgamated Bank! 💃🏻 Many cities such as San Luis Obispo, California — a city teeming with weapons manufacturers — have divested. Chicago, Philadelphia, NYC, and cities across Oregon are using this victory to propel their campaigns.

For the first time in CODEPINK history, our coalition was successful in having 116 congress members vote to cut the Pentagon Budget, and 30 congressional candidates took our pledge to divest from the war machine by refusing support from weapons companies. Despite it being virtual, CODEPINK once again disrupted BlackRock’s shareholder meeting, where we were able to put the company in the hot seat about its lack of human rights policies by voting against the re-election of Larry Fink as CEO of BlackRock. Under his leadership, the company has been ballooning its investments in companies responsible for burning the planet and profiting from war and conflict. CODEPINK’s BlackRock campaign has built strong alliances with climate change activists across the globe, making splash appearances at direct actions coast to coast.

The need to socially distance inspired us to create a five-part Divest from War webinar series, bringing together over 20 speakers and 1,200 participants. We also launched a comprehensive guide to University Divestment, inspiring students to demand their schools stop “making a killing from killing.”📚 In 2021 we plan to strengthen our campaigns to divest and continue our work with Congresswoman Barbara Lee to cut Pentagon funding in half. We need those funds redirected to human needs! 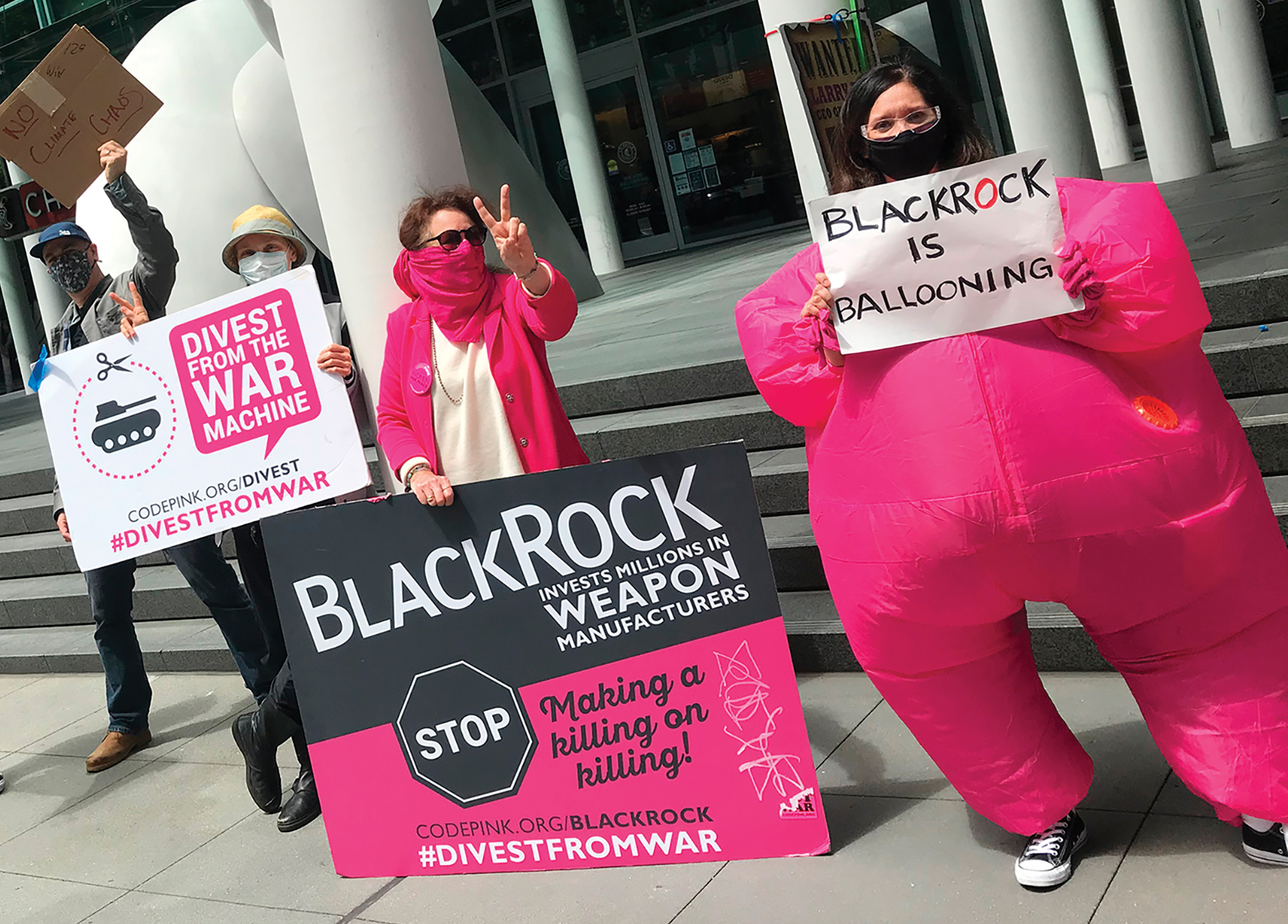 In pursuit of peace and justice in the Middle East, we worked with partners around the world to hold the Saudi monarchy accountable for its crimes. We organized a massive mobilization, inspiring high-profile participants to drop out of this year’s G20 hosted by Saudi Arabia, including the mayors of Los Angeles, New York, Paris, and London.✊🏾 We also continued our fight to free all Saudi political prisoners, including women’s rights activist Loujain al-Hathloul.  Our efforts for Yemen remain steadfast, even as the Trump administration continues U.S. support for the Saudi-led assault of the country.

In 2021, we will launch our Stop Arming the Middle East campaign as more weapons sales are going to Congress for approval.  No matter who is in the White House, our work for Palestinian rights continues until our friends living under occupation finally achieve freedom and equality. We did not stay silent after the UAE, Bahrain, and Sudan “normalized” relations with Israel. We aren’t fooled by fake peace deals, so clad in pink keffiyehs and face masks, we protested outside the White House with the Palestinian-American community. We must bring an end to draconian U.S. sanctions that devastate too many countries.  We have disrupted, organized, and engaged across the country, despite bully-in-chief Trump not only unbending but continuing to tighten the screws. 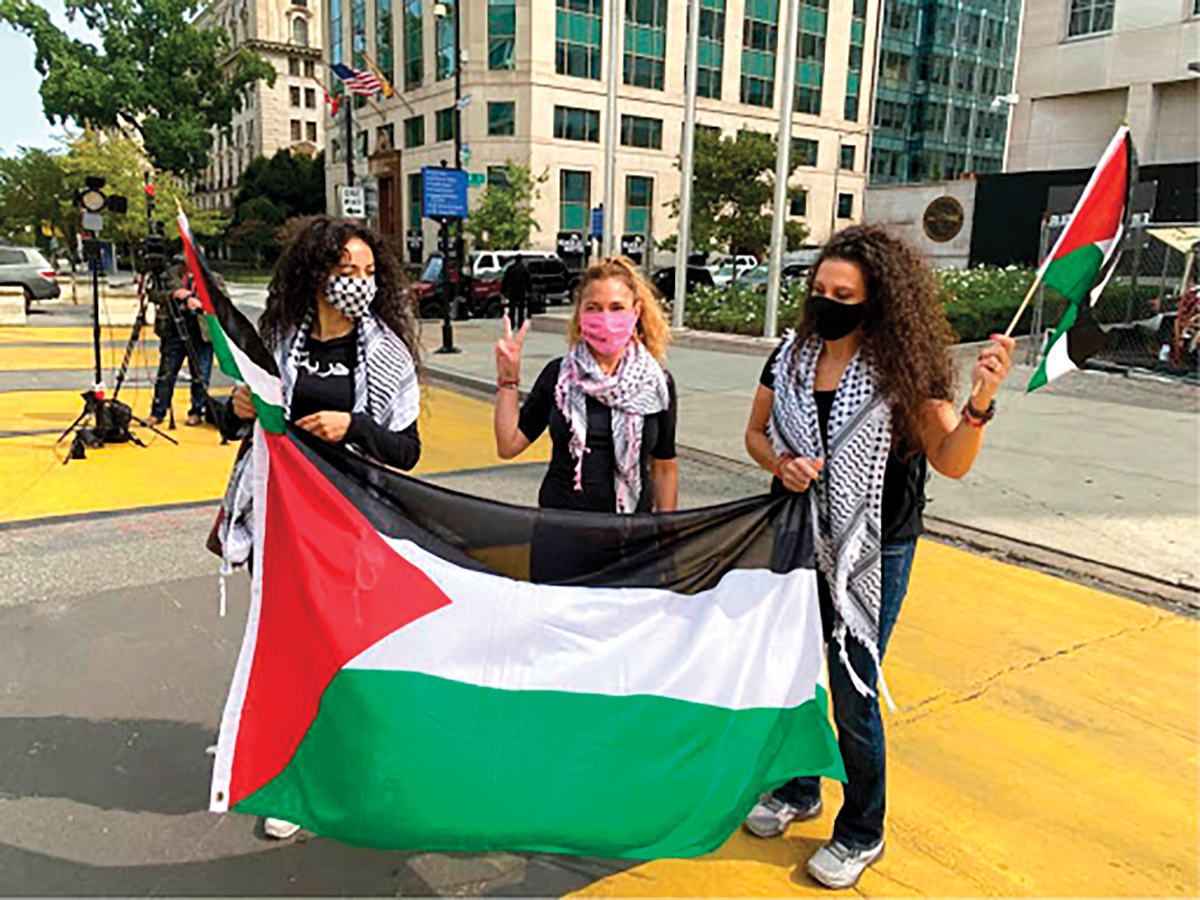 This year was challenging for Latin America, as the Trump administration relentlessly piled on the pressure. We were just as relentless in response and created a new campaign calling for a Good Neighbor Policy, as we are ALL learning the value of being a good neighbor. A highlight of this year was interrupting warmonger Elliott Abrams! We successfully pushed Twitter to restore banned accounts belonging to Venezuelan journalists, and protested outside the British Embassy for the return of Venezuela’s gold. We launched a call to award the Nobel Prize to Cuban doctors to emphasize what a global peace economy looks like. 🏅‍️

We led an electoral observation delegation to Bolivia and witnessed an amazing reversal of the 2019 coup and restoration of democracy,  🎉  immediately calling for the resignation of Luis Almagro, Secretary-General of the Office of American States. Over this year, we have grown our coalition to 100 organizations, and education remains one of our top priorities, as misinformation is rampant. We are excited about next year, with Senator Sanders interested in joining the call for a Good Neighbor Policy. 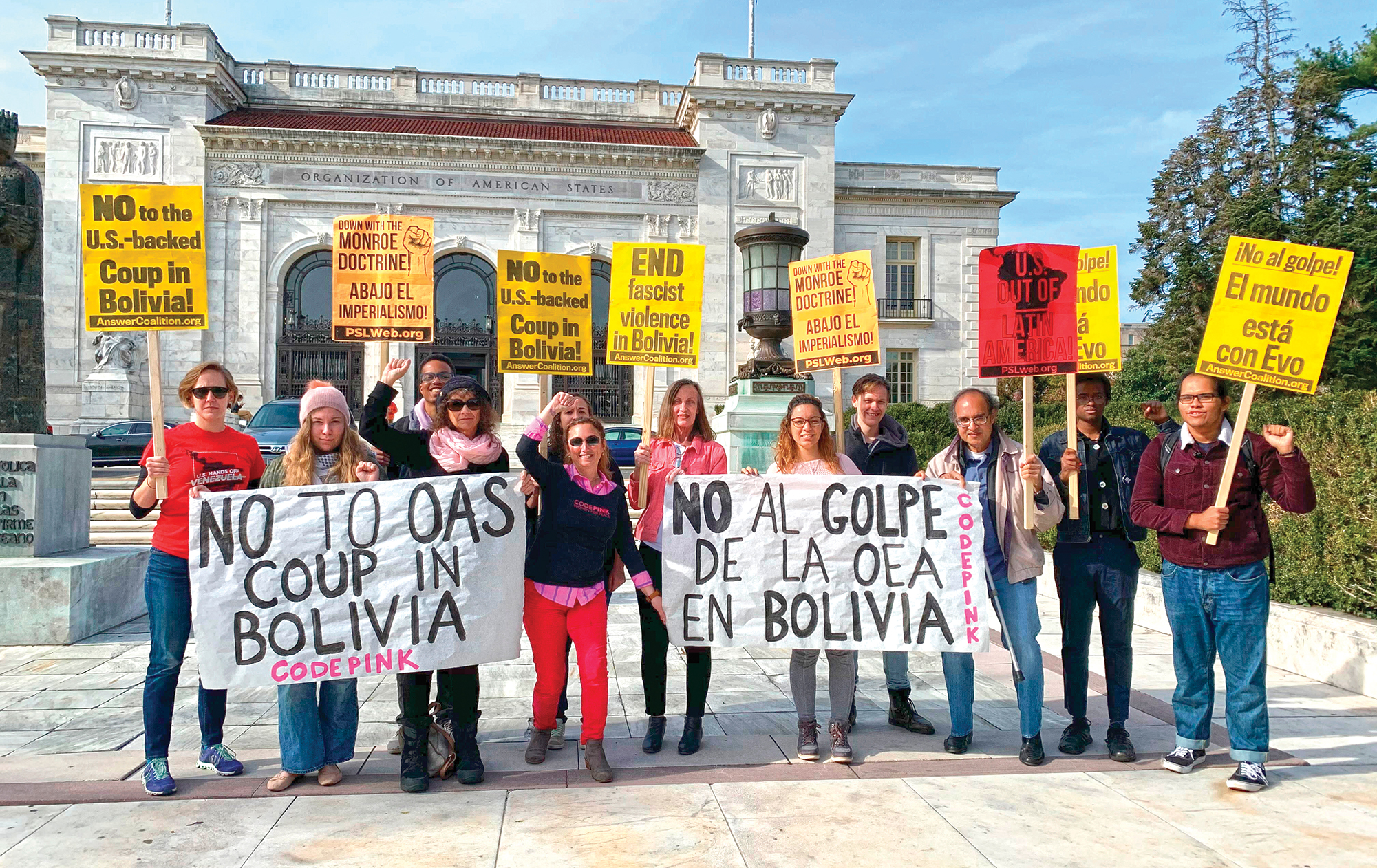 Pushing for peace with China.

Part of cultivating peace means preventing new wars (both cold and hot), this time with China. Anti-China rhetoric is spewing from both political parties and the media, igniting racist, sinophobic violence here in the U.S. Even more frightening is the growing cold war that could bring the world to the brink of a nuclear war. In response­­­, we launched our China is Not Our Enemy campaign. People know so little about China beyond Western propaganda. We are accumulating and sharing a wealth of information to help the American people understand the need for cooperation, not war — our health and life on this planet depends on it. 🇨🇳 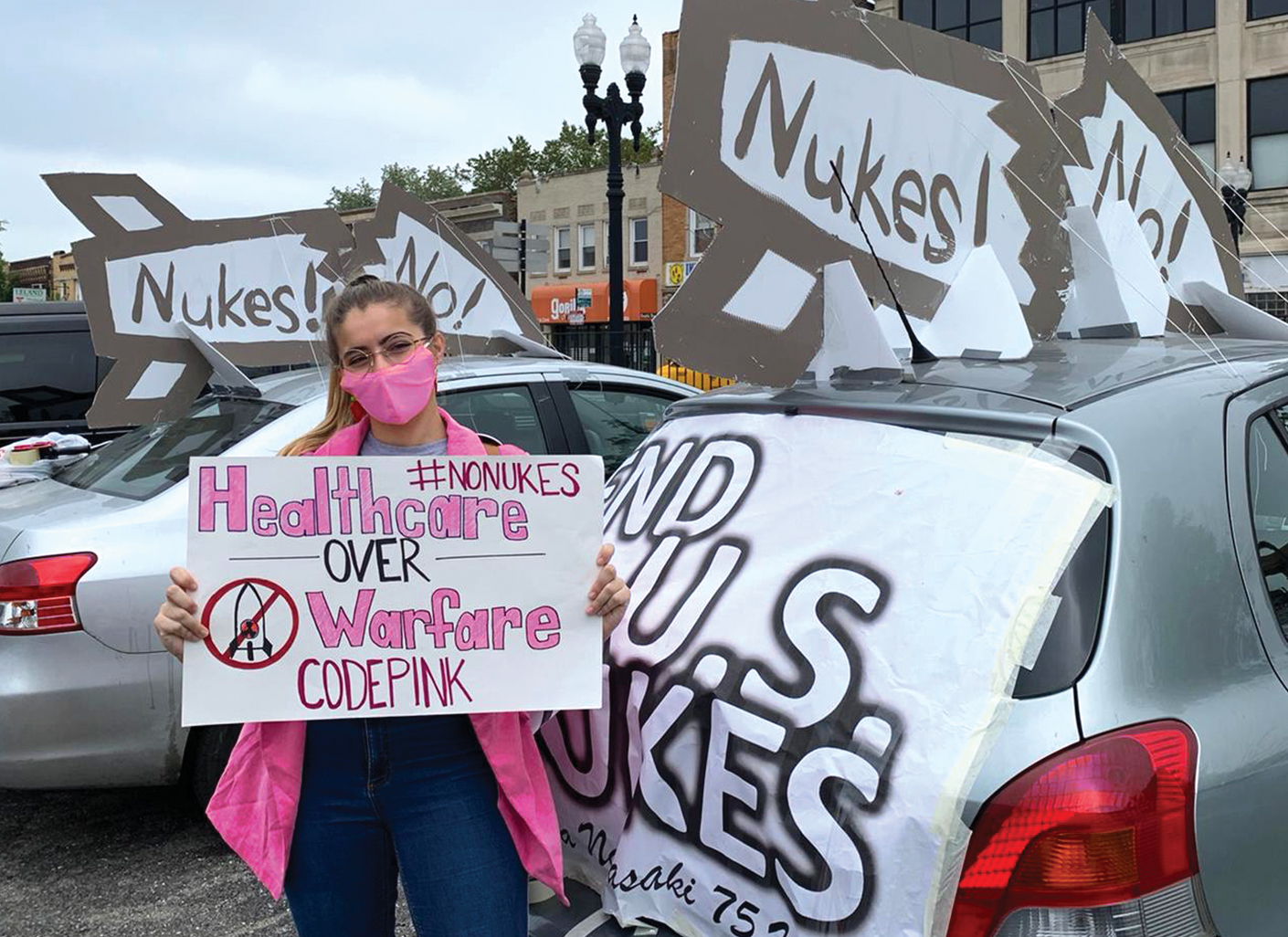 Recognizing the stranglehold of the toxic, male-dominated, military-industrial complex, we spent the year gathering thinkers, educators, activists, and leaders from around the world to illuminate what a feminist foreign policy could look like. We need a feminist restructuring of global relations. 🌎 In 2021, we will continue hosting thought-provoking webinars with inspirational, forward-looking thinkers, working directly with Women’s and Gender Studies Departments in universities, and collecting teaching tools in our digital library. We must change the culture of war to a culture of peace! 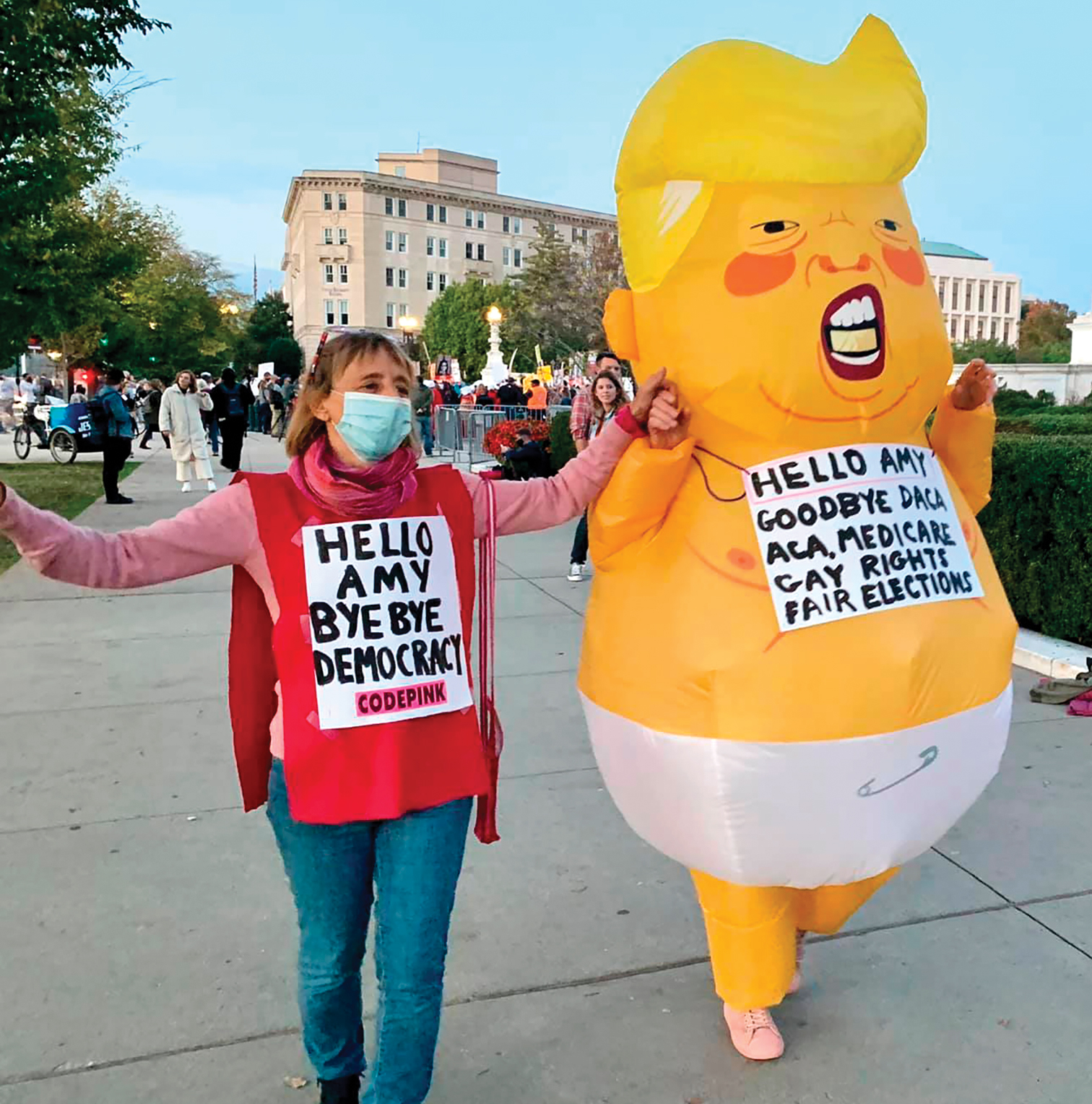 🗳️ As we do every four years, we continued calling for a President for Peace. This was the first time in our history we couldn’t disrupt the DNC or RNC to point out their warmongering stance, but we still made trouble by delivering letters, sharing educational materials and coalition asks, and demanding pro-peace policies from this year’s candidates. Though we were shut out of the streets and the halls of Congress for much of this year, we reached millions with our dynamic online presence, including sharing information-packed videos, hosting close to one hundred thought-provoking webinars, and a maintaining a daily presence on Twitter, Facebook, and Instagram that reached millions of users.

Our weekly radio show 🎙 that airs in DC (WFPW) and NYC (WBAI) is being picked up by more stations, our articles appeared in publications such as The Hill and The Guardian, and our team has done nonstop interviews with outlets from Fox News to Democracy Now to Al Jazeera.  From social distancing-friendly peace caravans to fighting to save the USPS to War Is Not Green actions and protesting drones in the Nevada desert, there was more action than we can talk about.  So we added a new feature, Last Week at CODEPINK, to keep you informed. 📣

This year is closing with a major organizational change at CODEPINK: After 18 kickass years, co-directors Jodie and Medea have stepped back to usher in the leadership of three younger, brilliant, capable, and peace-loving women. The new co-directors are Farida Alam, our multi-talented web and art designer with 15 years at CODEPINK under her belt; Ariel Gold, our ongoing co-director and a Middle East foreign policy expert; and Carley Towne, the dynamo organizer and activist who directs our Divest from War campaign and keeps CODEPINK engaged. 🤝🏽

We know that the year ahead is full of work, but also full of opportunities. Going into 2021, Ariel, Carley, Farida, and the entire CODEPINK team are leading forward with more campaigns than we have had in our history, with a renewed energy in the movement, broad collaborations, and unwillingness to back down to warmongers and weapons manufacturers. This includes Joe Biden, who has promised to return our country to “normal.” But does “normal” mean kowtowing to weapons manufacturers, retaining bloated Pentagon budgets, continuing support for Israeli apartheid, imposing neoliberal policies on Latin America, and creating a new conflict with China?  No. We have to redefine “normal” as a country that stops arming human rights abusers, acts like a good neighbor to Latin America, stops the new cold war with China, and ends wars and weapons for profit.

This is why we will be leading forward to bring a just and principled feminist foreign policy into being. We thank you for engaging with us to change the culture of this country from a culture of war to a culture of peace! Deep gratitude for all you do and give!

Onward to peace with love, 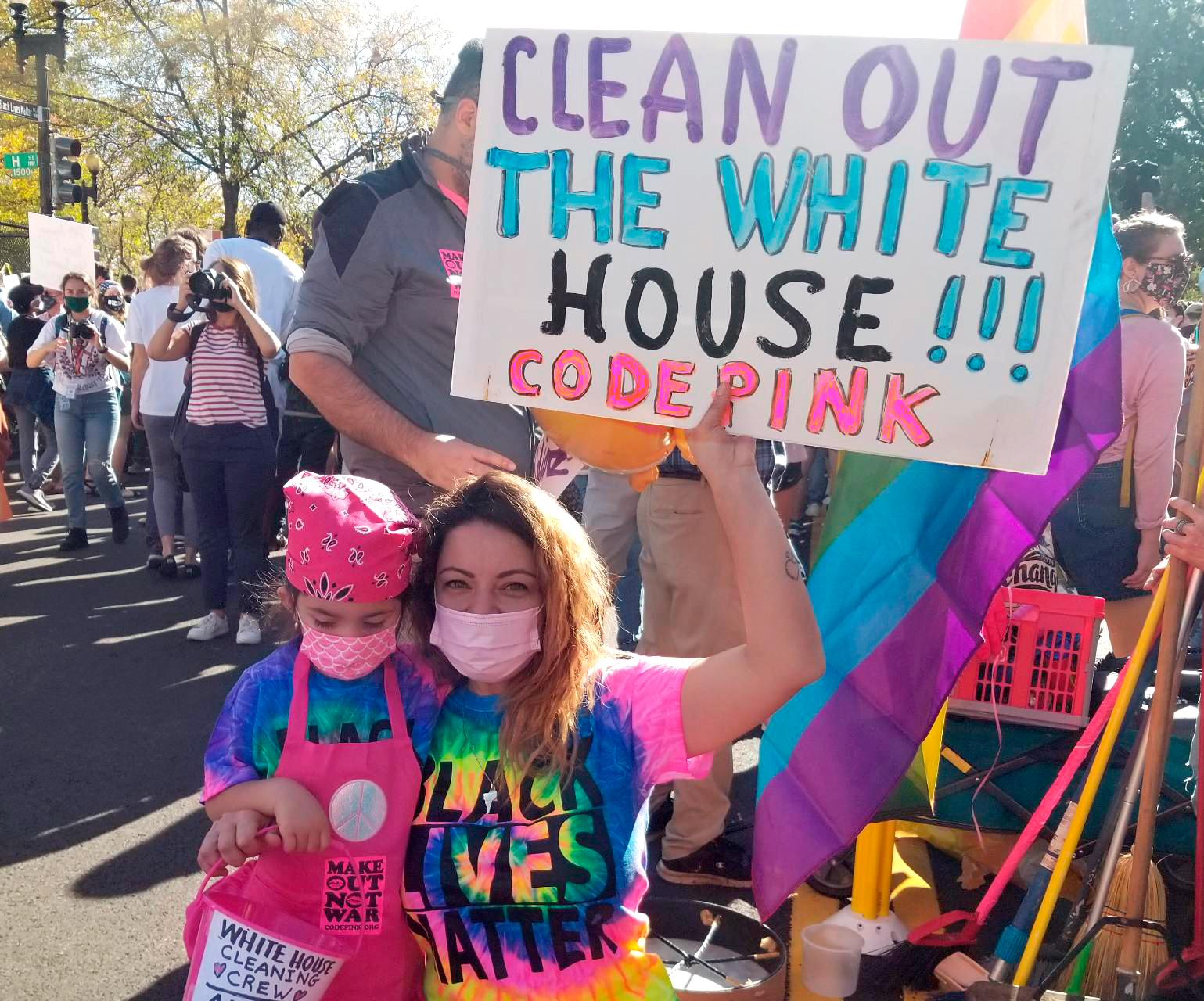