CODEPINK will be mobilizing nationally to Nevada to shut down American-funded militarism, occupation and war! Join us for these events:

CODEPINK and allies will be staging actions as part of a national mobilization to the RE/MAX R4 Convention March 2-4, 2015 at the Mandalay Bay Resort, Las Vegas to protest RE/MAX’s selling of stolen Palestinian land in the West Bank, as part of our Boycott RE/MAX: No Open House on Stolen Land (LINK: boycottremax.org) campaign. RE/MAX International is selling settlement properties through RE/MAX Israel on confiscated Palestinian as it profits off of Israel’s illegal occupation and system of settler-colonialism. The mobilization will target the RE/MAX R4 Convention, the largest annual gathering with over 6,000 RE/MAX representatives in attendance from more than 60 countries around the world. We will be staging a three day presence outside the event which includes speakers like top RE/MAX executives, Peyton Manning, and even a performance by Aerosmith frontman Steven Tyler. Join us for community building, direct action, and of course to meet fellow activists from across the nation in PINK! 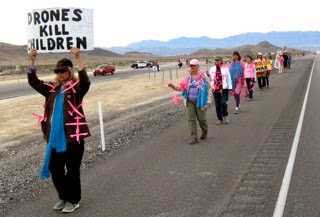 Join CODEPINK at Creech Air Force Base, Indian Springs, Nevada, for a national mobilization of nonviolent resistance to shut down killer drone operations in Afghanistan, Pakistan,Yemen, Somalia, and everywhere. In 2005, Creech Air Force Base secretly became the first U.S. base in the country to carry out illegal, remotely controlled assassinations using the MQ-1 Predator drones, and in 2006, the more advanced Reaper drones were added to its arsenal.Sponsored by CODEPINK: Women for Peace, Nevada Desert Experience (NDE), Veterans For Peace (VFP), Women’s International League for Peace and Freedom (WILPF), Voices for Creative Nonviolence (VCNV) and others.

Donate to bring CODEPINKers to Nevada to #ShutDown militarism!

(Please note this is preliminary and subject to change)

PRELUDE to Mass Convergence for Peace:
March 2 to March 3:
CODEPINK and Supporters (everyone welcome) will initiate the convergence with Daily Vigils at the south entrance to Creech AFB, mornings (6-8) and afternoons (3-5). Let's create a mile long trail of peace banners and signs along the highway! Midday to include optional activities and excursions in the beautiful Nevada desert, a chance to bond with fellow anti-drone activists and trips to Las Vegas to join CODEPINK's actions at the REMAX Convention: #ShutDownREMAX


THE PROGRAM: THE MASS CONVERGENCE BEGINS

A host of peaceful nonviolent actions of resistance will be planned.
Supporters, legal observers, and many who avoid risking arrest are greatly needed.
Scenarios will be developed by committee prior to March 4th.