Shut Down Creech Arrestees return to Las Vegas for Arraignment 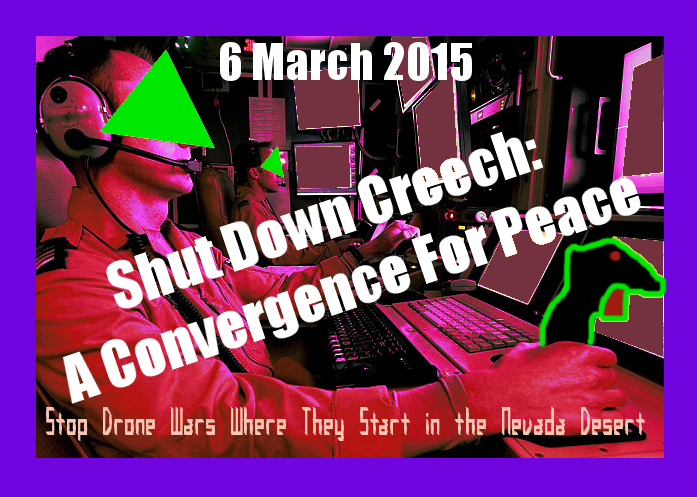 On Tuesday June 30th Eleven participants from March 6th Shut Down Creech event appeared at the Clark Co. Court House before Judge Melissa A. Saragosa to be arraigned for the charges of Trespassing (not amounting to Burglary) with one attendant Robert Majors facing a different charge of Obstructing a Public Sidewalk. The morning began with a vigil and media statements given in front of the Court House. Supporters were in attendance and media outlets Fox News, Las Vegas Sun Times, and the Associated Press were on the scene taking statements. Before entering the court house the group broke into chants of "When Drones Fly Children Die!" and similar statements such as, "The Whole World is Watching!", while holding panels of artistic renderings of many of the child victims of drone attacks in Pakistan and Yemen.

After over an hour and a half of courtroom business as usual the Judge began calling up the activists. First she called the names of many who were not in attendance, including those who wrote in their pleas of "Not Guilty" and those who accepted a Plea deal offered by the District Attorney. The first among those accepting the plea was "Mary" Ann Wright. The plea consisted of a $50 fine and the agreement to "stay out of trouble" and stay off Creech Air Force Base Property for six months. Those not in attendance were graciously represented pro-bono by Las Vegas attorney Allen Lichtenstein who made definite points in each plea case that "staying away from Creech" was to be interpreted as not including the County land surrounding the base property and the Judge agreed.

As the Judge called up the first activist defendant present, Fred Bialy, she revealed that she is an Air Force reservist and former active-duty Air Force Judge Advocate. In spite of the apparent potential bias, she declared that she would be impartial. The defendants accepted her reassurances and did not express serious concerns about this potential for bias in the pending trial. Retired Dr. Bialy of Vallejo CA pled "No contest" to the charges and was able to offer his statement. He read a prepared statement that highlighted why the drone killing program is immoral and inhumane and that as a physician it is in his nature to prevent harm. Following him was documentarian Mauro Oliveira from Montgomery Creek California who explained the CIA’s role in the drone program, revealing that the same officials running the torture and rendition programs were running the drone program. The last activist allowed to make his statement was Franciscan Friar Louis Vitale, 83, who spoke eloquently of the need to pursue peace in the nation and the world. He also gave a specific example he experienced while in the Air Force, where his command was ordered to shoot down an aircraft identified as Russian but reluctance by him and others led to an intercept flight to make visual contact with the aircraft which turned out to be an American Airlines passenger jet.

All three pleading No Contest were sentenced only with "Time Served."

The remaining Activists in attendance all entered a plea of "Not Guilty" and worked with the Judge to organize trial dates for themselves and those not in attendance entering the same plea. Those present who entered a "Not Guilty" plea were Christine Nelson of Chico CA (recent widow of Veteran Activist Michael Pike), Shirley Osgood of Grass Valley CA (Grandmother for Peace), Michael Kerr of Bay Point CA (VFP), Barry Binks of Sacramento CA (VFP), Flora Rogers of Marysville CA, VFPs Ray Cage and Dennis Duval of Prescott AZ, and Robert Majors local Las Vegas Catholic Worker. The individual trials are all set for October 26, 27, 28th.