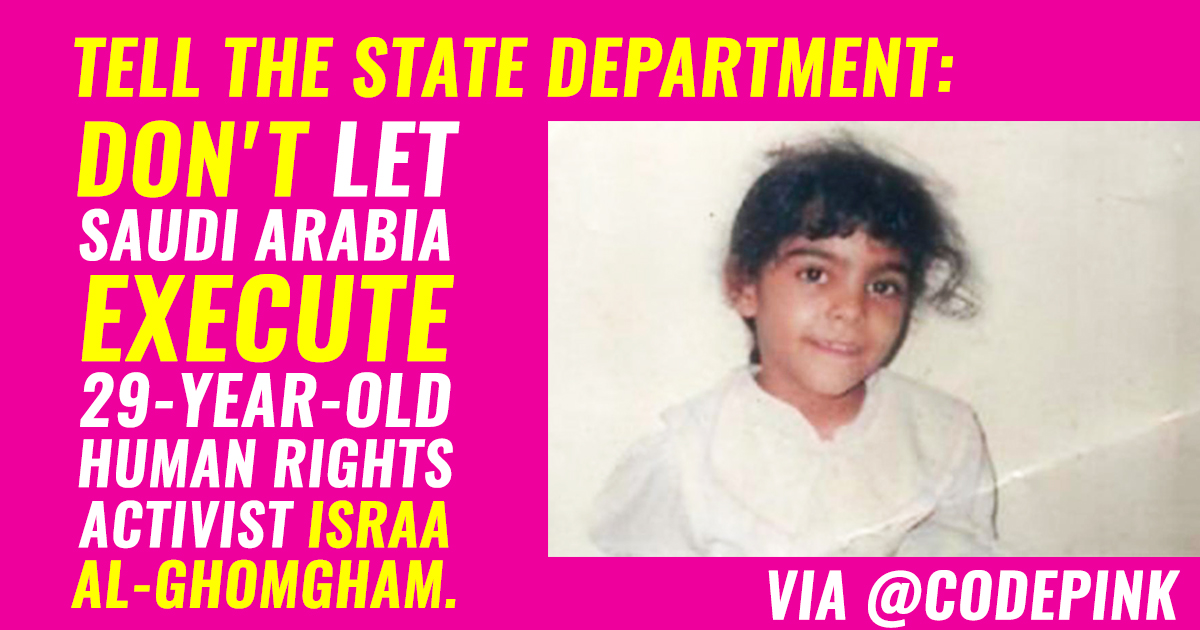 Sign this petition to show your solidarity with Saudi activists and call on Secretary Pompeo to condemn the Saudi government crackdown on activists and publicly call for their unconditional and immediate release.

We are appalled that the Saudi government is seeking to execute women’s rights activist Israa al-Ghomgam, who has been imprisoned since 2015. She faces the death penalty, along with four other individuals who dissented against the repressive Saudi regime. We to call on you to condemn the crackdown on women’s rights advocates in Saudi Arabia and publicly call for their unconditional and immediate release.

Israa’s life is on the line. And at least 13 other women are currently being detained for their activism, including Samar Badawi, a leading advocate for women’s fundamental rights and a winner of the Department of State’s International Women of Courage Award in 2012. She was arrested and imprisoned as part of a broad crackdown on human rights advocates.

“Sentencing Israa al-Ghomgam to death would send a horrifying message that other activists could be targeted in the same way for their peaceful protest and human rights activism.” says Amnesty International’s Middle East Director of Campaigns, Samah Hadid. “The charges against Israa al-Ghomgam, which mostly relate to her peaceful participation in protests, are absurd and clearly politically motivated to silence dissent.”

It is imperative that you take action. Condemn the crackdown on Saudi activists and call for their unconditional and immediate release!