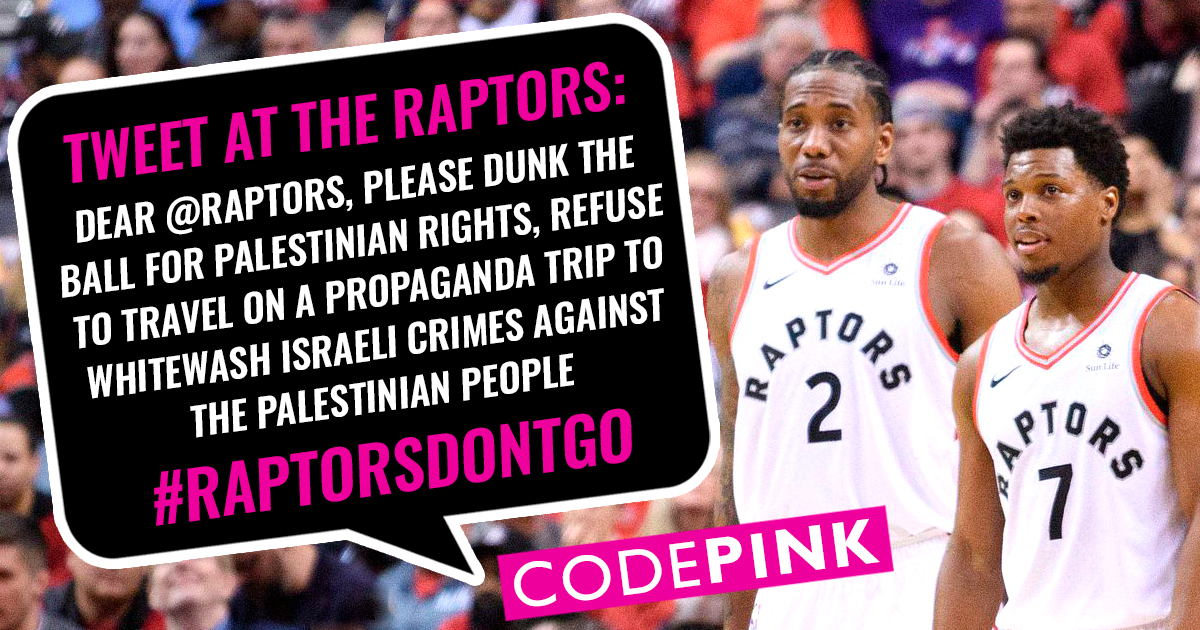 Prior to winning the 2019 NBA title, Raptor's billionaire co-owner Larry Tanenbaum told the team if they won he would take them on a trip to Israel. Traveling to Israel on such a trip would help cover up (sports-wash) Israel's crimes against the Palestinian people. Sign our letter to the Raptors’ players asking them to heed the Palestinian call for boycott — including a sports and cultural boycott — and reject the trip.

As sports fans and human rights supporters, we appeal to you to decline to travel to Israel as part of a propaganda trip that would serve to cover up (sports-wash) the daily nightmares of siege, occupation, and apartheid that Palestinians live under.

Since 1967, Israel has been holding Palestinians in the West Bank and Gaza under military occupation and in a system of apartheid. Palestinians are subject to a web of checkpoints, they endure home demolitions, land confiscations, closed military zones, and a separate and unequal system of military laws and courts. Palestinians are subjected to inadequate access to water and other resources, separate roads and walkways, and a separation wall that snakes throughout the West Bank, preventing Palestinians from accessing their crops. Under military law it is illegal for Palestinians to participate in protest of their circumstances and military courts have an over 99% conviction rate. Children as young as 12 are detained, abuses, and tried in the only juvenile military court in the world.

In Gaza, Palestinians live under a crippling siege, often referred to as the largest open-air prison on earth. 97% of the water in Gaza is unfit for consumption. Medical supplies and sufficient food cannot get in. Unemployment is 52% (70% for youth) and the densely populated strip is often bombed. The United Nations says that since March 2018, Israel has likely been committing war crimes by shooting Palestinian citizens, children, journalists, medics, and the disabled.

Inside Israel, Palestinian citizens face discrimination in housing, resources, and more. In 2005 Palestinian civil society put out a call for boycott — including academic, cultural and sports — and divestment from Israel until such a time as Israel ends its occupation and colonization of the West Bank and its siege of Gaza, dismantles the Apartheid system of racial discrimination and segregation for Palestinian citizens of Israel, and recognizes the Right of Return of over 5 million Palestinian refugees in accordance with UN resolution 194.

Around the world, poor and oppressed people embrace basketball as a sport of the people, and basketball players — many of whom come from poor and struggling backgrounds — have an important history of taking progressive positions and giving back to their communities, including NBA players showing up on the side of social and racial justice. Rather than participating in a propaganda trip that will help Israel continue its policies of racism and oppression, we encourage you to travel to the West Bank and meet with Palestinians living under occupation. CODEPINK is happy to provide you with contacts and resources to do this.

As NBA Champions, you have the opportunity to use your success and influence to help end Isreal’s abuses of Palestinian human rights. Please support the Palestinian struggle for freedom and liberation by not traveling to Israel as part of a propaganda trip.