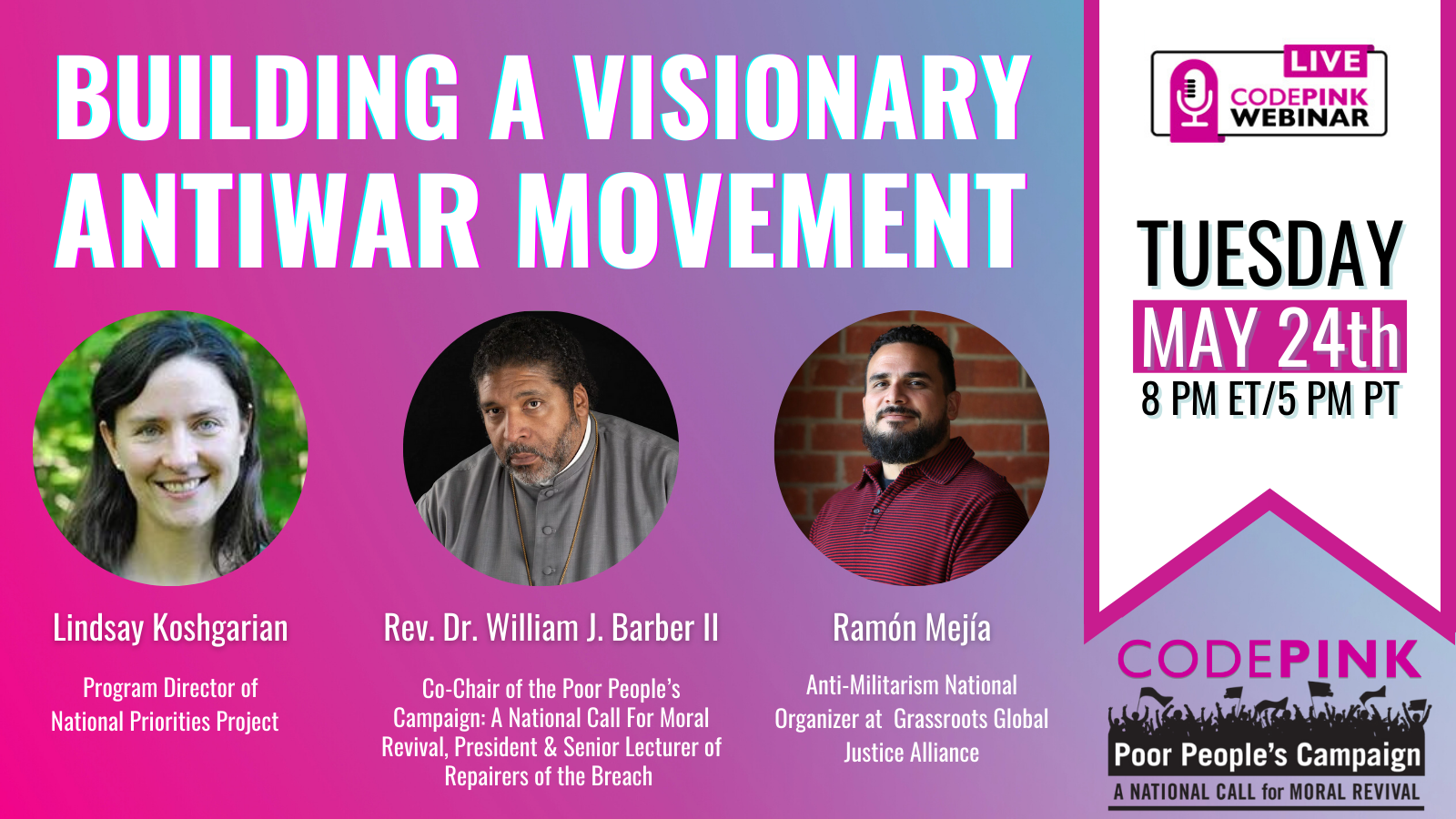 In the face of systemic racism, systemic poverty, ecological devastation, the war economy, and the distorted moral narrative of religious nationalism — we must engage in mass nonviolent moral direct action. Why does the U.S. government have money for war but not for the poor? We must declare that we won’t be silent anymore about the war on the poor by ensuring that the pentagon’s bloated budget is cut and redirected to our needs!

Join CODEPINK with three esteemed organizers, scholars, and movement leaders as we discuss what it will take to build the visionary antiwar movement that our world desperately needs right now. As we get ready to take to the streets in Washington, DC with the Poor People's Campaign on June 18th, come learn and get energized with us.

Rev. Dr. William J. Barber II is the President & Senior Lecturer of Repairers of the Breach, Co-Chair of the Poor People’s Campaign: A National Call For Moral Revival; Bishop with The Fellowship of Affirming Ministries; Visiting Professor at Union Theological Seminary; Pastor of Greenleaf Christian Church (Disciples of Christ) in Goldsboro, North Carolina, and the author of four books: We Are Called To Be A Movement; Revive Us Again: Vision and Action in Moral Organizing; The Third Reconstruction: Moral Mondays, Fusion Politics, and The Rise of a New Justice Movement; and Forward Together: A Moral Message For The Nation. Rev. Dr. Barber is also the architect of the Moral Movement, which began with weekly Moral Monday protests at the North Carolina General Assembly in 2013 and recently relaunched again online in August 2020 under the banner of the Poor People’s Campaign.

Ramón Mejía is from Dallas, Texas. At the age of 18, to support his family, he enlisted in the Marine Corps and in 2003 participated in the initial invasion of Iraq. This experience led to self-reflection, converting to Islam, and becoming an outspoken advocate and organizer against U.S. wars and the growing militarization of our communities. Over the last 10 years, as a member of About Face: Veterans Against the War, Ramón’s had the opportunity to join international delegations: to build with, deepen his commitment, and learn alongside communities in Palestine, Philippines, Chile, and Cuba. In 2016, Ramón was recognized as part of the ‘MPower 100—Muslim Social Justice Leaders Building Power Across the United States.’ Ramón earned his Bachelor of Arts in History & Religious Studies from The University of Texas at Austin. Ramón served on GGJ’s Coordinating Committee before coming on as National Organizer.

Lindsay Koshgarian is the Program Director of the National Priorities Project, where she analyzes the Pentagon budget and outsized military spending's impact on the defunding of education, health care and more. Her recent article, "Our Skyrocketing Military Spending Helps Pentagon Contractors—Not Ukraine" points out that less than one percent of the current $782 billion Pentagon budget is marked for Ukraine, and about 50 times as much will go to for profit weapons contractors.