Pissed About Corporate Pride? Wait Until You Hear What Israel’s Doing 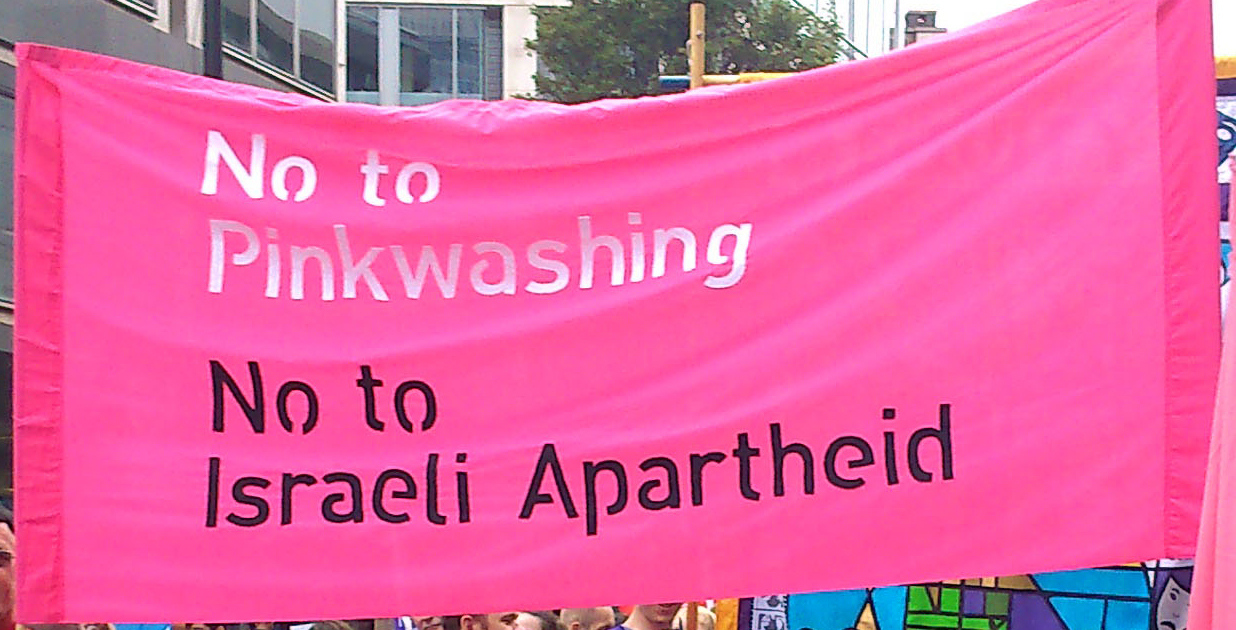 Large swaths of the American queer community were up in arms this year, fighting against the rainbow-laden corporations that walked in Pride parades around the country while also giving hundreds of thousands of dollars to anti-LBGT politicians. Understandably, many of us queer people don’t like lip-service from companies that only want to tap into the cultural capital that comes with being queer-friendly, especially if they are also privately supporting politicians pushing to legalize discrimination against queer people. Infuriating. My blood is boiling just writing about it.

This phenomenon of public support and private sabotage is something queer, anti-war organizers like myself deal with regularly from war hawks. Politicians cite Iranian anti-LGBT laws to claim the horrific US economic sanctions are a necessary act of solidarity with LGBT Iranians, despite the reality that these sanctions embolden Iranian hardliners, making the political climate more hostile toward queer Iranians. At the same time, the Trump administration is actively trying to make it legal for employers to fire LBGT employees in the US.

It’s not a coincidence that violent homophobia is only acknowledged as such when it is wielded by brown, majority-Muslim communities, and when it can justify policies that will promote American imperialism (which also impacts the health and safety of those same queer communities they claim to be acting in defense of). In the case of our government, paying lip service to queer liberation is not to gain profits; it’s to hide white supremacy behind faux progressive values and claim that racism against brown folks is in defense of queer folks. Nevermind that queer people of color not only exist, but are forced to fight for their human rights on two fronts.

One of the most toxic forms of this “pinkwashing”—using acceptance of queer folks to provide cover for racist violence—is practised by our greatest ally in the region, Israel.  The Israeli government has a history of leveraging queer acceptance to provide cover for their occupation of Palestine. When in August the Palestinian Authority banned the West Bank activities of the Palestinian group alQaws, a group dedicated to sexual and gender diversity in Palestinian society, it was another excuse for Israeli media outlets to condemn the PA’s homophobia. As a result, Israeli politicians and pro-Israel factions in the US have been using it as a talking point to frame the occupation of the West Bank and the siege of Gaza (pushing Gaza into being uninhabitable by 2020) as a part of protecting queer folks, and more broadly Western values.

Israel has a long history of using the PA’s homophobia to rewrite the occupation as a defensive move, through a marketing strategy that appeals to racist and colonial notions framing Palestinians and Muslims as inherently backwards while white, Western Israel is presented as inherently enlightened. This purposefully ignores the long history of homophobia in white, Judeo-Christian communities and the existence of the queer Palestinian community. Queer Palestinian organizations call for resistance to homophobia and the occupation, not as contradictory social movements, but as an ideologically consistent framework to liberate all Palestinians. Israel can’t claim to stand for the liberation of queer Palestinians while excluding them due to their race.

Beyond being a bad model for queer liberation, Israeli pinkwashing is a distraction from the fact that Israel’s government has not given queer Israelis equal treatment. Having a pride parade for gay Israeli Jews uses queerness as a visible spectacle to distract from their racist policies, all while homophobic policies still affect queer Israelis. Gay conversion therapy is legal in Israel (and recently espoused by the current education minister) by both licensed and non-licensed therapists. LGBT couples are excluded from marriage proceedings in Israel and the state-sponsored surrogacy programs that straight Israelis enjoy.

Perhaps most horrifically, Israeli intelligence is weaponized against queer Palestinians to blackmail them into becoming informants, threatening to out them to their communities if they refuse. Israel’s relationship to queerness is not a genuine call for the protection of queer communities; it is a tool to be wielded against Palestinians, not just including but targeting queer Palestinians.

The point of my analysis is not to claim that the PA is absolved from its suppression of queer Palestinians because Israel is also homophobic, nor am I attempting to draw any comparison between Israel’s homophobia and the PA’s homophobia. It’s to acknowledge that LGBT communities, particularly white ones, are used by racist governments to force those who act in solidarity of oppressed communities to choose between standing up to white supremacy and standing for queer liberation. Do not let them fool you: activists do not have to choose between resisting homophobia and standing in solidarity with Palestinians.