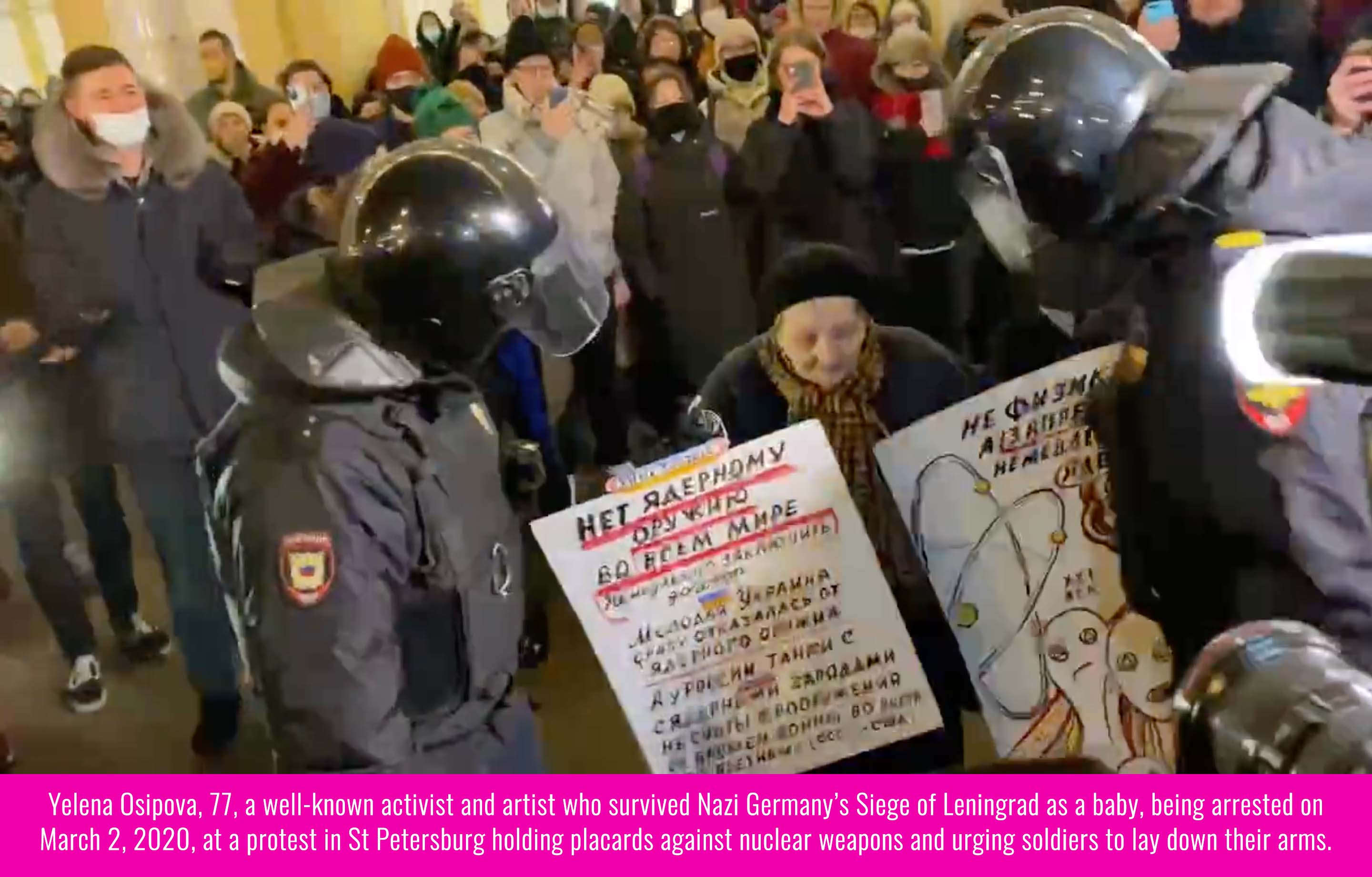 Add your name to the open letter from women, and other feminists (including men), in solidarity with Russian anti-war protestors.

We, women and other feminists (including men) of the world, express our solidarity with you as you protest the devastating invasion of Ukraine, and we join your call for Russian troops to immediately leave Ukraine. We are aware of the risks you face from police and civil authorities and thank you for your profound bravery and sacrifice. We are also moved by the tremendous courage of the Ukrainian people in the face of disaster, and our hearts ache as we bear witness to Ukrainian families huddling in bomb shelters and parking garages, or facing long lines at the border after being forced to flee their homes.

We have experience standing up to our own governments’ aggression. During the U.S./NATO invasion and occupation of Iraq and Afghanistan, we took to the streets by the hundreds of thousands to oppose the horrific destruction of entire cities and the death of hundreds of thousands of innocent people. Now, as Russian missiles mercilessly wipe out your neighbors’ homes, medical facilities, and schools in Ukraine, we see you take to the streets of Moscow, St. Petersburg, and other Russian cities in peaceful protest, and we are so deeply inspired and grateful.

As we oppose this brutal war being waged in your name, we are also aware of the role the U.S. and NATO have played in stoking the geopolitical crisis that led to this war. We have opposed NATO’s expansion into Central and Eastern Europe, and we continue to oppose NATO expansion today. We steadfastly believe Ukraine should be a neutral country.

Today, as Putin has put your nuclear arsenal on high alert, we see the terrifying possibility of this conflict spinning out of control. The U.S. and Russia are guilty of stockpiling 90% of the world’s nuclear weapons, putting the entire world at risk, and violating the Nuclear Nonproliferation Treaty. As we organize today to stop this war, we must work together in the future to force our governments to join the UN Treaty on the Prohibition of Nuclear Weapons so we can rid the world of this existential threat to survival on our beautiful planet.

The imposition of sanctions aimed to damage the Russian economy also concerns us. We have no problem with taking yachts and private jets from oligarchs, but sanctions that hurt millions of ordinary Russians like you and impact the entire global economy are cruel and counterproductive. We have seen the devastating results of sanctions in countries from Cuba to Iran to North Korea–such sanctions harm the civilian population, particularly women, children, and the elderly, and fail to change government policies.

Instead of indiscriminate sanctions and fanning the flames by pouring more weapons into Ukraine, we demand that Russia and Ukraine engage in serious negotiations, with all the compromises this would entail.

As women and other feminists, we have had enough of senseless wars that destroy lives and communities while lining the coffers of weapons manufacturers. We’ve seen too many attacks on civilians from Yemen to Gaza to Ethiopia to Ukraine, and we’ve watched in horror as precious resources are poured into wars while families' basic needs for food, shelter, education, and healthcare go unmet and climate change threatens all life on our planet. A world of violence, hatred, and destruction is not the world we want for our children. With fire in our bellies and love in our hearts, we join with you — across borders — to demand an end to the bloodshed and the destruction.