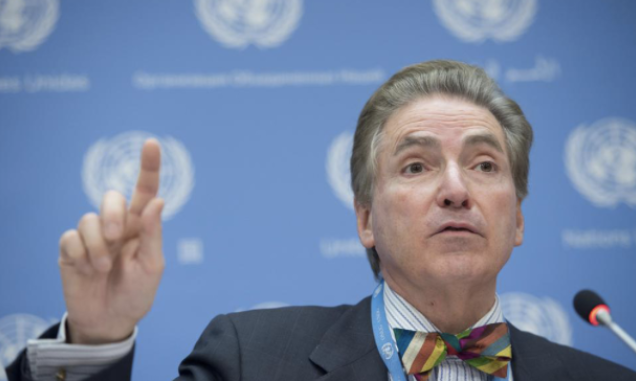 As former UN Independent Expert on the Promotion of a Democratic and Equitable International Order (2012-2018), I would like to urge you to once again make your voices heard and make concrete proposals for mediation and peace in the context of the Venezuelan crisis.

The most noble task of the United Nations is to create the conditions conducive to local, regional and international peace, to work preventively and tirelessly to avoid armed conflicts, to mediate and negotiate to reach peaceful solutions, so that all human beings can live in human dignity and in the enjoyment of the human right to peace and all other civil, cultural, economic, political and social rights.  I am particularly worried by the Orwellian corruption of language, the instrumentalization and weaponization of human rights and now even of humanitarian assistance.

I look back at my UN mission to Venezuela in November/December 2017 as a modest contribution to facilitate the cooperation between the United Nations and the Venezuelan government and to open the door to the visits of other rapporteurs.  See my report to the UN Human Rights Council and the relevant recommendations.

I believe that it would be timely and necessary for both of you to issue a statement reaffirming General Assembly Resolutions 2625 and 3314 and the 23 Principles of International Order that I formulated in my 2018 report to the Human Rights Council.  See para 14.

It would be appropriate to recognize the fact that the government of Venezuela has put into effect some of the recommendations contained in my report -- and in the six-page confidential memo that I personally gave to Foreign Minister Jorge Arreaza upon my departure.

Indeed, first the Venezuelan government released 80 detainees -- including Roberto Picón and 23 others whose release I had specifically requested -- that was on 23 December 2017, followed by other releases in the course of 2018.  Alas, there has been practically no information about this in the mainstream media, although it is easily accessible on the internet.  See also the comments of Venezuela on my report, in particular, paragraph 46:

(xvi) As a result of this on 23 December 2017, 80 people arrested for acts of violence during the protests in the country were released; and on 1 June 2018, 39 more people were released.

(xviii) In this regard, the Venezuelan Government values the willingness and disposition of the Independent Expert, who was pleased to inform the competent authorities of the requests he received from some relatives of the persons deprived of their liberty. His recommendations were accepted.

Shortly after my visit Venezuelan authorities met with the UN agencies and made additional cooperation accords, thanks to the valuable efforts Peter Grohmann, the UNDP representative in Caracas.

Now the government of Venezuela has formally asked the United Nations for humanitarian assistance in connection with the current crisis.  We must not let them down.

I think that the US should turn over all the humanitarian assistance and medical supplies it has flown into Colombia and have them distributed as soon as possible with the help of the United Nations and other neutral organizations, including the International Committee of the Red Cross.

Another item of information that is sorely missing from the mainstream media is the delivery last week of 933 tons of food and medicines at port La Guaira -- coming from China, Cuba, India, Turkey etc.

Moreover an additional 300 tons of medicines and medical supplies provided by Russia arrived by air.

Venezuela has always welcomed and repeatedly asked for assistance from neutral and friendly governments so as to overcome the adverse human rights impacts of the financial blockade and the sanctions. Such help should be offered in good faith, without strings attached.

I believe that this is the moment for Michelle Bachelet to accept the invitation of the government of Venezuela, extended to her in December 2018, to visit Venezuela personally.  Her presence in Venezuela should ban the growing danger of a military intervention by foreign entities. She should endorse the efforts at mediation launched by Mexico and Uruguay at the Montevideo mechanism.

There are ominous parallels with the run-up to the Iraq invasion in 2003 -- an illegal war, as Kofi Annan said on repeated occasions.

It is obvious to any first-year law student that the constant threats against Venezuela are contrary to article 2(4) of the UN 'Charter.  What many do not realize is that the threats, the economic war, the financial blockade and the sanctions violate the principles contained in Article 3 of the OAS Charter:

Moreover, they violate numerous articles of Chapter 4 of the OAS Charter, Article 17:

Each State has the right to develop its cultural, political, and economic life freely and naturally. In this free development, the State shall respect the rights of the individual and the principles of universal morality.

Respect for and the faithful observance of treaties constitute standards for the development of peaceful relations among States. International treaties and agreements should be public.

No State or group of States has the right to intervene, directly or indirectly, for any reason whatever, in the internal or external affairs of any other State. The foregoing principle prohibits not only armed force but also any other form of interference or attempted threat against the personality of the State or against its political, economic, and cultural elements.

No State may use or encourage the use of coercive measures of an economic or political character in order to force the sovereign will of another State and obtain from it advantages of any kind.”

I remain respectfully yours