Spreading the Message of No U.S. Military Bases in the World 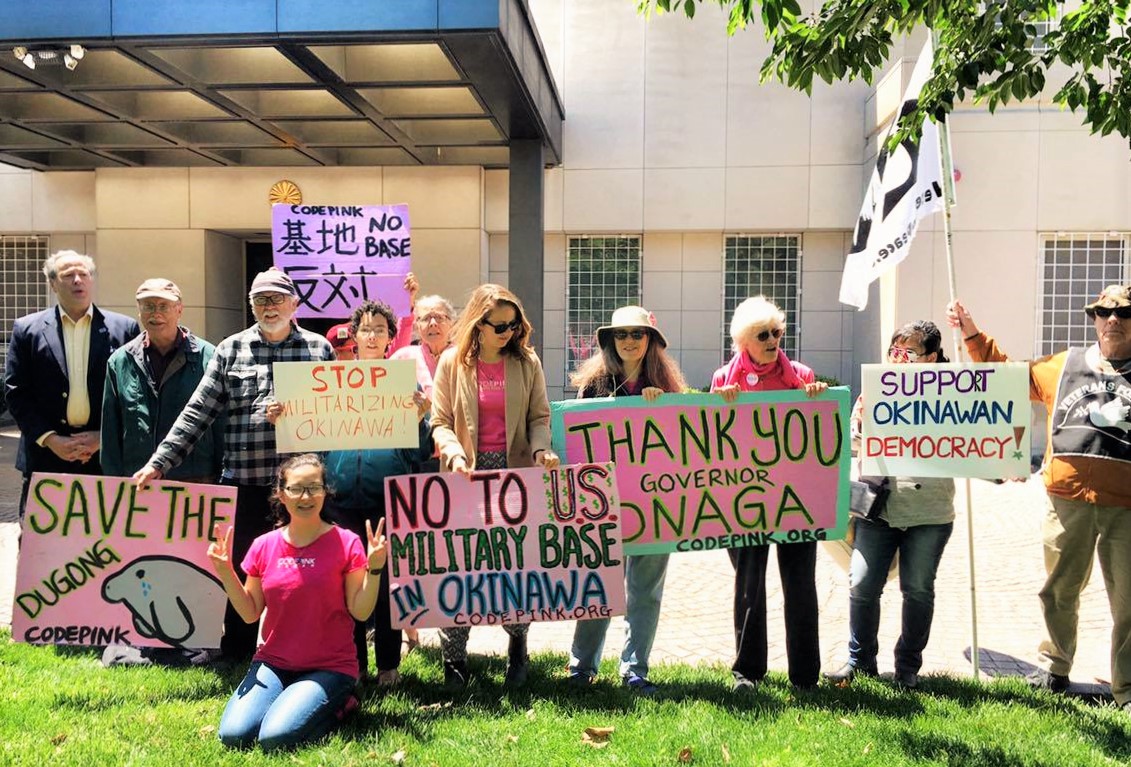 Spreading the Message of No US Military Bases in the World

My name is Ann Wright and I served 29 years in the US Army/Army Reserves and retired as a Colonel.  I was also a US diplomat and served in US Embassies in Nicaragua, Grenada, Somalia, Uzbekistan, Kyrgyzstan, Sierra Leone, Micronesia, Afghanistan and Mongolia. However, in March 2003 I resigned from the US government in opposition to President Bush's war on Iraq.

Today at the 7th Okinawa Op-Ed Advertisement Symposium, "No need for new base for preparation for war!", I have been asked to speak about how we can build upon citizens networking, solidarity and joint action beyond national borders in order to remove the US military bases from Okinawa.

Apologies for Continued Sexual Violence Against Women by US Military

But, first, as a 29-year veteran of the U.S. Army, I want to deeply apologize for the horrific criminal actions by US military personnel assigned in Okinawa in the past two months. The perpetrators of the rape and murder of Rina Shimabukuro and the rape of another woman and injuries caused by drunken driving by yet another U.S. military person are inexcusable.

I was in Okinawa for the past 4 days. Suzuyo Takazato of Okinawan Women Act Against Military Violence, an organization that has been documenting the violence of US military in Okinawa since World War II --now 28 pages long-- took us to pay our respects to the memory of 20 year old Rina Shimabukuro. We travelled to the area near Camp Hansen where her body was located by the admission of the perpetrator of her rape, assault and murder, a US military contractor and a former US Marine assigned in Okinawa. By his own admission to the Japanese police, he said that he had driven for several hours looking for a victim.

Not only are communities around US military bases affected by this violence as we have seen erupt in the past two months in Okinawa, but violence occurs on military bases between members of the military community and families. Domestic violence within military families that are living on and off military bases is high.

Sexual assault and rape of military personnel by other military personnel is extraordinarily high.  Estimates are that one in three women in the US military will be sexually assaulted or raped during the short time of six years that she is in the US military.  The Department of Defense estimates that over 20,000 military are sexually assaulted each year, women and men. Rates of prosecution for these crimes are very low, with only 7 percent of the cases reported resulting in prosecution of the perpetrator.

Yet President Obama did not express regrets for the continued U.S. occupation of 20 percent of the land of Okinawa 70 years after World War II, nor for the environmental destruction of lands used by US military as evidenced by the recent release of 8500 pages of reports of pollution, chemical spills and environmental damage on US military bases most of which was never reported to the Japanese government.

The very unbalanced, unequal Status of Forces Agreement (SOFA) allows the U.S. military to pollute Okinawan lands and not be required to report the pollution to local authorities nor be required to clean up the damage.  The SOFA does not require the US military to report criminal acts committed on U.S. military bases thereby hiding the numbers of violent acts perpetrated there.

Now is the perfect time for the government of Japan to demand to have the SOFA renegotiated to force the US government to accept its responsibilities for damages done by the U.S. military to its people and its lands.

The citizens of Okinawa and the elected leaders of Okinawa have accomplished an unprecedented event: the suspension, and hopefully, the end of construction of the runways at Henoko. What you have done to challenge both your national government and the US government's attempt to build another military base in the beautiful waters of Ora Bay is remarkable!

I have just visited activists on Jeju Island, South Korea where their 8-year campaign to prevent the construction of a naval base in their pristine waters was not successful. Their efforts were NOT supported by the prefecture government and now 116 of them and 5 village organizations are being sued for damages from costs incurred by the slow down of contraction by daily protests that closed the entrance gates to construction trucks.

Now to suggestions on how to build a greater international coalition to support your efforts to close the U.S. military bases on Okinawa, bases that take 20 percent of the lands of Okinawa and comprise a majority of all military bases in the entire country of Japan.

In virtually every country where there are US bases we find citizens who are challenging those bases. They are your allies in the struggle in Okinawa.

I have worked with a variety of international coalitions on a variety of issues.  I think you would find these coalitions very sympathetic with your struggle in Okinawa and would want to do what they can to assist. This assistance may be in the form of publicizing No Bases in Okinawa through their international newsletters and e-blasts to sending delegations to join in solidarity.

Some of these international coalitions anti-war, stop US military bases, stop assassin drones, include:

Stop Wars Coaltion in the UK

Cuban Movement for Peace and Sovereignty of the Peoples (MovPaz)

Veterans for Peace--2015 delegations to Okinawa and Jeju Island

CODEPINK: Women for Peace--with an new dynamic intern with Okinawan heritage and with a chapter in Japan, two members visited Okinawa with me

Global Network Against Weapons and Nuclear Power in Space

These are just a few of the more active organizations that work on an international bases and that I believe would be honored to receive an invitation to send a delegation to Okinawa.

Again, I want to express my deepest apologies for the actions of a few individuals in the US military for the criminal acts that have occurred, but more importantly tell you that many of us in the United States will continue our struggle to end the 800 U.S. military bases the US has around the world.