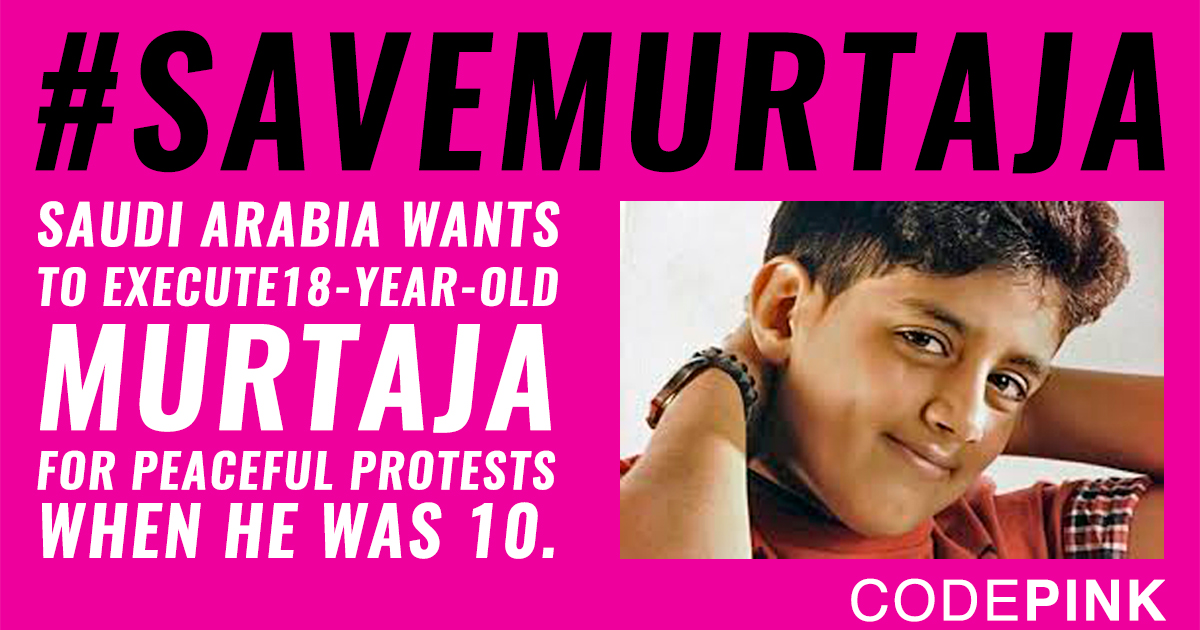 Saudi teenager Murtaja Qureiris is facing execution for charges that he participated in anti-government protests between the ages of 10 and 13. Murtaja was arrested at the age of 13 when he and his family were traveling to Bahrain. Tortured into a false confession, he has been in prison ever since his arrest and now faces execution.

Already in April of this year, Saudi Arabia carried out a mass execution, by beheading, of 37 people, 33 of them Shia minority like Murtaja. The UN and human rights groups have been condemning Saudi executions, including the plan to kill Murtaja by crucifixion or dismemberment after execution. But the U.S relationship with Saudi Arabia provides a shield of impunity for the country to continue to use executions — including of children — to crush dissent.

Executing a young man for participation in protests when he was 10-years-old crosses a line. Add your name to our petition calling on Secretary of State Mike Pompeo to tell Saudi Arabia they much not take the life of Murtaja Qureiris and instead must release him immediately.

We are gravely concerned about the life of Saudi teenager Murtaja Qureiris, facing execution in Saudi Arabia for participating in anti-government protests when he was between the age of 10 and 13.

Since the arrest of Murtaja as a 13-year-old, he has had his basic rights taken away, placed in solitary confinement, denied access to a lawyer, and tortured into making a confession.

Saudi Arabia is a state party to the Convention on the Rights of the Child, which strictly prohibits the use of the death penalty for crimes committed by anyone below the age of 18.

Already this year, Saudi Arabia has carried out a mass execution of 37 people, 33 of them Shia minority like Murtaja Qureiris.

I urge you to immediately call for a halt of the execution of Murtaja Qureiris call for his release, and establish an official moratorium on all executions of people who are charged with crimes allegedly committed as a child.