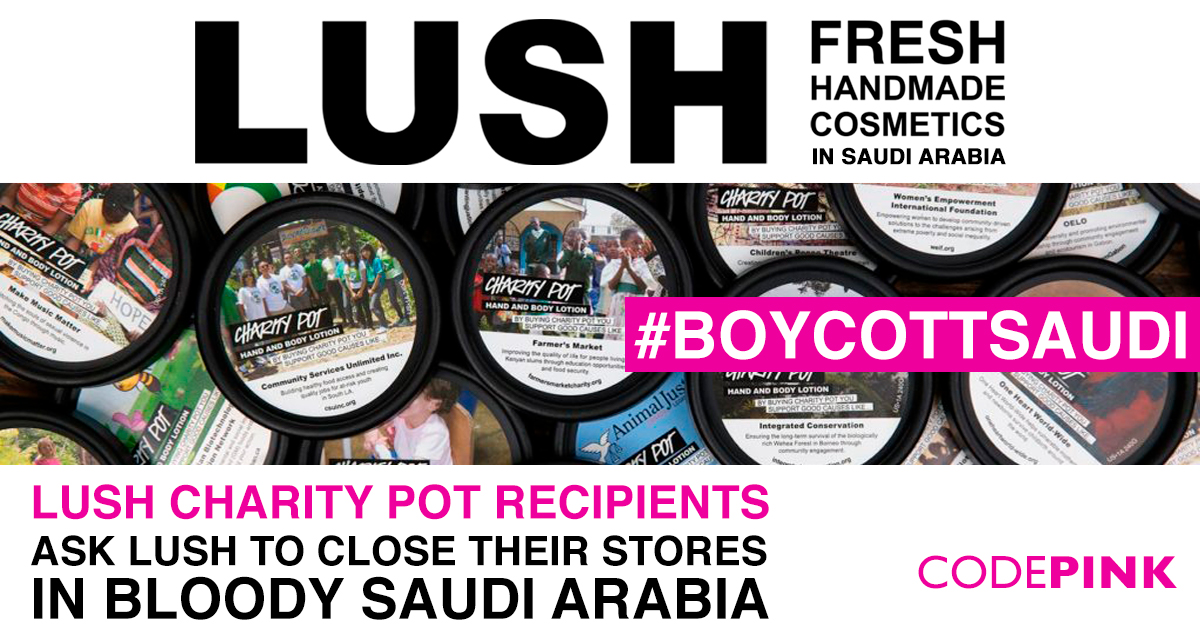 As grateful recipient organizations, or associates of recipients, of your Charity Pot Donations we greatly appreciate your company’s great work to promote social justice and environmental issues, we write to you about our concern regarding your two stores in Saudi Arabia.

Lush is unique among businesses for your courageous stands on such issues as calling for the abolition of nuclear weapons, opposing Donald Trump’s ban on entry to the US of people from seven Muslim countries, and environmentally destructive oil production from Canada’s Tar Sands. We also applaud your support for Palestinian rights, going so far as to make a principled decision not to have  stores in Israel due to concerns that in order to have a “mixed” workforce in the country, some of the “[Lush]  team would have to come through checkpoints and be treated differently on their way to work.”

We feel that having stores in Saudi Arabia is inconsistent with the values your company is based on. Saudi Arabia is problematic from a variety of perspectives, including its treatment of women, suppression of dissent, and its war on Yemen.

Regarding women, Saudi Arabia subjects women to the oppressive male guardianship system, in which all Saudi women need permission from a male to travel, study, obtain a passport, and marry. Saudi women activists are right now languishing in prison, subjected to horrific beatings, electroshock, and sexual harassment as punishment for their activism.

Saudi Arabia is the main party responsible for the worst humanitarian crisis on earth--in Yemen. Since 2015, the Saudi regime has been dropping bombs on Yemeni school children, hospitals, marketplaces, residences—even on weddings and funerals. Every ten minutes in Yemen, a child dies from malnutrition and disease as a result of this horrible war.

In 2018, Saudi journalist Jamal Khashoggi was brutally murdered. Both the CIA and the UN have linked the murder to Crown Prince Mohammad bin Salman and other high-ranking Saudi officials, but so far, there has been no accountability for this horrific murder.

Due to the oppressive nature of the Saudi regime, campaigns to boycott Saudi Arabia have been gaining momentum. In just two years, there have been a number of successes. PR groups that have represented the government have dropped them as clients. Prestigious think tanks, such as the Brookings Institution and the Middle East Institute, have announced that they will no longer accept Saudi funding. Singer Nicki Minaj received praise from human rights groups worldwide when, on July 2019, she canceled her performance in Saudi Arabia, citing concerns about the treatment of women, the LGBTQ community and freedom of expression. And perhaps most importantly, all over Europe, the United States and Canada, coalitions of peace, human rights and humanitarian groups have been pushing--often successfully--for legislation to stop the sale of weapons to the Saudi regime.

As a business with well-deserved public recognition and as a socially responsible company, we hope you will reconsider your connection to Saudi Arabia. Whatever benefit those stores might have for the people you employ, it would send a much more powerful message to the Saudi government and those suffering from Saudi abuses — including women, LGBT communities, journalists, dissidents, the Shia minority, and the people of Yemen — if you refused to do business there.

We thank you for all that you do for the world and we look forward to engaging with you further on this critical issue.

Send a message to Lush asking them to close their stores in Saudi Arabia!