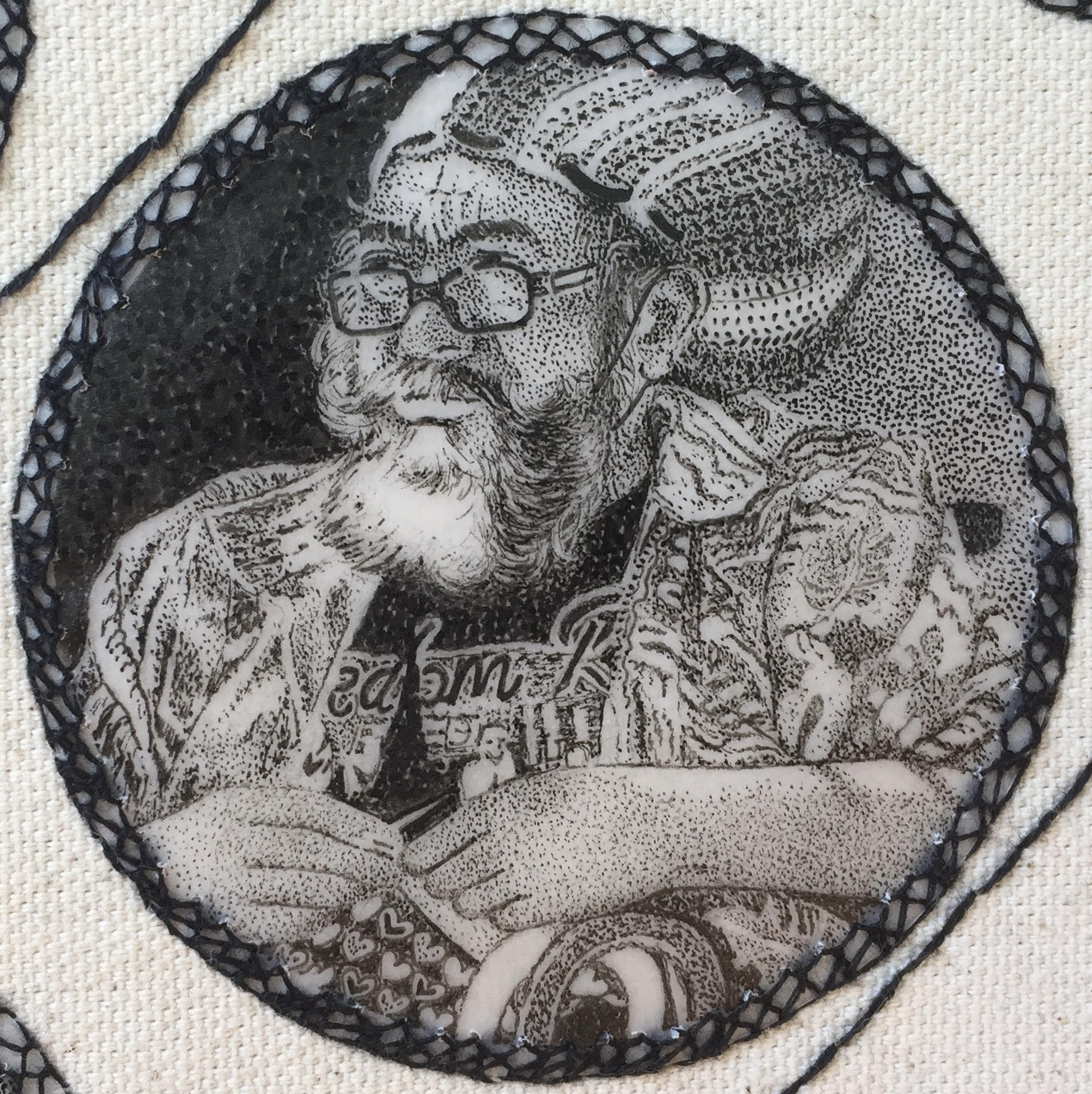 No, because the face of a little girl in Bangladesh, or a little boy in Cambodia, and the thought of a nuclear blast going off close enough to them for them to lose their life, is enough. Again, this is a love letter. This is a love letter to all the civilians of the planet. — Philipos Melaku-Bello, in response to a question from Jacob Morgan of Slate Plus about whether he had ever thought about ending his now-41-year-old anti–nuclear vigil outside the White House gates.

In conjunction with Stan Cox’s “In Real Time” monthly dispatches with City Lights Books, I am working on an artwork titled “It’s Time,” starting with a central image and adding drawings that expand the work outward, in concentric ovals, tracking the pivotal events of the next two years, month by month. As part of “It’s Time,” I am also including images that portray people and events that have been either deliberately or lazily almost lost to the popular historical imagination but are still very much part of and connected to the existential kismet of the inhabitants of this heating Earth.

These portraits of human persistence are not actually lost, of course; rather, they serve as connecting threads to the present state of things. Both Tariq Ali and Gore Vidal wrote about this hole-in-history phenomenon and gave it their own labels: respectively, “The Extreme Center” and “The United States of Amnesia.”

These threads, frayed and forgotten as they are, must be acknowledged for their timeless place in history, and repaired. Because if we fail to do that, we can’t move forward in creating a fairer, more just world. Reparations and justice are part of the same tapestry. Justice for the past goes hand in hand with justice for the present and future.

The first five portraits that I’ve placed in this dark center of the “It’s Time” series are those of John Brown, Leonard Peltier, Philipos Melaku-Bello, Mumia Abu-Jamal, and Julian Assange. 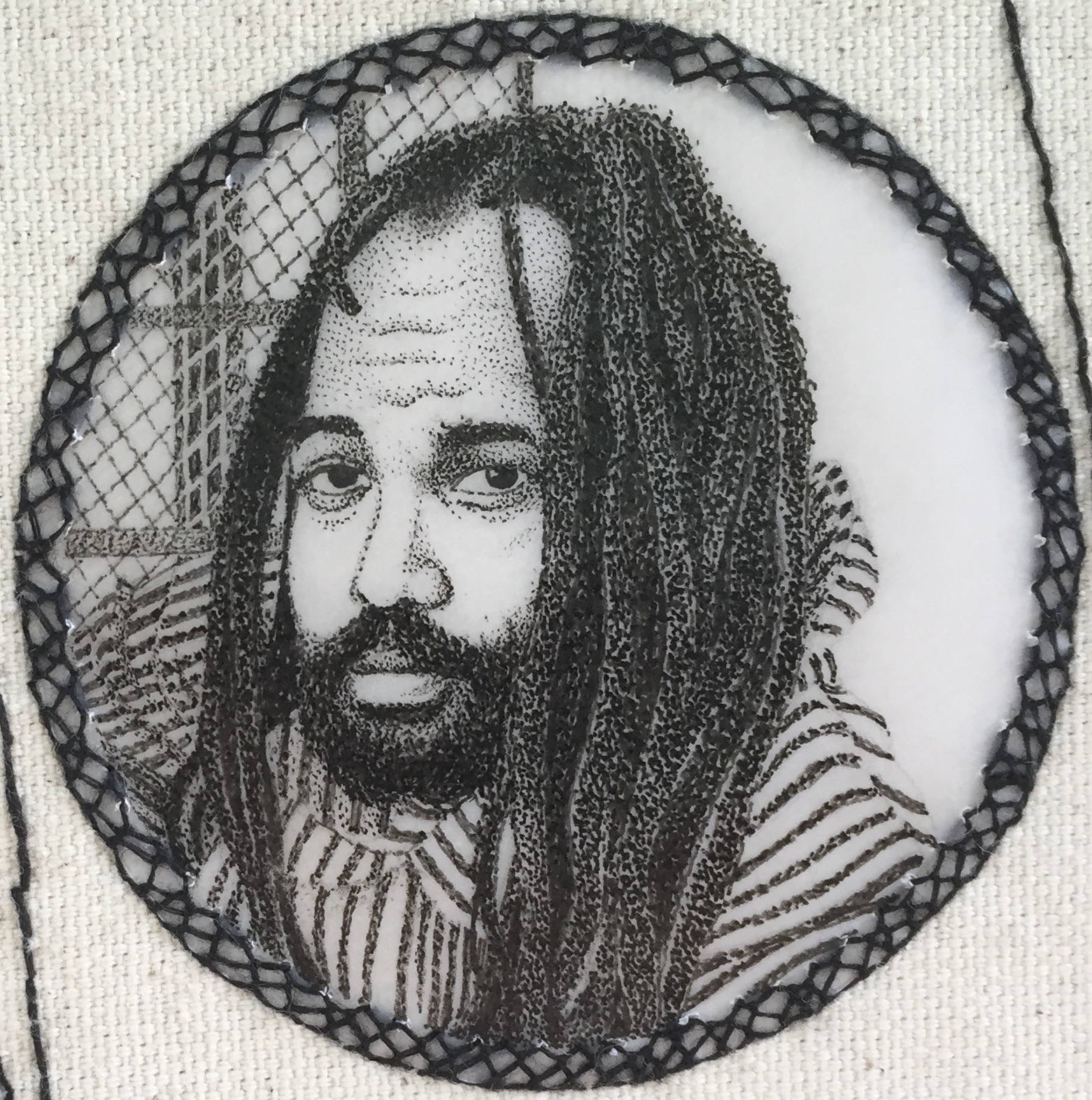 If you notice, all of these five men, aside from having been thorns in the side of a state machinery that would rather they disappear from the annals of a dark, white-elitist history, happen to also have long gorgeous hair and/or beards. As if now there’s physically more of these five men for the state to disappear. In this age of unrestrained, ecologically destructive growth, the one kind of growth I can wholeheartedly support is this nonviolent, defiant growth on the face and scalp!

Stan and I live in the heart of the conterminous United States. And as we all know, this heart was beating fast and hard on August 2nd when Kansans flocked to the polls and voted no on an amendment that would have stripped women of their right to an abortion. All eyes and ears of the country and the world were on Kansas that evening as the results were coming in, and we demonstrated via the ballot box that women’s rights are human rights.

But this wasn’t the first time that Kansas voted “No” on a moral issue of great consequence. On August 2, 1858, 164 years to the day before the abortion referendum, Kansans voted down a ballot initiative that would have legalized slavery in our then-territory. Which brings us to the first of these portraits, that of John Brown, who carried out his militant abolitionist action in Kansas in the three years leading up to the slavery vote, the era of “Bleeding Kansas.” Brown said “No!” to slavery and was hanged for it in December, 1859, a year before his vision was partially achieved and Kansas was finally admitted to the Union as a free state. 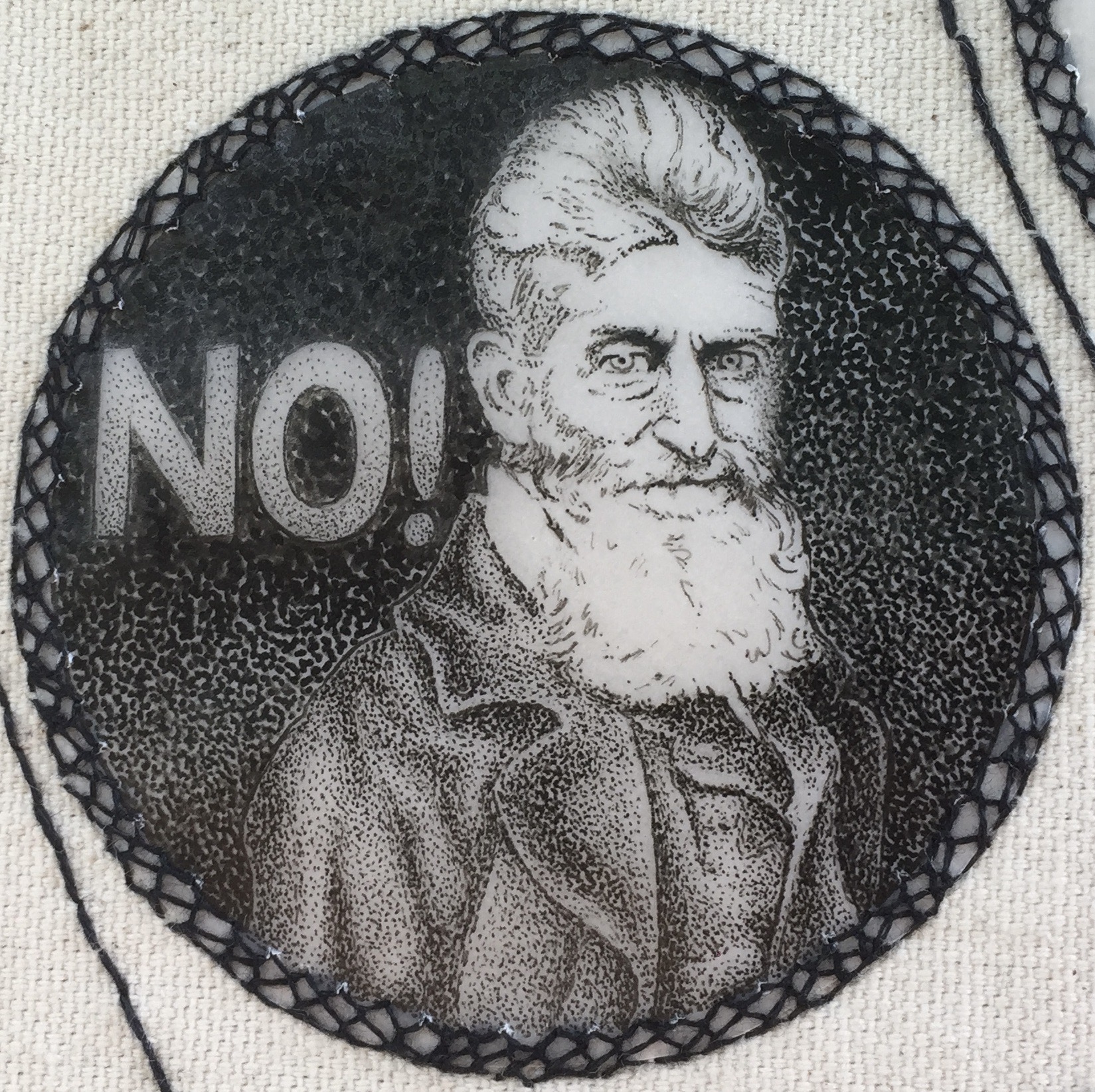 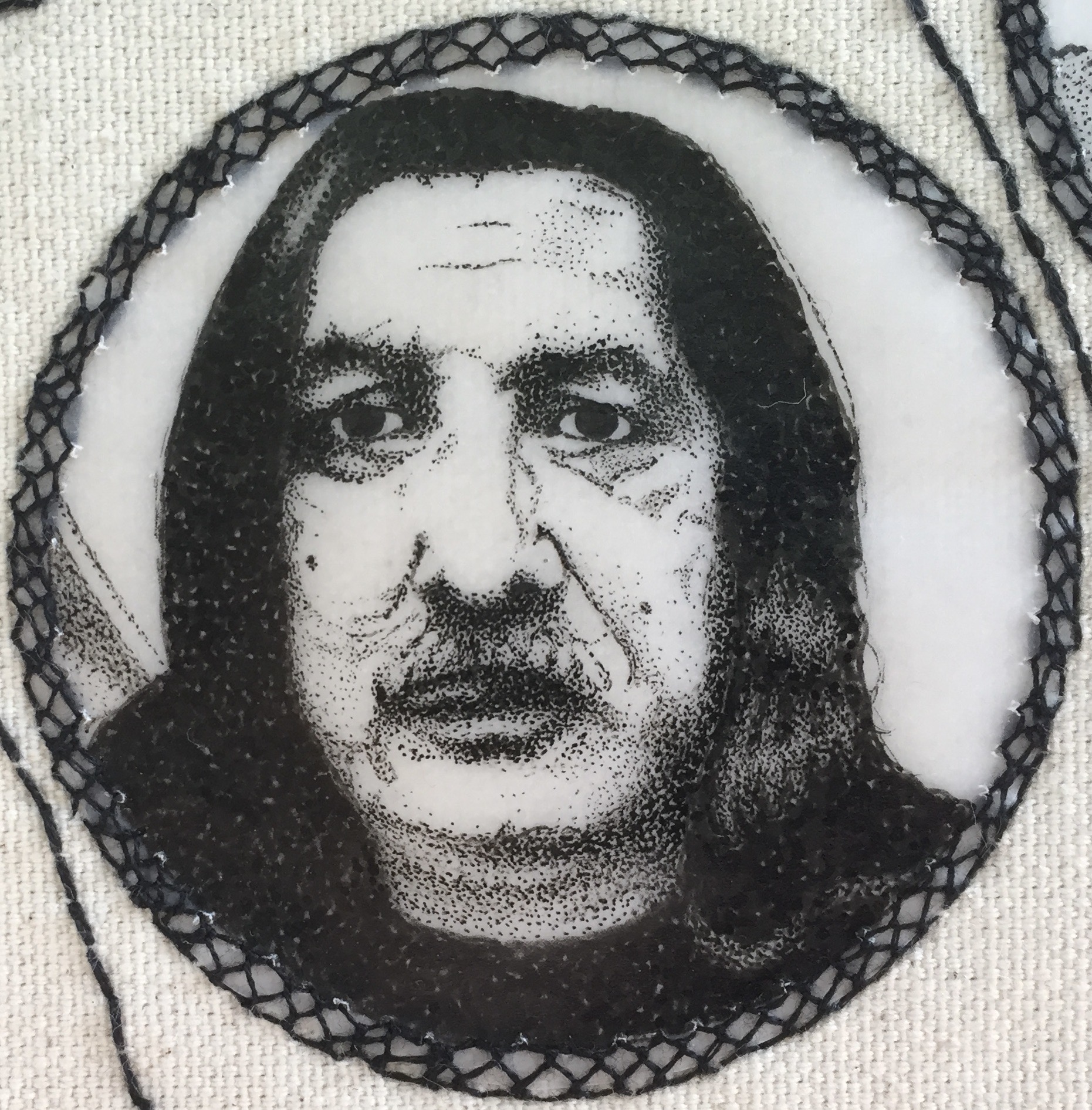 We all know of Leonard Peltier, America’s longest-held Indigenous political prisoner, who was wrongly convicted of the deaths of two FBI agents in June 1975 on the Pine Ridge Indian Reservation in South Dakota. Peltier, a member of the American Indian Movement, was there that day protecting his people against the white supremacists of the time and was handed two consecutive life sentences for it. Many witnesses whose testimony was used to convict him later admitted that FBI agents had coerced them into lying. In 2000, then-President Bill Clinton considered granting clemency to Peltier, but he was hounded by hundreds of FBI agents marching pathetically around the White House, so that put a stop to that.

It is quite possible that Philipos Melaku-Bello was present at the north side of the White House that December day as the agents marched. But how many of us have heard of him? I certainly did not know of him until this past Juneteenth weekend when Stan and I went to DC to join the Poor People’s and Low-Wage Workers’ Assembly and Moral March on Washington and to the Polls. After the march, we saw Mr. Melaku-Bello and what he calls his “makeshift tent” outside the White House fence. He sat in a wheelchair wearing a Rasta cap and Freedom Bus Riders t-shirt, surrounded by human-rights and earth-rights photos, posters, and mementos going back decades. He had a needle and thread and was darning a black pouch adorned with pink and white hearts.

Just beside him was a poster on which the number ‘40’ had the ‘0’ whited out and replaced with a ‘1’, thereby announcing, “41 YEARS 24/7 ANTI-NUCLEAR PEACE VIGIL. Surviving thru: Rain or Shine; thru Hurricanes; Sleet; Hail; Blizzards; Tornados; H1N1; Coronavirus; 3 BLM Closures. Holders of the 24-Hour Permit for the Black Lives Memorial Fence.”

Philipos told us that he’s been sitting there since 1984, manning the William Thomas Memorial Peace Vigil, which was established in 1981. He has volunteers that help him maintain the vigil day and night. But the Feds are waiting, he emphasized in an interview with Slate Plus. “They’re waiting for it to be abandoned by way of snowfall, blizzard, hurricane…That’s the way it can be taken away, by abandonment.”

To me that 4-by-4 foot area that Philipos legally occupies holds within it everything that the moneyed elite of the post-industrial world have had a hand in perpetuating, to the point of no return. Everywhere I looked in that small square I saw messages and images seeking justice for the earth, the “civilians of the planet,” for Peltier, for Indigenous, and Black and Brown people, for Palestinians, for the poor, for the countless victims of war and displacement, and yes, for Mumia Abu-Jamal and Julian Assange. They were there too.

"We know that Mumia will be free. We just want to delay Mumia’s release as long as possible." — Maureen Faulkner, wife of Daniel Faulkner speaking at the Fraternal Order of Police Lodge 5.

Mumia’s fight for justice has been going on since 1981, the year Philipos’ anti-nuclear peace vigil was established. He has been appealing for a new trial in the shooting of Philadelphia Police officer Daniel Faulkner since then. Just a couple of days ago I got a newsletter from Mumia supporters at Prison Radio, which read that “the current delays are a tactic designed to prevent justice and delay accountability… Fighting to keep Mumia in prison is all about limiting exposure. It is all about preserving the fiction that decades of mass incarceration prosecuted by former Philadelphia police chief and mayor Frank Rizzo and former governor of Pennsylvania Ed Rendell are not tainted by police and prosecutorial misconduct. The goal is to prevent the white hot spotlight on Philadelphia’s long sordid racist history.” Having had double bypass surgery in 2021, Mumia has a life-expectancy of 5 years. He will be back in court on October 19.

The United States uses the whole earth as a petri dish for its bottomless extractive and exploitative pursuits and leaves people like Brown, Peltier, Melaku-Bello, Abu-Jamal and Julian Assange, respectively, with a noose; 45 years behind bars and counting; a 4x4 not-to-be-abandoned liberated space; 41 years behind bars and counting; and a possible jail term of 175 years for exposing U.S. war crimes to the world. 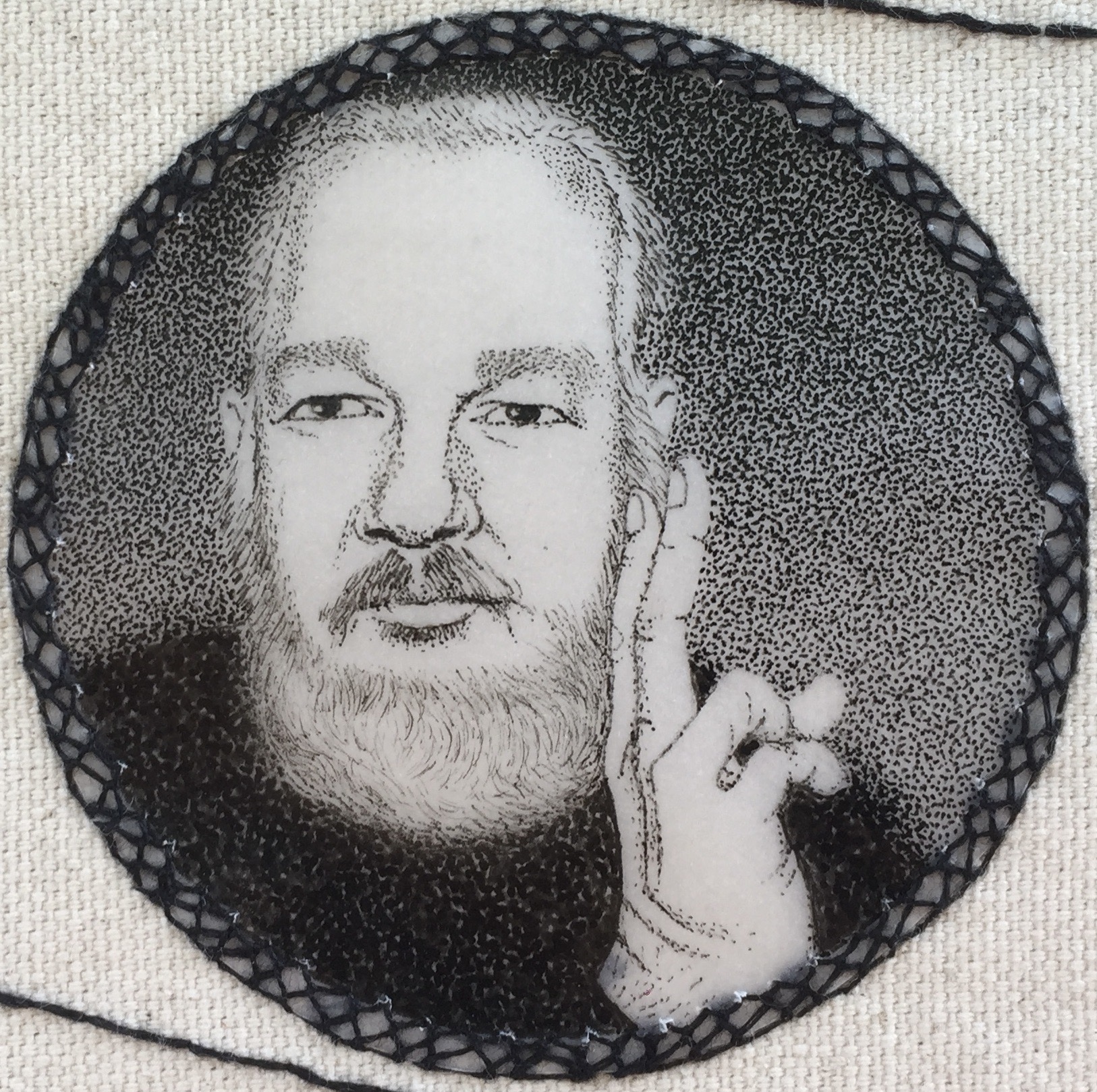 “What they couldn’t tolerate was when Julian Assange was sent video footage which showed an Apache helicopter in Baghdad killing civilians. Ordinary people. That is the principal reason, the exposure of war crimes that caused outrage especially in the intelligence agencies of the United States. — Tariq Ali, AlJazeera, August 15.

Was it any coincidence that Assange was clutching a book titled 'Gore Vidal: History of the National Security State’ in his hand as he was being physically dragged out of the Ecuadorian embassy in London and into a police van in April, 2019? He was trying to send a message. Is it a coincidence that Melaku-Bello was sitting there like a cuddly Rasta Buddha repairing an old pouch? Maybe it was a subconscious message telling us that we need to repair the present and the past for a fairer, more just future.