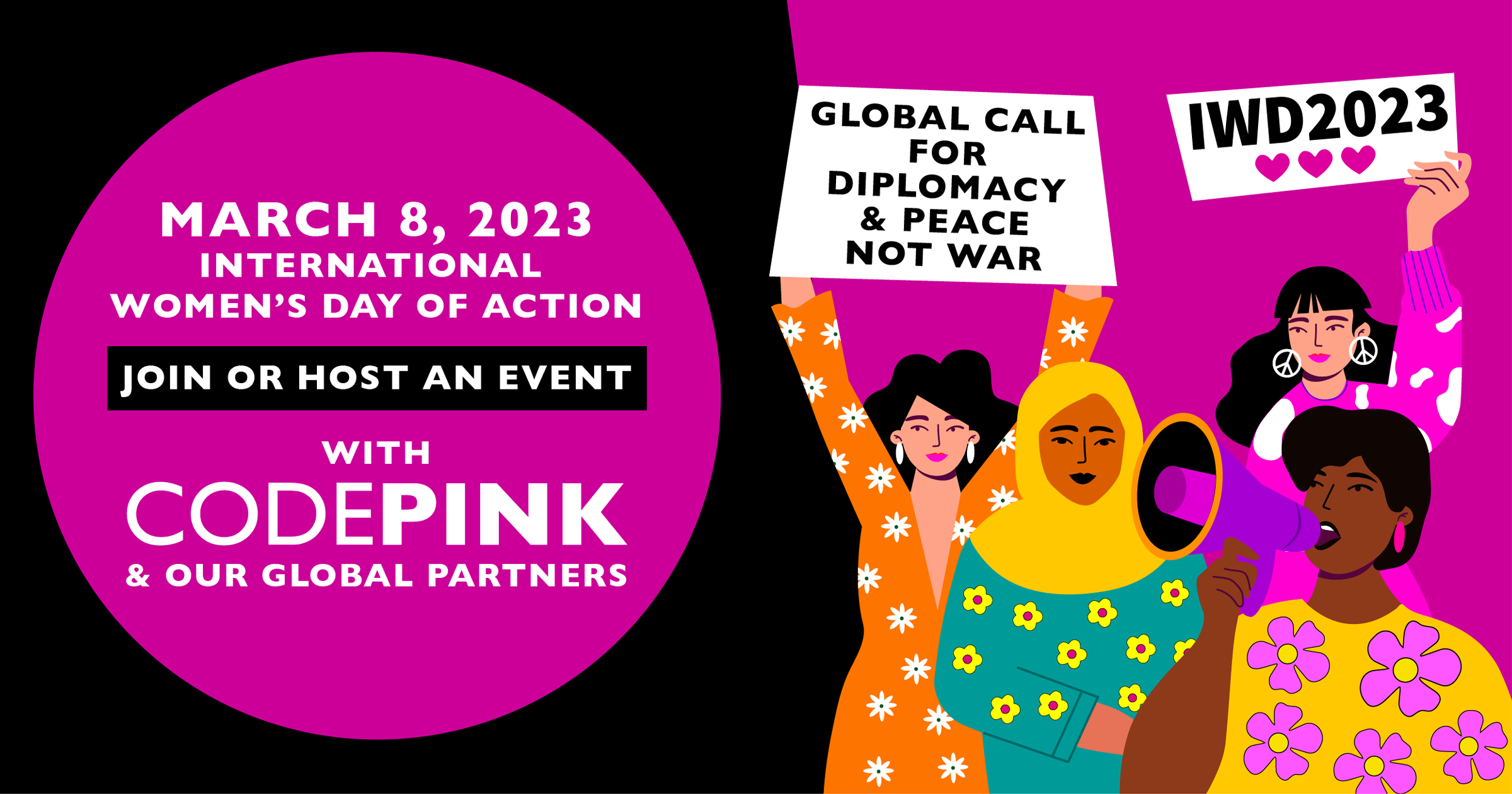 This International Women's Day, March 8, 2023, in the midst of the Ukraine war and as the US continues to beat the drums of war towards China, we are rising with activists around the world in a call for Diplomacy and an end to war. Join us in disrupting the status quo that accepts and supports war and weapons instead of peace and cooperation.  Raise up the costs of war.  Raise up the needs of the planet and people. It is time for all of us to stand up and demand the measures be taken that lead to peace not war, lead to cooperation not separation, that lead the needs of life not destruction and extraction.

JOIN AS A GLOBAL PARTNER 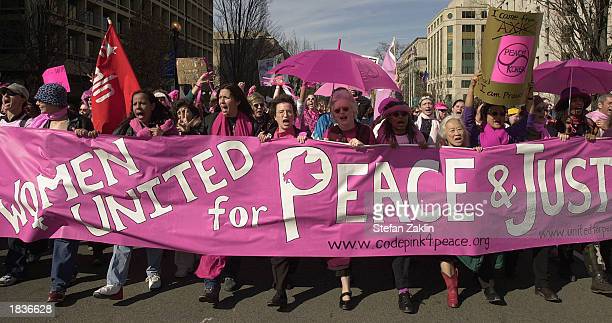 As powerfully penned by Starhawk, the day CODEPINK began, “We cannot morally consent to war while paths of peace and negotiation have not been pursued to their fullest. We who cherish children will not consent to their murder. We love our country, but we will never wrap ourselves in red, white and blue. Instead, we announce a CODEPINK alert: signifying extreme danger to all the values of nurturing, caring, and compassion that women and loving men have held…We call on all outraged women to join us in taking a stand, now. And we call upon our brothers to join with us and support us. These actions will be initiated by women, but not limited to women. Stand in the streets and marketplaces of your towns with banners and signs of dissent, and talk to your neighbors. Stand before your elected representatives: and if they will not listen, sit in their offices, refusing to leave until they do. Withdraw consent from the warmongers. Engage in outrageous acts of dissent. We encourage all actions, from public education and free speech to nonviolent civil disobedience that can disrupt the progress toward war.”

20 years ago on IWD 2003 10,000 women marched from MLK Jr. Park to the White House to find it encircled and blocked by police; Alice Walker was able to affect an officer who opened a space for the women to enter the lockdown. Walker stated "The best substitute for war is intelligence, and we have it . . . and we have good hearts…We have to believe we have good hearts, that we don't have to murder to change minds." That was the day of her first arrest along with all the women who followed. Fellow protestors, such a nuclear disarmament activist Helen Caldicott, “carried a barrage of signs reading, “Diplomacy, not bombs” and “War is extremely costly, but peace is priceless,” while many chanted things like “Women, united, will never be defeated.”  20 years later after 20 years of a war on Terror and $21 Trillion of taxpayer dollars stolen to pay for it while killing over 1.5 million people. It is beyond time to stand in the face of this extraction, destruction and oppression and say no more.

We will mobilize for days of striking, reclaiming public space, abstaining from feminized labor, boycotting, calling out misogynistic politicians and companies, listening to activists’ stories, creating feminist art, and striking in educational institutions.

Events Around the World:

To get started on creating your OWN IWD 2023 event, please select your continent and click the "host your own event" feature to begin!

Host your own Australia Events

Host your own Asia Events

Host your own Middle East Events

Host your own Africa Events

Host your own Europe Events

Host your own Latin America Events

Host your own North America Events