Is the US staging a coup attempt in Bolivia? 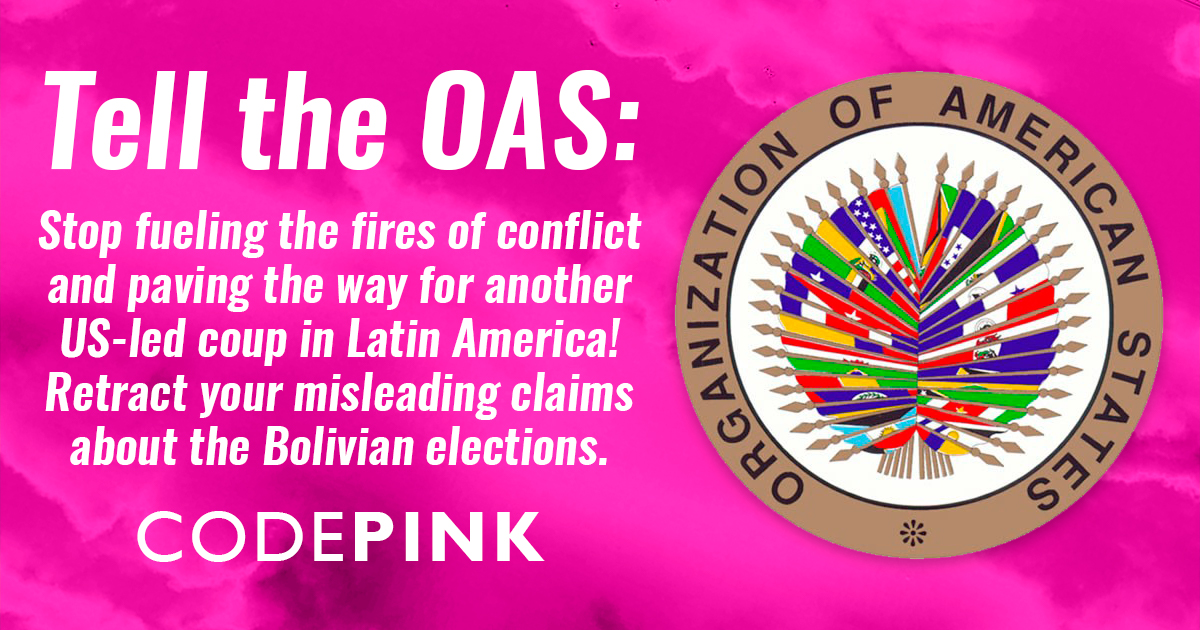 On Wednesday of this week, right-wing militants began marching in the streets of Bolivia. While some American news outlets were quick to lump these far-right demonstrations in with the string of protests against austerity and income inequality sweeping the world, we at CODEPINK know better. This is the beginning of yet another attempt by US forces to overthrow a duly elected Latin American leader.

President Evo Morales, who appears to have secured victory in his recent reelection campaign, has been the head of a progressive, anti-imperialist government in Bolivia: the kind of government the United States has historically looked to undermine. It’s unsurprising, then, that the Organization of American States* (OAS), which sits across the street from the White House and has long been considered an arm of the US neoliberal foreign policy machine, released a statement accusing President Morales of electoral interference. Sign our petition to tell the OAS to retract its dangerous and incorrect statement!

The OAS’s initial analysis of the voting data in Bolivia excluded much of Morales’ rural base and showed him winning by a slimmer margin than the later, more in-depth analysis which did include his base. The OAS claims that because the margin was wider in the more in-depth analysis, Morales must have tampered with the results. However, CODEPINK Radio took a deep-dive into this issue on Thursday and it is clear to us that this type of change is common in Bolivian elections.

The OAS acted without caution and spoke without context in its statement and the result has already been dangerous. The sentiment expressed by the OAS (and no other election-monitoring group) has been repeated by warmongers like Senator Marco Rubio here in the US and by the far-right militants marching right now in Bolivia. The OAS stance has fueled the fires of unnecessary conflict and paved the way for what looks to President Morales and CODEPINK like the beginnings of another US-led coup in Latin America. Sign our petition and urge the Secretary General OAS to retract its dangerous and misleading claims!

In solidarity with the People of Bolivia,
Leonardo, Medea, Michelle, Raegan, and Teri

P.S. You can listen to this week’s episode of CODEPINK Radio, where our Latin America team discussed Bolivia, Chile and more on Apple Podcasts now!

*The Organization of American States was created in 1948 at a US-led summit to increase regional security, commercial cooperation, and serve as a bulwark against the spread of communism in the region.