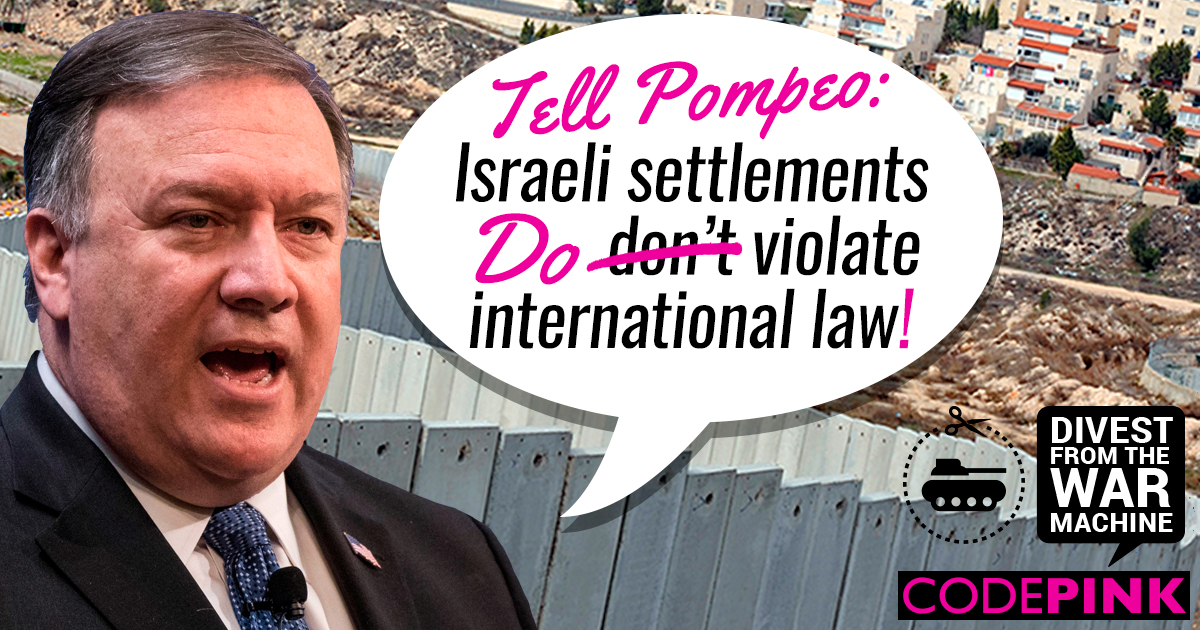 On Monday, November 18, 2019, US Secretary of State Mike Pompeo reversed 40 years of US policy and crossed international law by falsely stating that Israeli settlements do not violate international law.

Add your name to letter condemning Pompeo’s statement. We will deliver the letter and signatures to the U.S. State Department.

Let’s be clear: all Israeli settlements in the Occupied Palestinian Territories are illegal.

We the undersigned condemn your action today reversing 40 years of US policy, crossing international law, isolating the U.S. By stating, wrongly, that Israeli settlements on occupied Palestinian land do not violate international law, you are putting lives at risk and undermining efforts to achieve peace.

Your statement that the legality of individual settlements should be decided by the Israeli courts and claim that your declaration on behalf of the US administration would not prejudice an ultimate comprehensive agreement between Israelis and Palestinians is both untrue and dangerous. From moving the U.S. embassy to Jerusalem to falsely recognizing the occupied Golan Heights as part of Israel, this new State Department legal policy comes as part of a series of Trump administration moves that slash Palestinian rights and liberation, take a sledgehammer to hopes for peace in the region, and endanger lives — both Palestinian and Israeli. While this isn’t surprising, given the United States’ increasingly-close relationship to Israel, it is more than worthy of condemnation and we are demanding that you reverse it.

Your statement today repudiates a 1978 State Department legal opinion that held that civilian settlements in the occupied territories are “inconsistent with international law.” The U.S. must stop harming Palestinians through such statements and policies and insist that Israel immediately halt all construction of settlements and related infrastructure. This would be a first step towards removing illegal Israeli settlers from the Occupied Palestinian Territories This is what the U.S. administration should be doing instead of shielding Israel in its continuous violations the International Law, specifically the Fourth Geneva Convention.

The international community constantly condemned and considered the establishment of Israeli settlements in the Palestinian Occupied Territories illegal under international law, violating Article 49 of the Fourth Geneva Convention of 1949 which states: "The Occupying Power shall not deport or transfer parts of its civilian population into the territory it occupies." The United Nations Security Council, the United Nations General Assembly, the International Committee of the Red Cross, the International Court of Justice, and the High Contracting Parties to the Convention have all affirmed that the Fourth Geneva Convention does apply. The United Nations Fact-Finding Mission (FFM) on Israeli Settlements found “a multitude of the human rights of the Palestinians are violated in various forms and ways due to the existence of the settlements.”

The complicity of the US is not only allowing Israel’s human rights abuses to happen but HELPING Israel carry out atrocities against the Palestinians by green-lighting its actions and shielding it from their consequences. Every time the US gives unnecessary aid to the Israeli military or sells weapons to Israel used to commit war crimes against civilian protesters in Gaza, the United States has a hand in those war crimes. Every time the US uses its veto power in the UN Security Council to protect Israel from condemnation, it tells the Israeli government that international law is optional. The United States is supporting Israel to violate International Law, International Humanitarian Law, and the Fourth Geneva Convention and it must stop.