National – On Tuesday, March 20, three powerful women—Gloria Steinem, Alice Walker and Eve Ensler—signed onto a statement drafted by CODEPINK opposing an attack on Iran.  The petition implores three powerful American female politicians—Secretary of State Hillary Clinton, Ambassador Susan Rice and First Lady Michelle Obama—to use their influence to push for diplomacy, not bombing, in our relations with Iran. (See http://j.mp/americanpetition.) 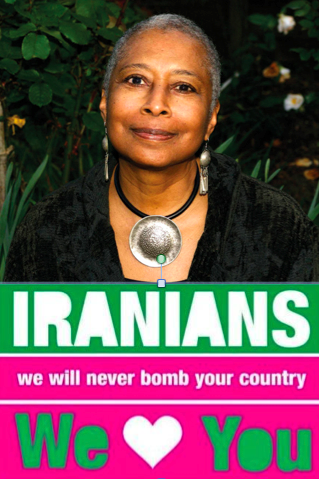 CODEPINK launched the petition online, on twitter and facebook, and in a matter of hours received thousands of signers.  The petition launch date was significant: March 20th marked the 9th anniversary of the Iraq invasion, and on a happier note, the Iranian New Year, Norooz.  This American petition was created at the request of an Israeli group, the Coalition of Women for Peace, who modeled their own petition after a call to action from a group of women inside Iran.  The Israeli, Iranian and U.S. women plan to do more actions together to oppose war.

A similar cross-border facebook phenomenon that erupted this week is the moving images from Israelis stating “Iranians We Love You. We will never bomb your country.”  Iranians responded with similar messages of love for Israelis, highlighting images of Jewish historic landmarks in Iran, and Iranians who saved Jews during the Holocaust. CODEPINK is using the same “Iranians, We Love You” theme in its campaign.

“Nine years ago, I joined CODEPINK in front of the White House in an act of civil disobedience to try to stop our government from bombing Iraq,” said Pulitzer Prize-winning author Alice Walker.  “None of us could live with ourselves if we sat by idly while a country filled with children was blown to bits using money we needed in the United States to build hospitals, housing and schools.  We must not let another tragic war begin.”

“Before the U.S. military attacked Iraq, I joined many activists, writers and artists in signing a call opposing a preemptive military invasion of Iraq,” said author and feminist activist Gloria Steinem. “We feared such a war would increase human suffering, arouse animosity toward our country, damage the economy and undermine our moral standing in the world.  Our fears turned out to be right.  Once again we are calling on people to stop another devastating war, and we’re especially calling on women—as we’ve seen from Ireland to Libya, women often have a peacemaking advantage.  Let’s hope this time our government listens.”

CODEPINK is a women-initiated grassroots peace and social justice movement working to end U.S. funded wars and occupations, to challenge militarism globally, and to redirect U.S. resources into health care, education, green jobs and other life-affirming activities.  CODEPINK’s campaign to prevent war on Iran has spanned the past six years and has included the passage of “Peace with Iran” resolutions in over 40 U.S. cities, community education events, a counter-conference and creative protests of the AIPAC Policy Conference, and most recently a full page ad in The Hill newspaper that ran on Super Tuesday, March 6, when the group organized over 150 Congressional office visits to oppose increased sanctions or an attack on Iran.