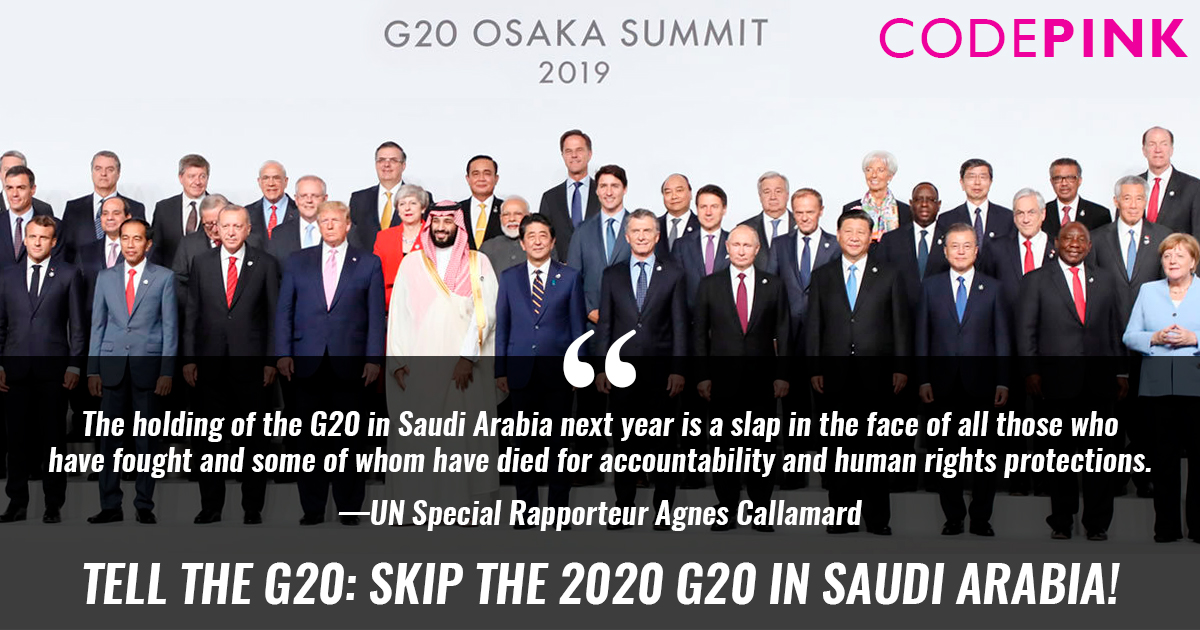 Despite its war crimes and gross violations of human rights, Saudi Arabia continues to operate on the world stage as though it was a normal nation. Next year, in 2020, that will include hosting the G20 forum.

The G20 is composed of 19 countries and the European Union. Together, they represent two-thirds of the world’s population and 80% of world trade. Started in 2008, the G20 meets annually to discuss economic issues and ways to increase cooperation. Each year the location of the forum rotates. Next year it is supposed to be in Riyadh, Saudi Arabia.

World leaders from the UK, Canada, Sweden, the UN, and democratic countries should not be treating Saudi Arabia as a normal county. They should skip the G20 meeting in 2020 in order to pressure Saudi Arabia to finally:

Add your name below to the letter calling on all G20 countries and other participating countries and international organizations to refuse complicity in Saudi Arabia’s war crimes and human rights abuses. TELL THEM TO SKIP THE 2020 G20 IN SAUDI ARABIA, or at the very least send a low-level delegation!

As citizens concerned with human rights, we call on you to refuse to attend the 2020 G20 forum in Riyadh, Saudi Arabia--or at the very least, send low-level delegations.

According to numerous experts, including the CIA, Saudi de facto ruler, Crown Prince Mohammed bin Salman (MBS), was personally responsible for the grotesque murder of Washington Post journalist Jamal Khashoggi. Agnes Callamard, the UN Special Rapporteur on extrajudicial, summary or arbitrary executions, has called for the 2020 G20 forum to be moved from Riyadh is response to Khashoggi’s murder.

Saudi Arabia is carrying out a war on Yemen so brutal — bombing school children, hospitals, marketplaces, weddings and funerals — that Yemen is now suffering the worst humanitarian crisis on earth. Since 2015 some 85,000 children under the age of five have died from acute malnutrition as a result of the war.

Saudi Arabia is the most misogynist, gender-segregated nation on earth. Even though Saudi Arabia has just granted more rights to women, Saudi women must still obtain permission from a guardian in order to marry or divorce. Women are separated from men in schools, restaurants and public buildings.

After granting women the right to drive in 2018, Saudi Arabia arrested a number of the very women who led the campaign for the right to drive. These brave women are now languishing in prison, subjected to horrific beatings, electroshock and sexual harassment.

Saudi Arabia chops off people’s heads in public executions for offenses ranging from atheism to homosexuality to sorcery. Saudi Arabia has one of the highest execution rates in the world, and the execution rate has nearly doubled under MBS’s rule. Saudi Arabia uses long prison terms and physical punishment against everyone from bloggers to lawyers who dare question the regime’s absolute power.

For all of these reasons, we ask you to boycott the 2020 G20 forum in Saudi Arabia.