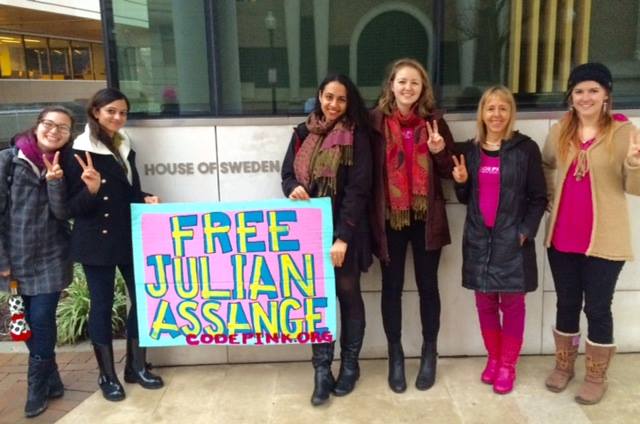 On February 24th members of the peace organization CODEPINK went to the Swedish Embassy in Washington DC to deliver thousands of petition signatures in support of Wikileaks founder and world-renowned whistleblower Julian Assange. Tall and very modern-looking, the Swedish Embassy is located in the high-end neighborhood of Georgetown, Washington DC, nestled in a plaza overlooking the Potomac River.

With us we carried in a large sign that read FREE JULIAN ASSANGE! Medea went in before us to deliver the petitions and signatures, before our presence set off a push back. She delivered them to a staff member who said she knew about Assange and his situation, but Medea told her she had visited Julian a few months ago and described his living conditions and how he was being imprisoned because of the Swedish government.  The consul agree to deliver the signatures and the message to the members of the Embassy team.  Despite Embassy security asking us not to we entered the building with the sign, they backed off quickly and allowed us to stay.  This stood in stark contrast with our experiences delivering petitions to other embassies in Washington DC, many of which have refused to even let us in the front door. Of course, those unwelcoming embassies represent repressive regimes like Israel, Saudi Arabia, Egypt and more, and we have higher expectations for governments of progressive of countries like Sweden–– one of the reasons we are optimistically appealing to them on behalf of Julian Assange.

After waiting at the reception desk, Swedish officials from the Embassy came out to meet us. They were friendly, but non-committal, and they only had a couple minutes to spare for us even though we conveyed the strong sense of urgency regarding our visit. They said they were not the “right” people to speak with, but they said they would “pass along the materials,” despite our insistence to meet with someone higher up. This was very disappointing to us, and we told them we would return. We speculated about their reluctance to meet with is, and agreed that more public pressure is needed for a better reception and response. For good measure, we left them with thousands of signatures from another petition to the US Department of Justice to highlight even more support for Assange.

With that connection established, we expect to return to the Embassy soon with more signatures on the petition, which is written out below. At CODEPINK we are deeply committed to honoring whistleblowers and the many personal sacrifices they make so that our world will be a more transparent and peaceful place. Free Julian Assange!

"We the undersigned, including legal and human rights organizations, academics, and policymakers condemn the reactions of the governments of Sweden and the United Kingdom to the finding by the United Nations Working Group on Arbitrary Detention that Julian Assange is arbitrarily detained.

The governments of Sweden and the United Kingdom are setting a dangerous precedent that undermines the United Nations Human Rights system as a whole.

We urge Sweden and the United Kingdom to respect the binding nature of the human rights covenants on which the decision is based, including the International Covenant on Civil and Political Rights; as well as the independence, integrity and authority of the Office of the High Commissioner on Human Rights and the Working Group on Arbitrary Detention.

We therefore call on the governments of Sweden and the United Kingdom to comply without further delay with the Working Group's findings and "ensure the right of free movement of Mr. Assange and accord him an enforceable right to compensation, in accordance with article 9(5) of the International Covenant on Civil and Political Rights."