No Military Escalation in Syria! 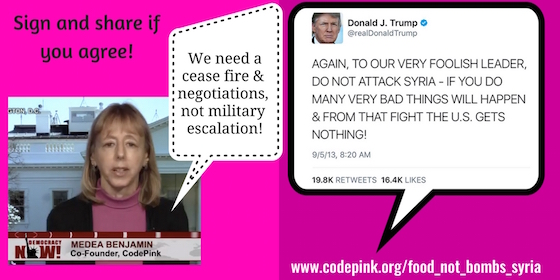 Further US intervention in the war in Syria will only exacerbate an already dreadful situation. There is no military solution to this crisis. Congress should take back its constitutional authority to decide when and if the U.S. goes to war, and should demand that the Trump administration stop its dangerous escalation.

Congress should also call on the administration to lift its ban on Syrian refugees entering the United States. It should reject Trump’s budget proposal to cut humanitarian aid and instead provide greater financial support for the humanitarian crisis affecting Syrian refugees. Congress should also instruct the administration to work with the Russians to call for a ceasefire and negotiations to find a political solution.