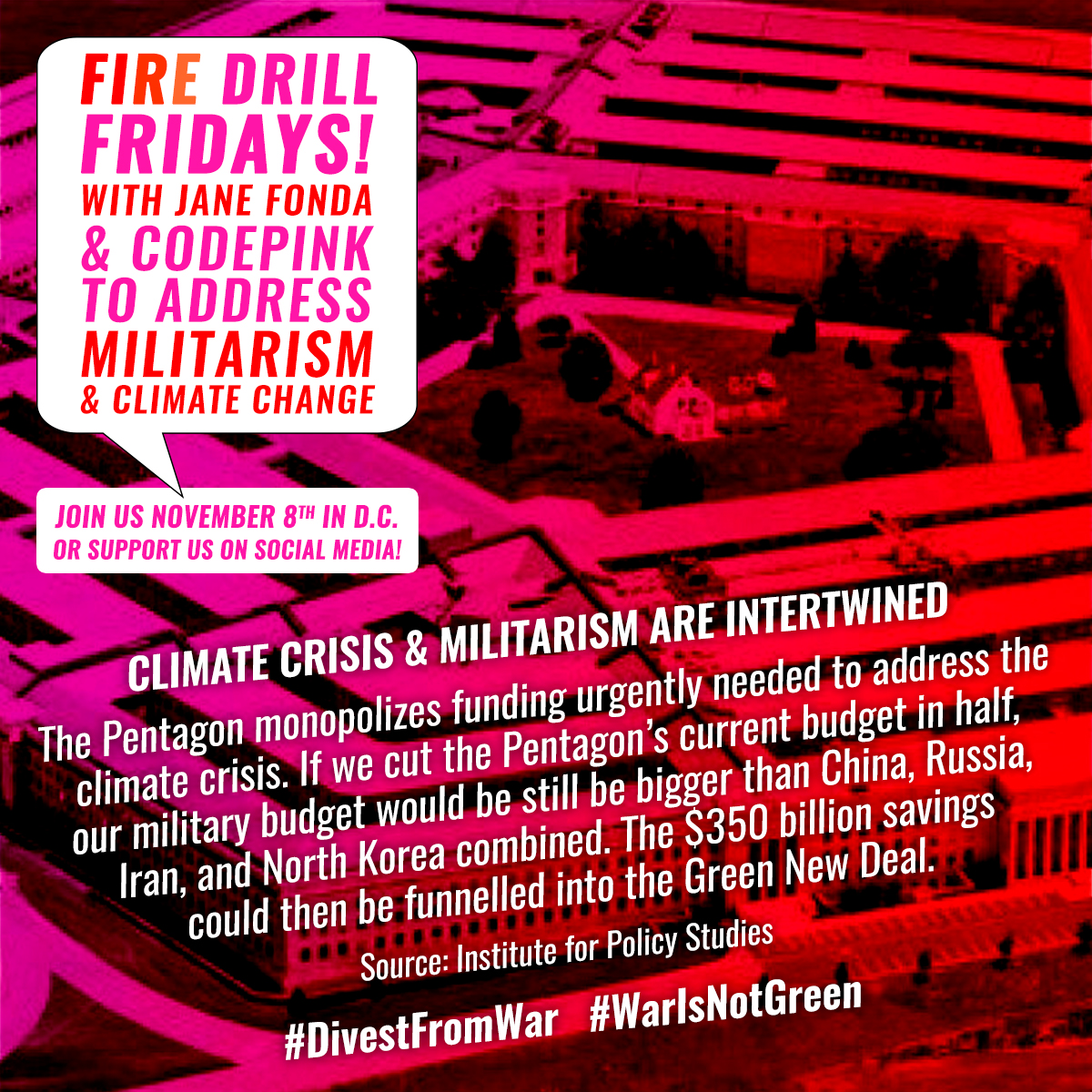 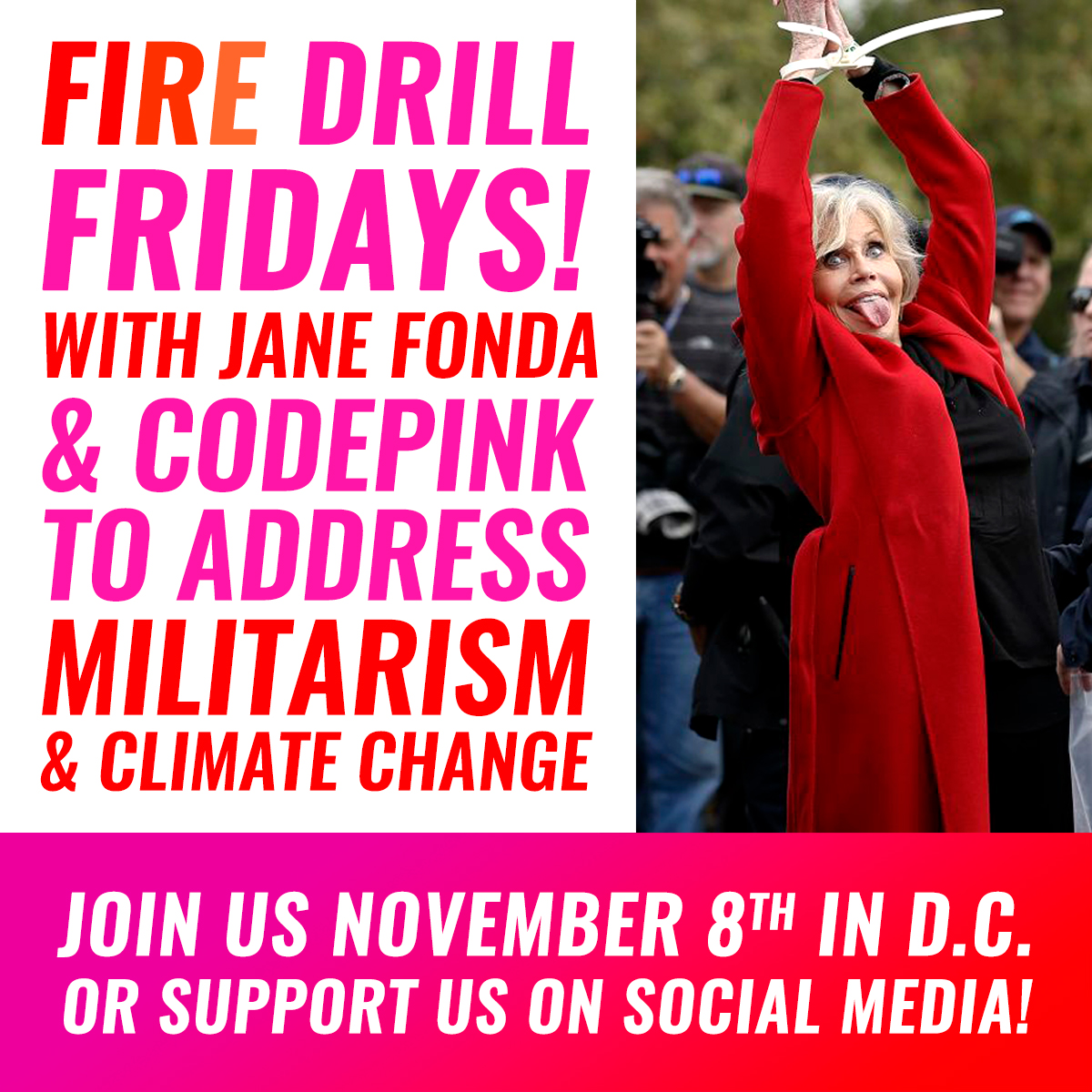 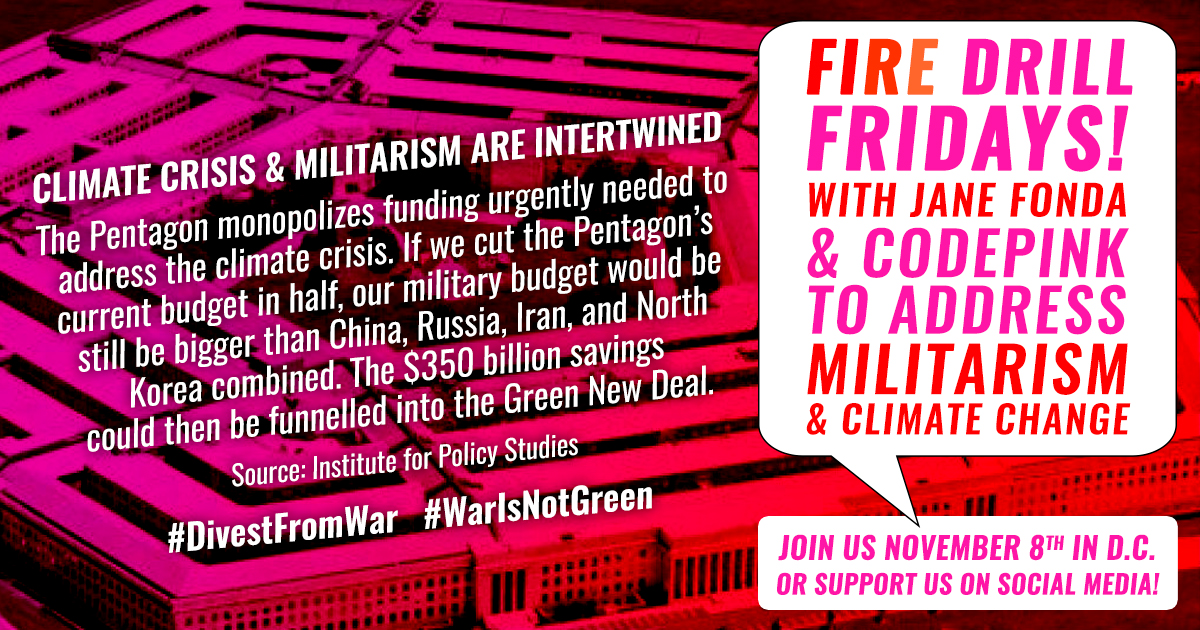 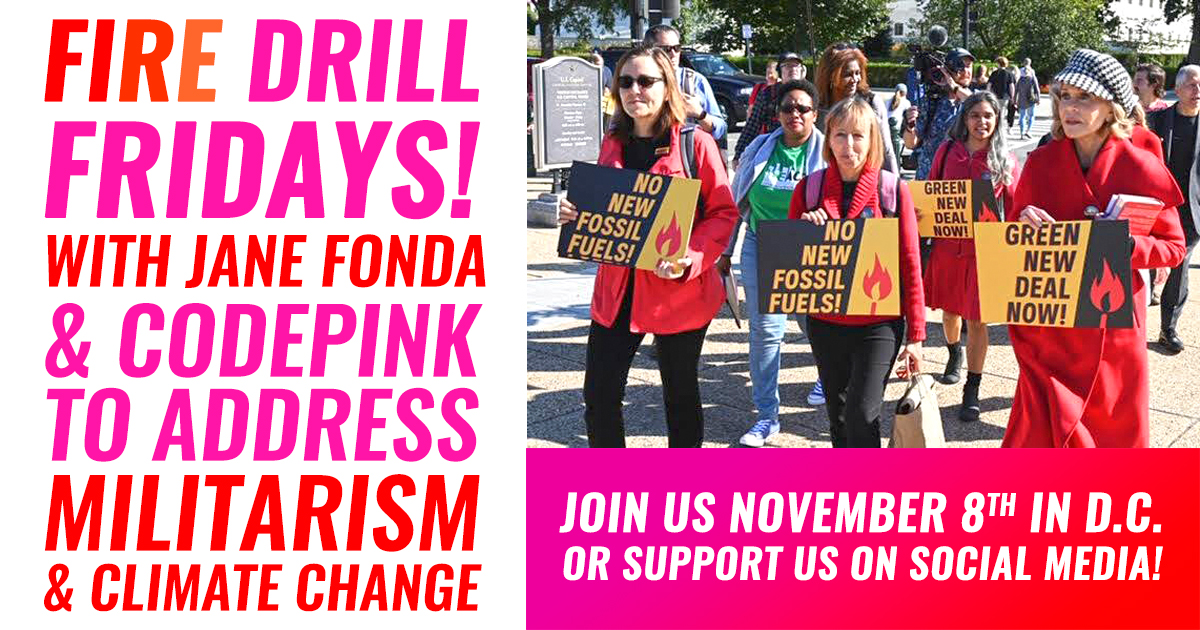 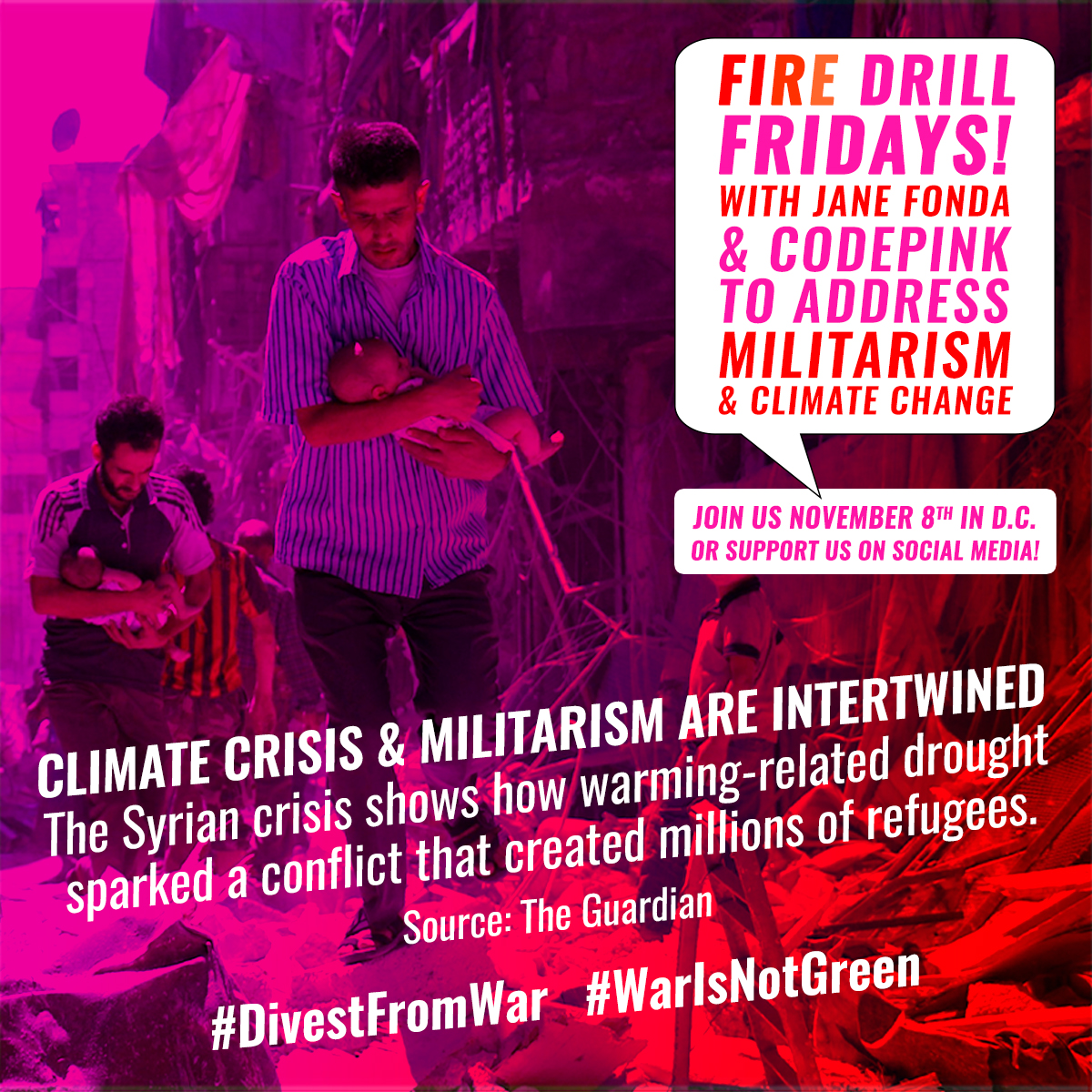 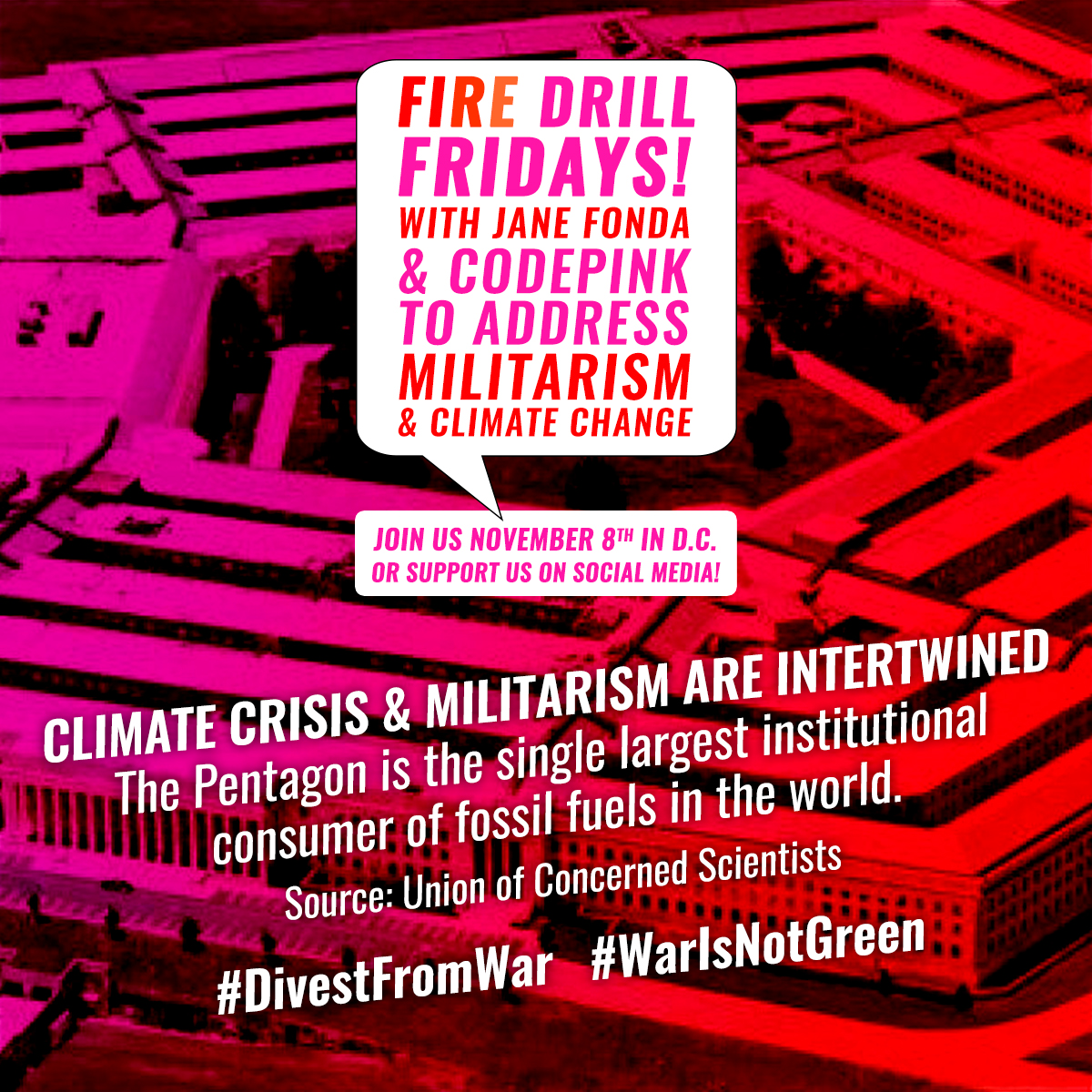 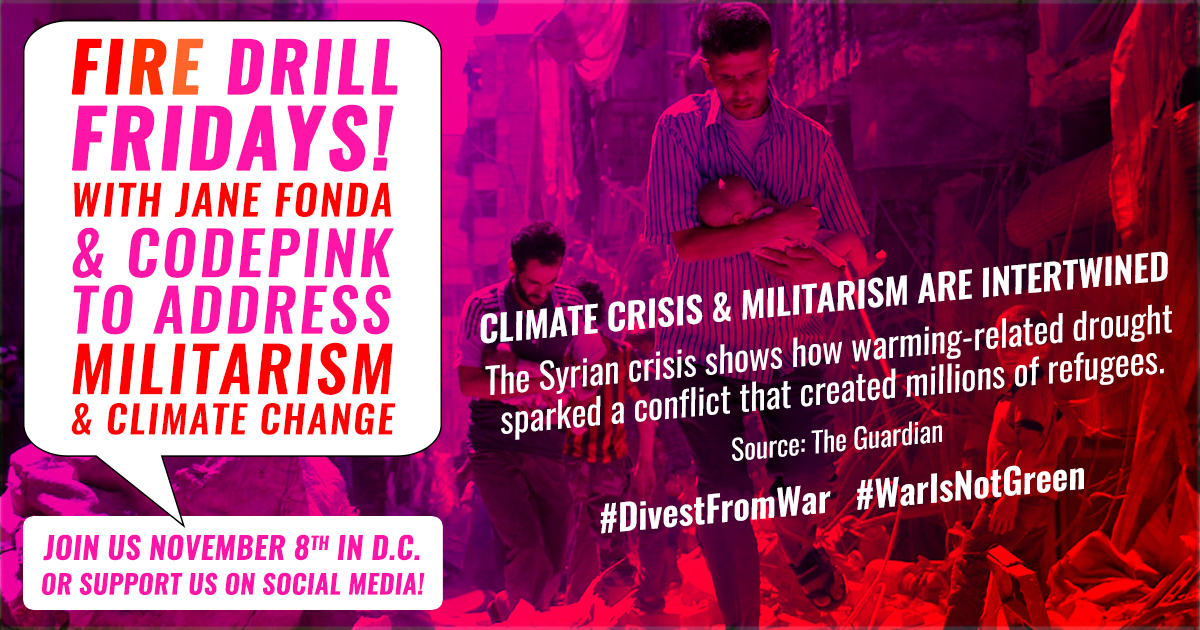 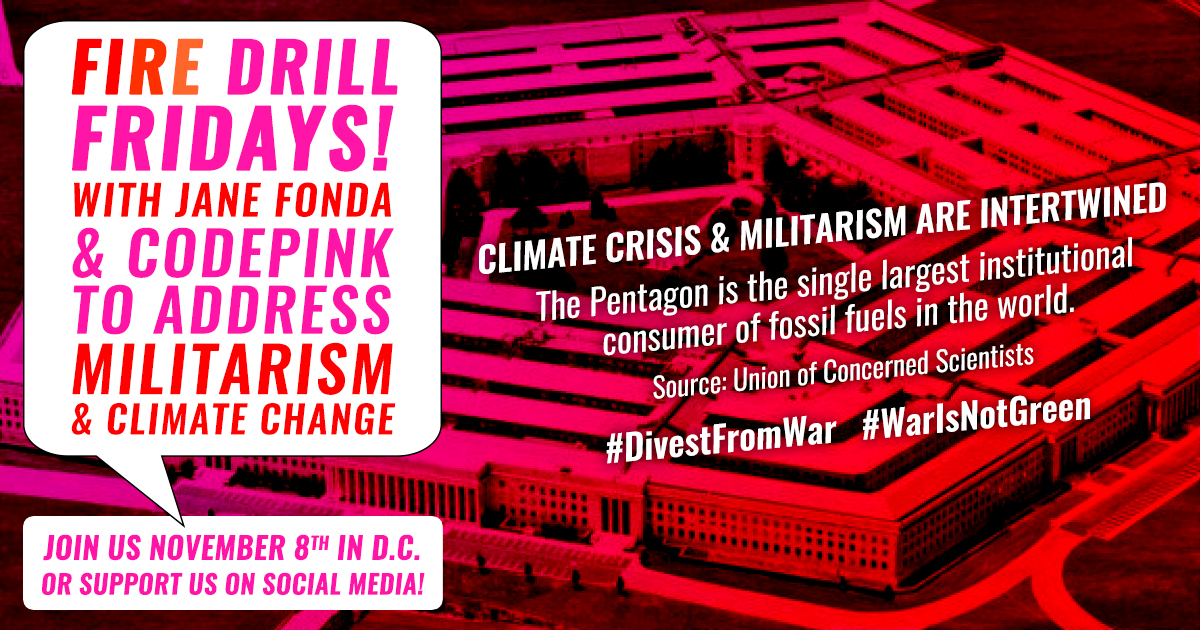 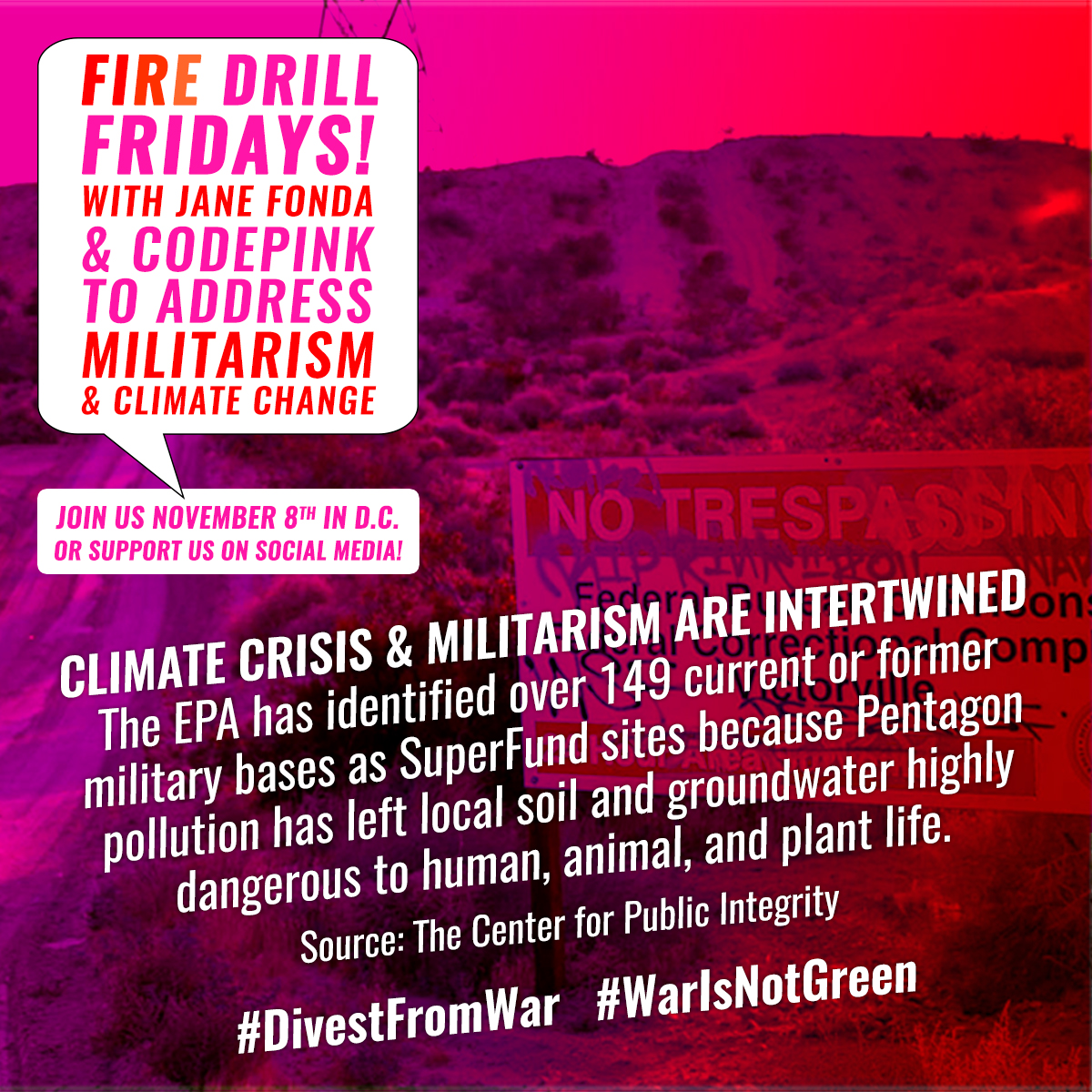 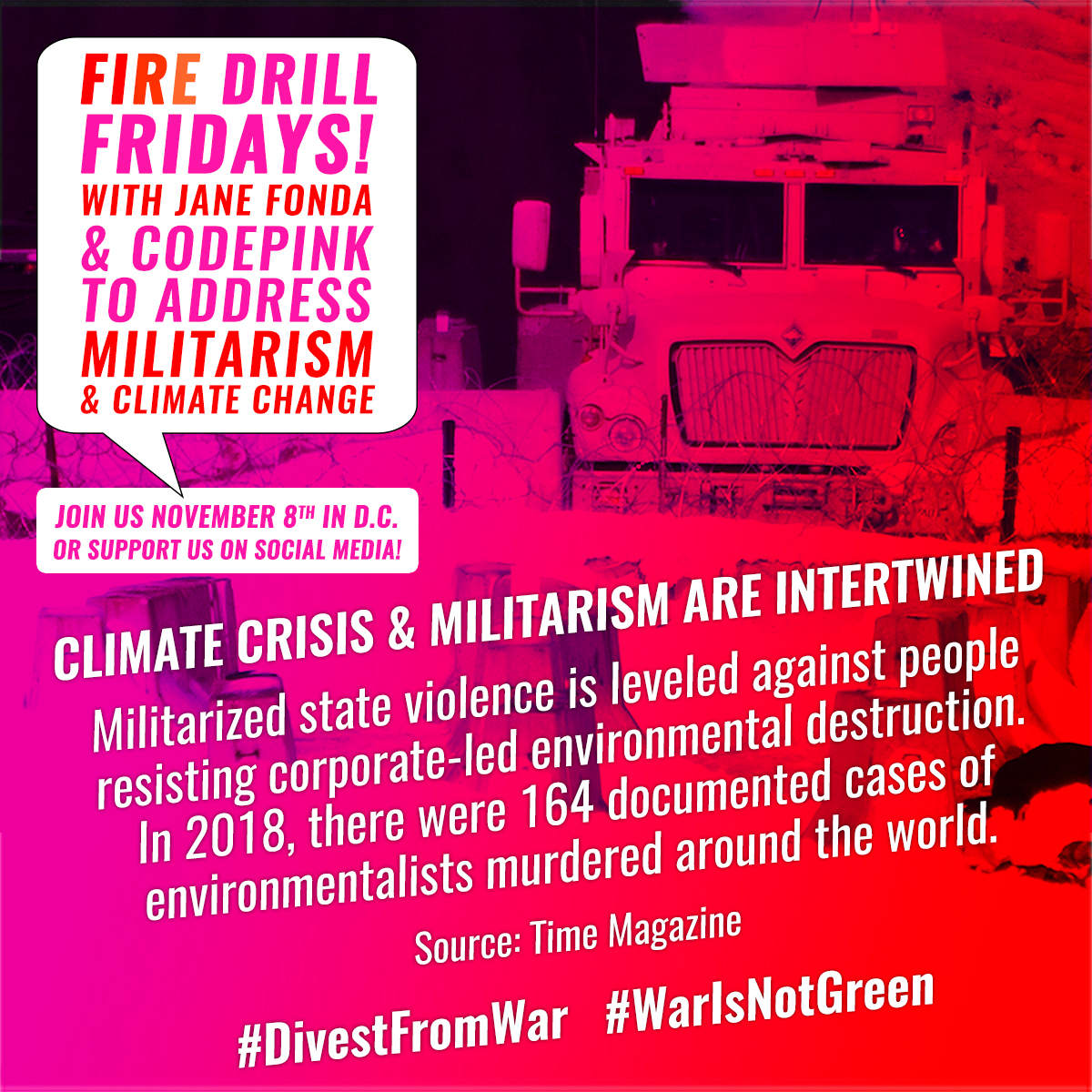 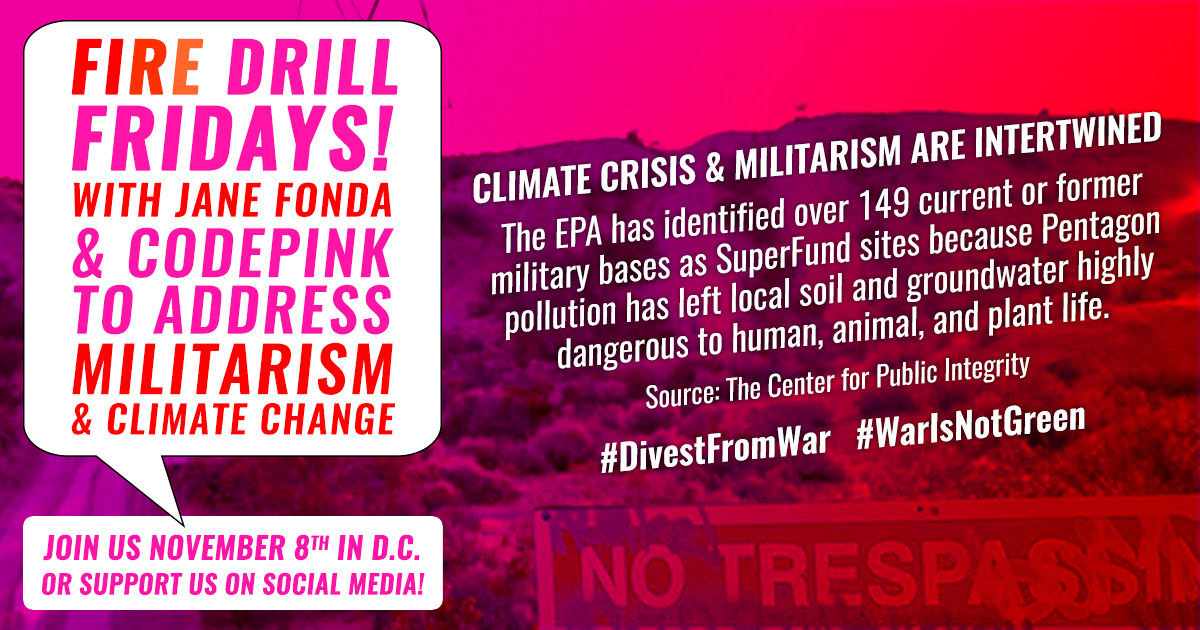 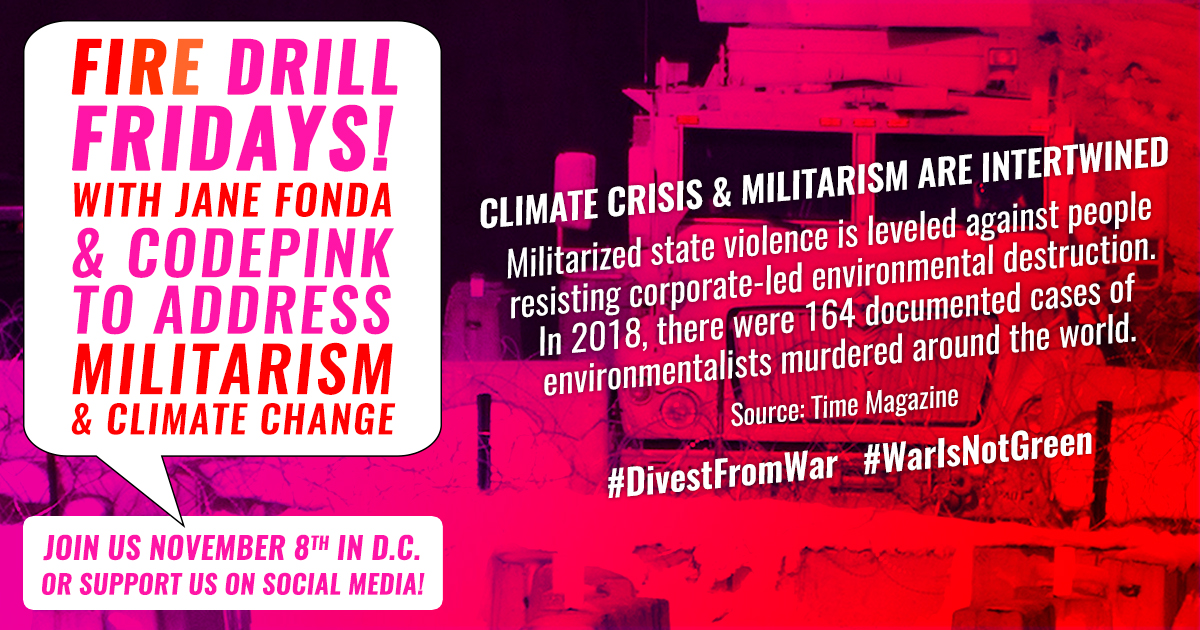 64% of US discretionary spending is wasted on the military, which pollutes our planet more than 140 countries combined!

Join @CODEPINK on Nov. 8th at @JaneFonda's #FireDrillFridays as we hold the Pentagon accountable for this reckless pollution!

That’s why we’re asking you to join @CODEPINK at @JaneFonda’s #FireDrillFridays on Nov. 8th to demand #ClimateAction now!

The US could afford a #GreenNewDeal if it didn't spend $716 billion a year on the military. That’s why @CODEPINK is joining @JaneFonda at @FireDrillFriday on Nov. 8th. Join us this Friday as we address how militarism fans the fires of #ClimateChange. https://bit.ly/2PwtC9J

If we’re going to avert a #ClimateCrisis, we have to hold the US military accountable. Join @CODEPINK in the call to #DivestFromWar at @JaneFonda's @FireDrillFriday on November 8th!

The US military pollutes our planet more than 140 countries combined. @CODEPINK is holding US militarism accountable for #ClimateChange on November 8th, when they join @JaneFonda at @FireDrillFriday. Help us fight for a green future!

Did you know that the Pentagon spends 64% of our discretionary budget on the military, which is responsible for polluting our planet more than 140 countries combined!?

Can you imagine all the ways we could help our planet if we invested the funds wasted on the military into green alternatives that promote peace?

A green future is possible. But to do so, we must unite in the struggle against militarism and #ClimateChange. That's why @CODEPINK:Women for Peace is welcoming you to join them at Jane Fonda’s #FireDrillFridays this Friday, November 8th, as they urge the U.S. government to #DivestFromWar.

Did you know that over $700 billion was spent on the US military this year alone?!

Militarism and war is an existential threat to human life and is one of the leading causes of #ClimateChange.

@CODEPINK:Women for Peace wants to help the U.S. #DivestFromWar and invest in a green future instead! That’s why CODEPINK is joining Jane Fonda this #FireDrillFriday as she addresses the intersection between militarism and climate catastrophe.

CODEPINK welcomes you to join in the fight for a green future without war! Join CODEPINK and Jane this Fire Drill Friday or support them on social media as they call attention to the severity of climate change and its connection to militarism. Together, we can educate the world that #WarIsNotGreen.

We can’t continue to neglect the connection between war and climate change. We need to act now to keep climate change from destroying more lives.

Join @CODEPINK:Women for Peace at Jane Fonda’s #FireDrillFriday on November 8th as they fight against militarism, war and climate change.