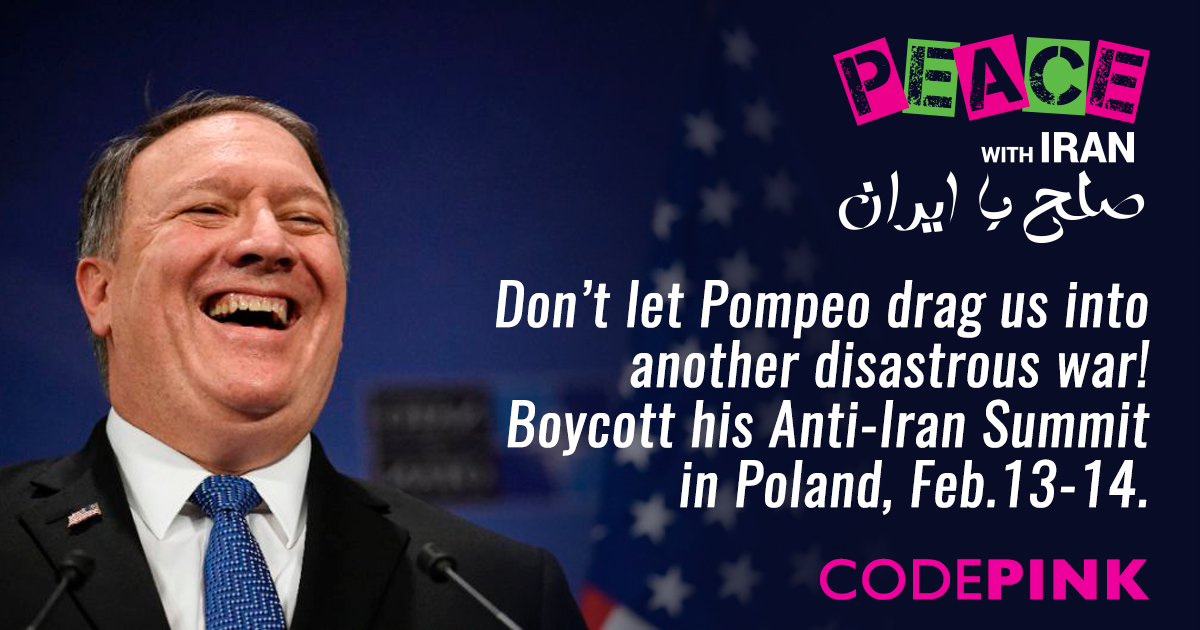 On February 13-14, the U.S. will host a summit on the Middle East in Warsaw, Poland. The aim of the conference will be to set the stage for an unnecessary conflict with Iran.

Instead of a summit to confront Iran, we need the world to pressure the United States to reenter the Iran nuclear deal after Trump’s unilateral withdrawal and to lift the devastating sanctions it has imposed on Iran. Sign our letter asking EU countries to skip Pompeo’s belligerent conference in Warsaw next month and instead host a gathering on Middle East peace with all Middle Eastern nations including Iran.

Dear Representatives of the European Union,

US Secretary of State Mike Pompeo recently announced that the United States and Poland will jointly host a ministerial meeting on the Middle East in Warsaw on February 13-14. This meeting aims to set the stage for an unnecessary conflict with Iran. We urge you NOT to attend the meeting and instead host an alternative one with all nations of the region, including Iran.

Secretary Pompeo says the summit will bring together representatives from 70 countries from Asia, Africa, the Western Hemisphere, Europe and the Middle East. While the meeting will address issues of peace, stability, freedom and security, a major part of the agenda is, according to Secretary Pompeo, to make sure “that Iran is not a destabilizing force.” This meeting is part of the US campaign against Iran that includes withdrawing from the Iran nuclear agreement and re-imposing sanctions that the U.S. had lifted as part of the deal.

A major step forward for peace and security in the Middle East was precisely the Iran nuclear agreement, which was negotiated by the US, Iran, France, the UK, Germany, Russia and China, and was approved by the European Union and the UN Security Council. The other signatories have remained in the agreement and have been looking for ways to circumvent US sanctions on Iran. It is the Trump administration’s withdrawal from the long-negotiated agreement and its increased hostility towards Iran that have added to the instability of the region and are threatening to unleash another devastating war in the Middle East.

The US is fanning the flames of conflict.

Since European countries are still a party to the Iran nuclear agreement and want to improve relations with Iran, it would not make sense for Europe to participate in a conference hostile to Iran. Your non-participation would send a critical message to other countries to follow your lead.

We urge all nations to skip this conference and instead pressure the US administration to rejoin the Iran nuclear agreement. We urge you to host an alternative gathering with all Middle Eastern nations, including Iran, to stop terrorism and end wars, including the catastrophic war in Yemen.