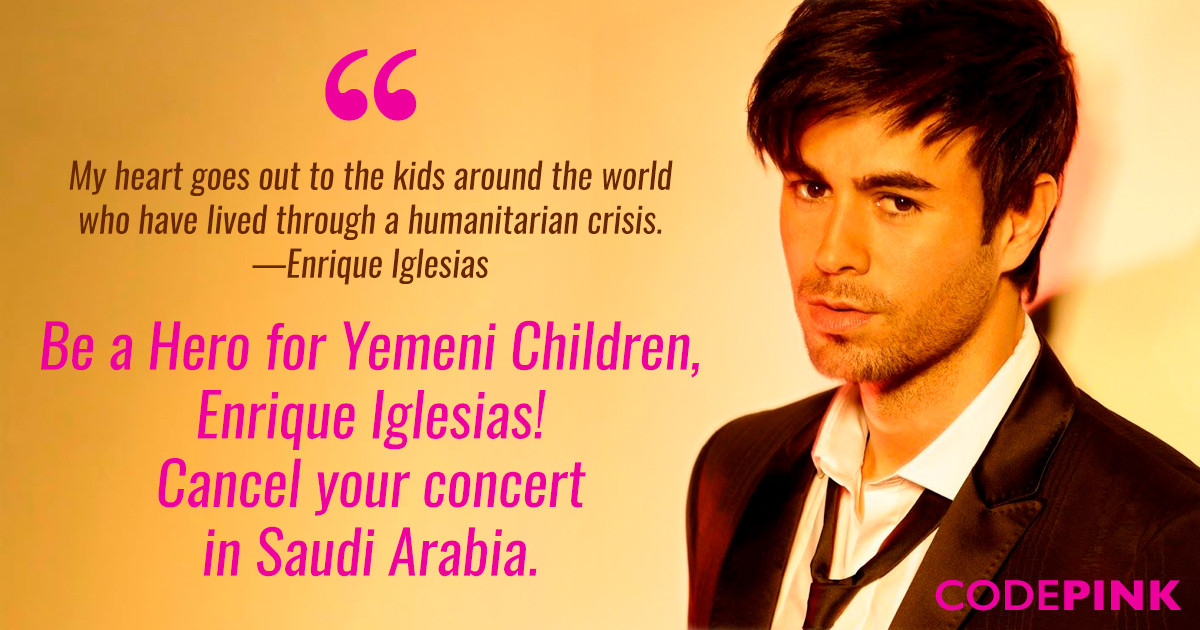 Enrique Iglesias — widely known as the King of Latin Pop — partners with Save the Children to help kids in emergency situations. “I’m extremely excited to partner with Save the Children to help kids who need it the most,” he said in 2017. “My heart goes out to the kids around the world who have lived through a humanitarian crisis and have to rebuild their lives from scratch,”

Yemen is the worst humanitarian crisis on the planet. The situation is so severe that every ten minutes a child in Yemen dies from malnutrition as a result of the Saudi-led bombing campaign. But, because it is a manmade crisis created by war and because it is ongoing, there is no opportunity for communities to receive aid to rebuild. Children in Yemen just want to live.

Please add your name to our letter appealing to Enrique Iglesias to act for the children of Yemen by canceling his February 2020 concert in Saudi Arabia.

We appeal to you to cancel your February 21, 2020 concert at the Tantora cultural festival in Al Ula, Saudi Arabia.

You have for a long time partnered with Save the Children, in 2017 saying: “My heart goes out to the kids around the world who have lived through a humanitarian crisis and have to rebuild their lives from scratch,” But, in Yemen, because it is a manmade crisis and the Saudi-led war is ongoing, there is no opportunity for communities to receive aid to rebuild. Yemen is the worst humanitarian crisis on the planet. Since 2015, when the war began, around 85,000 children under the age of five have died of hunger and more continue to perish every day. According to the UN, that’s one child every around every ten minutes.

Though Saudi women have recently seen a small increase basic rights as they were granted the right to drive in 2018, the very women who campaigned for this right in Saudi Arabia have since been arrested, imprisoned, and tortured through electroshock, beatings, sexual harassment, and waterboarding. On August 1, 2019, Saudi Arabia announced that they would be doing away with part of their oppressive male guardianship system, finally allowing women to travel without permission from a male relative, but Saudi women still have to get the permission of their male guardian to marry or divorce and they still face state-sponsored misogyny and gender-segregation.

We hope for the sake of Yemeni children, Saudi women, minorities, dissidents and journalists — including justice for Jamal Khashoggi —, you will decide to follow Nicki’s Minaj’s lead and cancel your February 21 concert at the Tantora festival in Saudi Arabia.