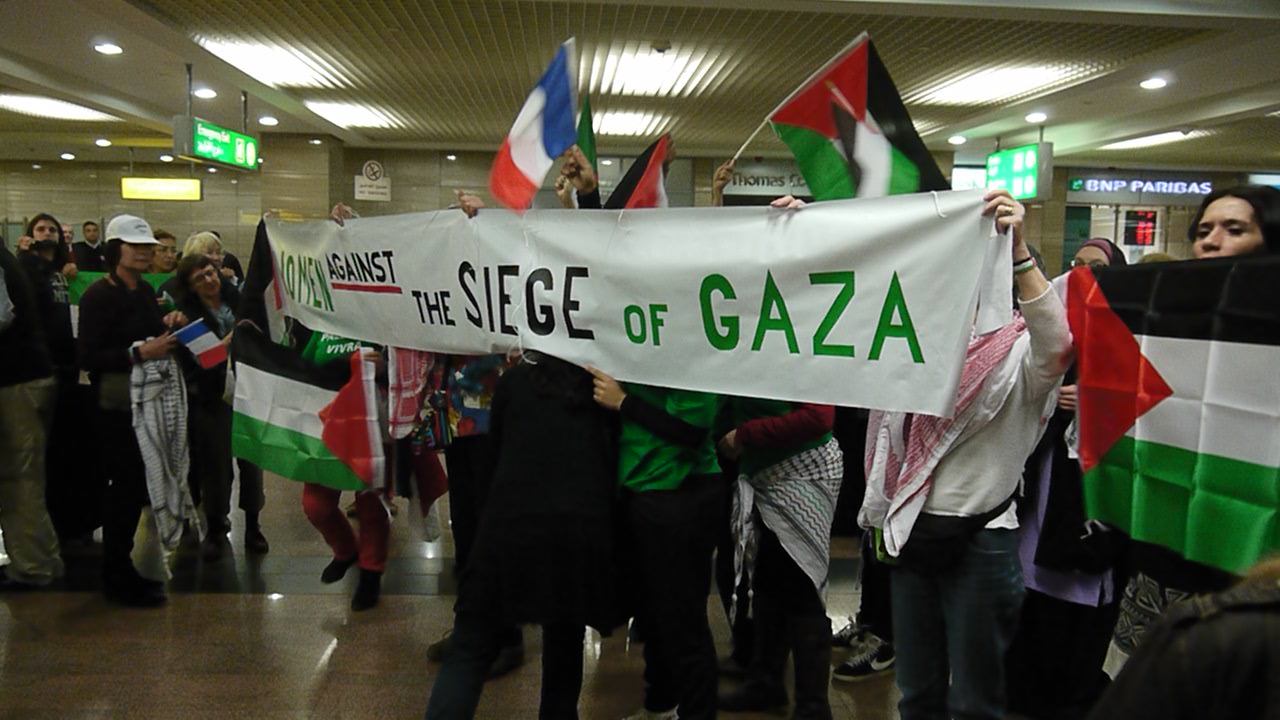 On International Women’s Day, although I woke up in America, my heart was in Gaza. After having been detained for over 22 hours in the Cairo airport without explanation, I had been deported to London and ultimately sent back to America. I was the youngest American of an International Women’s Day Delegation bound for Gaza to answer the call of the women of Gaza issued to the women of the world to come and stand with them in solidarity. We were “armed” with microscopes for hospitals, toys for children, chocolate gifts, and solar lamps as a gesture to give them light in the darkness caused literally and figuratively by the Israeli blockade. As I sat stuck with an amazing group of forty women from around the world between passport control and the arrival gates exit, our thoughts were constantly with the women we were on a mission to visit.

Tired from my seventeen hour flight and looking forward to finally crashing in a bed at the hotel, I was surprised when the guard at passport control picked up the phone after stamping my passport and then told me to go sit down without giving my passport back to me. I knew that it would be difficult to get into Gaza, but I did not think it would be difficult to get into Cairo at least.

At first I was still optimistic about getting in. Within the first hour of my detention, a large group of French women arrived, joining the eight French women who had been on my flight, all of them hoping to get to Gaza. When they learned that the French who had initially arrived had their passports taken while they were detained, the new group refused to even try to get in. They made it clear from the start: all of them were getting in or none of them were. They made it difficult for the authorities because they did not hand over their passports.

I was at first surprised by their solidarity and did not join in when they started to chant and sing and wave Palestinian and French flags. However I quickly realized they had the right idea; by forming a group and making one loud and unified demand, the authorities were forced to listen to us. If we had tried our luck, one by one, we would have been swiftly shut down. It made me realize that in this fight to speak the truth and shed light on the countless injustices committed against the Palestinians by the Israelis, we cannot do it alone – we must join as many hands as possible and lift up our voices together.

No one at the airport seemed capable of decision-making, not even the small redheaded man bopping around who was supposedly the owner. It quickly became clear that nothing was going to happen anytime soon, so I, along with my fellow American delegate, Donna, who had been on the same flight, abandoned trying to look like mere tourists and we slowly joined in with clapping, singing, and dancing.

We relinquished our hope that we would be able to get to Gaza and we shifted to a hope that we could somehow make a difference right there, stuck between passport control and the arrival gates exit in the Cairo airport. The authorities roped off the area around us, attempting to separate us from the rest of the airport.

Ironically, it was not our efforts, but theirs that were in vain. Their attempt to contain us only inspired us to clap longer and sing louder. Passerby took photos and videos; some even clapped and danced or cheered. A pilot jetting by us even stopped for a second to give us a thumbs-up.

We were eventually given food and clean water, but as we brought out the solar lamps intended for the women of Gaza, we could not help but think how those women are constantly denied these simple things. The people of Gaza cannot treat their sewage and they must pump it back into the sea. Because there are electricity shortages every single day up to 18 hours a day, they sometimes cannot even do that. The sewage contaminates the aquifer and their drinking water and sometimes it floods entire towns and people and babies drown – yes, they die – in sewage.

We were eventually all deported, not one of us let in even to Cairo, let alone Gaza. A few delegates had gotten in to Cairo before our large group, but they also will not make it to Gaza. As the authorities prepared to deport those of us in the airport, there were vague mutterings that we were “security threats,” but when I asked how I, as a twenty-year-old college student who has never been to Egypt, qualified as a “security threat,” no one could answer me.

It breaks my heart that the women of Gaza, contained in the largest open-air prison in the world, cannot even have visitors. In America we would call this cruel even for some of our worst criminals, yet we continue to pay for this oppression with our tax dollars by giving $3 billion a year to Israel, one of the world’s wealthiest nations.

Although we did not get in, we hope that our message has been heard by the women of Gaza and the people around the world: we have not forgotten the women of Gaza and we will continue to carry them in our hearts and speak, yell, and sing the truth until there is justice and accountability for what is being done to the Palestinians.