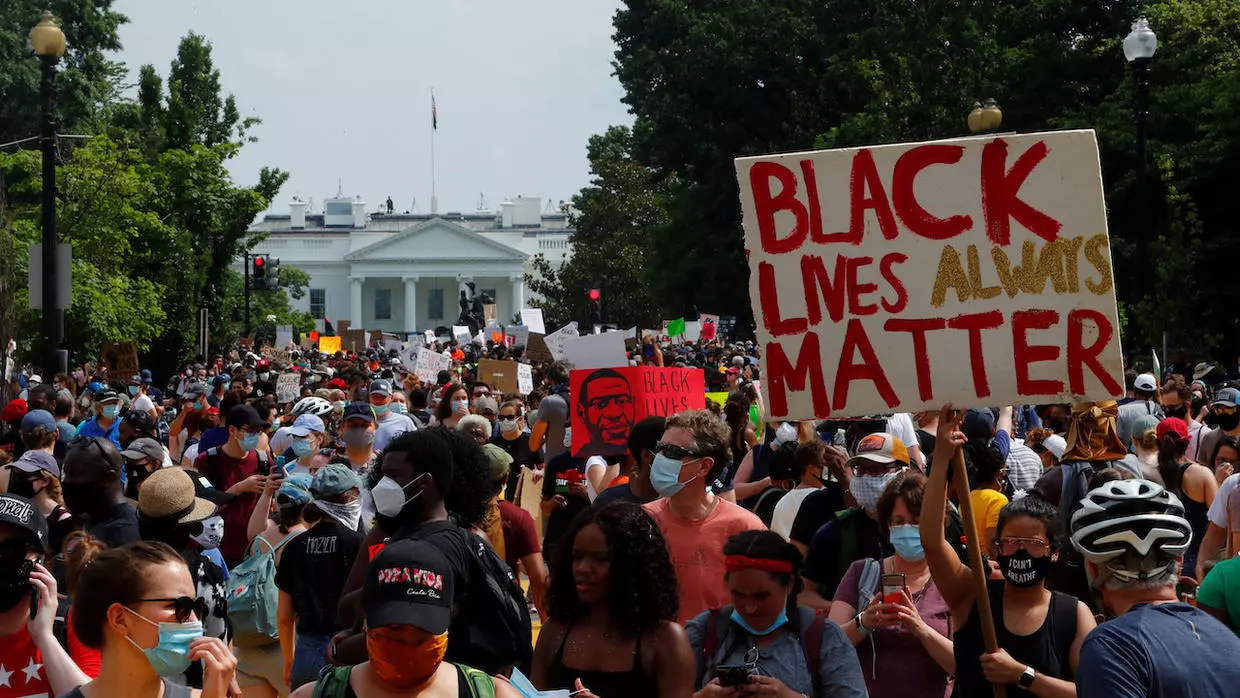 After a week of conflicting orders during which Trump demanded 10,000 troops in the capital, the active-duty troops were finally ordered back to their bases in North Carolina and New York on June 5th, as the peaceful nature of the protests made the use of military force very obviously redundant, dangerous and irresponsible. But Americans were left shell-shocked by the heavily armed troops, the tear gas, the rubber bullets and the tanks that turned U.S. streets into war zones. They were also shocked to realize how easy it was for President Trump, single-handedly, to muster such a chilling array of force.

But we shouldn’t be surprised. We have allowed our corrupt ruling class to build the most destructive war machine in history and to place it in the hands of an erratic and unpredictable president. As protests against police brutality flooded our nation’s streets, Trump felt emboldened to turn this war machine against us—and may well be willing to do it again if there is a contested election in November.

Americans are getting a small taste of the fire and fury that the U.S. military and its allies inflict on people overseas on a regular basis from Iraq and Afghanistan to Yemen and Palestine, and the intimidation felt by the people of Iran, Venezuela, North Korea and other countries that have long lived under U.S. threats to bomb, attack or invade them.

For African-Americans, the latest round of fury unleashed by the police and military is only an escalation of the low-grade war that America’s rulers have waged against them for centuries. From the horrors of slavery to post-Civil War convict leasing to the apartheid Jim Crow system to today's mass criminalization, mass incarceration and militarized policing, America has always treated African-Americans as a permanent underclass to be exploited and “kept in their place” with as much force and brutality as that takes.

Today, Black Americans are at least four times as likely to be shot by police as white Americans and six times as likely to be thrown in prison. Black drivers are three times more likely to be searched and twice as likely to be arrested during traffic stops, even though police have better luck finding contraband in white people's cars. All of this adds up to a racist policing and prison system, with African-American men as its prime targets, even as U.S. police forces are increasingly militarized and armed by the Pentagon.

Racist persecution does not end when African-Americans walk out the prison gate. In 2010, a third of African-American men had a felony conviction on their record, closing doors to jobs, housing, student aid, safety net programs like SNAP and cash assistance, and in some states the right to vote. From the first "stop and frisk" or traffic stop, African-American men face a system designed to entrap them in permanent second-class citizenship and poverty.

Just as the people of Iran, North Korea and Venezuela suffer from poverty, hunger, preventable disease and death as the intended results of brutal U.S. economic sanctions, systemic racism has similar effects in the U.S., keeping African-Americans in exceptional poverty, with double the infant mortality rate of whites and schools that are as segregated and unequal as when segregation was legal. These underlying disparities in health and living standards appear to be the main reason why African-Americans are dying from Covid-19 at more than double the rate of White Americans.

While the U.S. war on the black population at home is now exposed for all of America--and the world--to see, the victims of U.S. wars abroad continue to be hidden. Trump has escalated the horrific wars he inherited from Obama, dropping more bombs and missiles in 3 years than either Bush II or Obama did in their first terms.

But Americans don’t see the terrifying fireballs of the bombs. They don’t see the dead and maimed bodies and rubble the bombs leave in their wake. American public discourse about war has revolved almost entirely around the experiences and sacrifices of U.S. troops, who are, after all, our family members and neighbors. Like the double standard between white and black lives in the U.S., there is a similar double standard between the lives of U.S. troops and the millions of casualties and ruined lives on the other side of the conflicts the U.S. armed forces and U.S. weapons unleash on other countries.

When retired generals speak out against Trump’s desire to deploy active-duty troops on America’s streets, we should understand that they are defending precisely this double standard. Despite draining the U.S. Treasury to wreak horrific violence against people in other countries, while failing to “win” wars even on its own confused terms, the U.S. military has maintained a surprisingly good reputation with the U.S. public. This has largely exempted the armed forces from growing public disgust with the systemic corruption of other American institutions.

Generals Mattis and Allen, who came out against Trump’s deployment of U.S. troops against peaceful protesters, understand very well that the fastest way to squander the military’s “teflon” public reputation would be to deploy it more widely and openly against Americans within the United States.

Just as we are exposing the rot in U.S. police forces and calling for defunding the police, so we must expose the rot in U.S. foreign policy and call for defunding the Pentagon. U.S. wars on people in other countries are driven by the same racism and ruling class economic interests as the war against African-Americans in our cities. For too long, we have let cynical politicians and business leaders divide and rule us, funding police and the Pentagon over real human needs, pitting us against each other at home and leading us off to wars against our neighbors abroad.

The double standard that sanctifies the lives of U.S. troops over those of the people whose countries they bomb and invade is as cynical and deadly as the one that values white lives over black ones in America. As we chant “Black Lives Matter,” we should include the lives of black and brown people dying every day from U.S. sanctions in Venezuela, the lives of black and brown people being blown up by U.S. bombs in Yemen and Afghanistan, the lives of people of color in Palestine who are tear-gassed, beaten and shot with Israeli weapons funded by U.S-taxpayers. We must be ready to show solidarity with people defending themselves against U.S.-sponsored violence whether in Minneapolis, New York and Los Angeles, or Afghanistan, Gaza and Iran.

This past week, our friends around the world have given us a magnificent example of what this kind of international solidarity looks like. From London, Copenhagen and Berlin to New Zealand, Canada and Nigeria, people have poured into the streets to show solidarity with African-Americans. They understand that the U.S. lies at the heart of a racist political and economic international order that still dominates the world 60 years after the formal end of Western colonialism. They understand that our struggle is their struggle, and we should understand that their future is also our future.

So as others stand with us, we must also stand with them. Together we must seize this moment to move from incremental reform to real systemic change, not just within the U.S. but throughout the racist, neocolonial world that is policed by the U.S. military.

Take a look at the Poor People’s Campaign Moral Budget, which calls for deep cuts in annual military spending and add your name as an endorser.