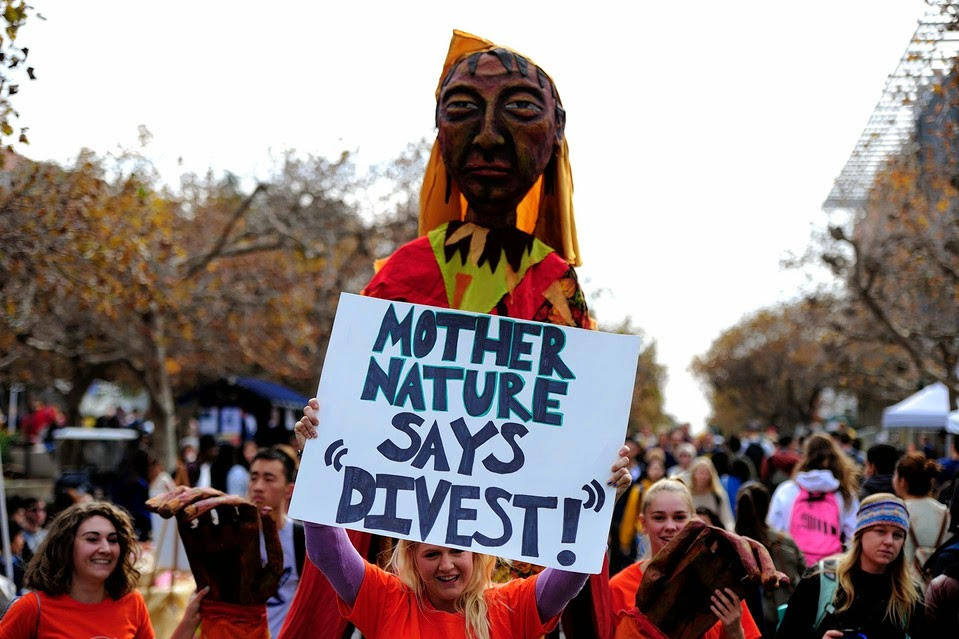 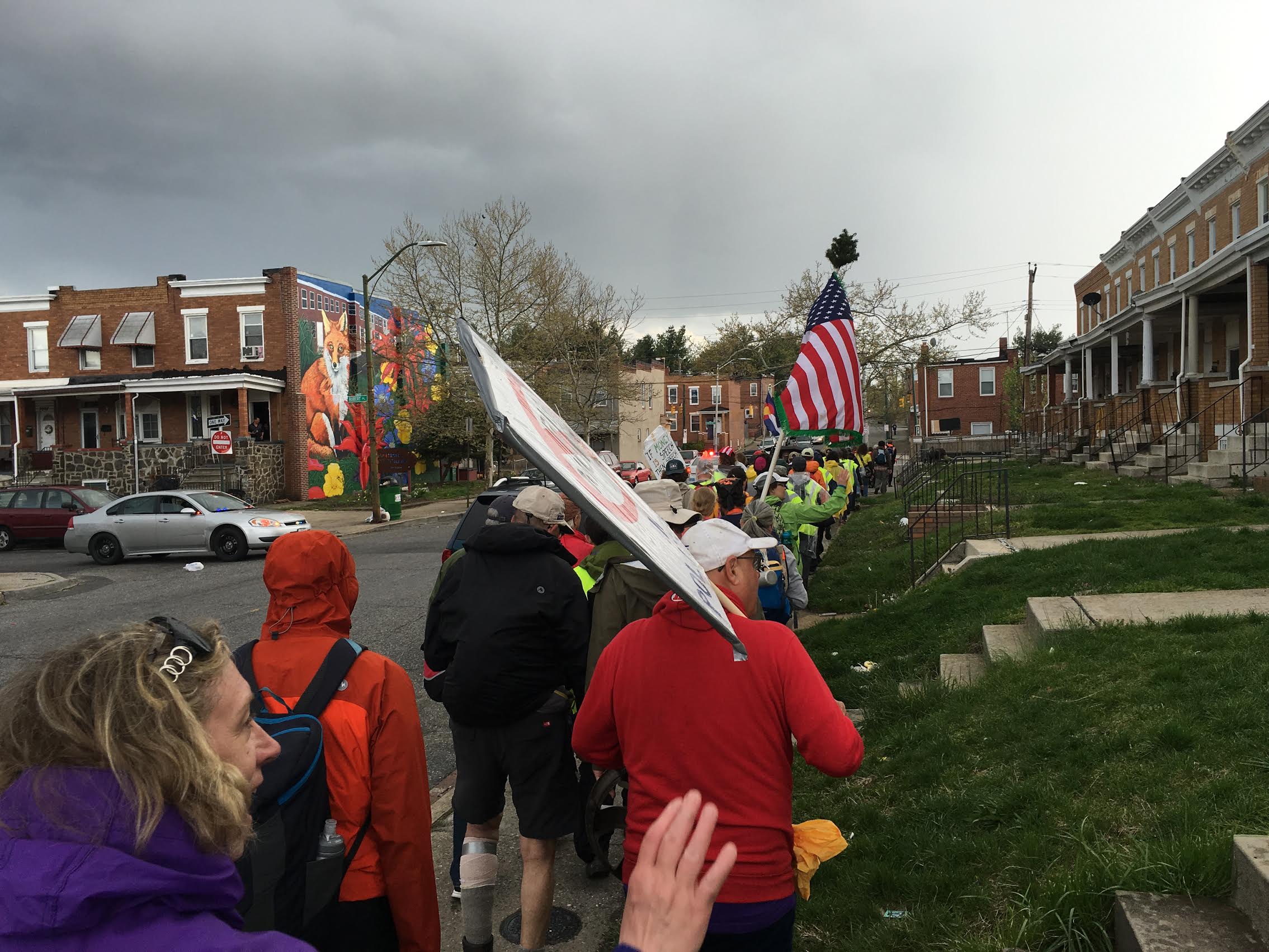 As we prepare to walk into Washington DC with Democracy Spring's march against oligarchy rule of our government, one thing becomes clear: democracy is held together with a big heart and a whole lot of duct tape.

It takes caring and committed individuals to walk 150 miles through rain, wind, and across highways and byways to take a stand against the moneyed elite who have hijacked our government. The march requires selfless individuals to patch up our broken feet at the end of the day, to feed us, to keep us safe on the roads, and to make sure we have enough sunscreen or ponchos. Warmth emanates from the members of churches and community centers who house us and feed us dinners prepared with a whole lot of love.

When we collapse on these church floors after a day of marching nearly twenty miles, the rooms look like mash units with veterans scattered about. The saintly figure of Zak moves from one downed figure to the next, applying ointment and lotions to blistered and battered feet, often working long into the night to make sure that everyone receives attention and care. He has become such a critical person to the march that I was astounded to hear that he signed up just eight days before it began, and that he had little idea of the role he was soon to play. 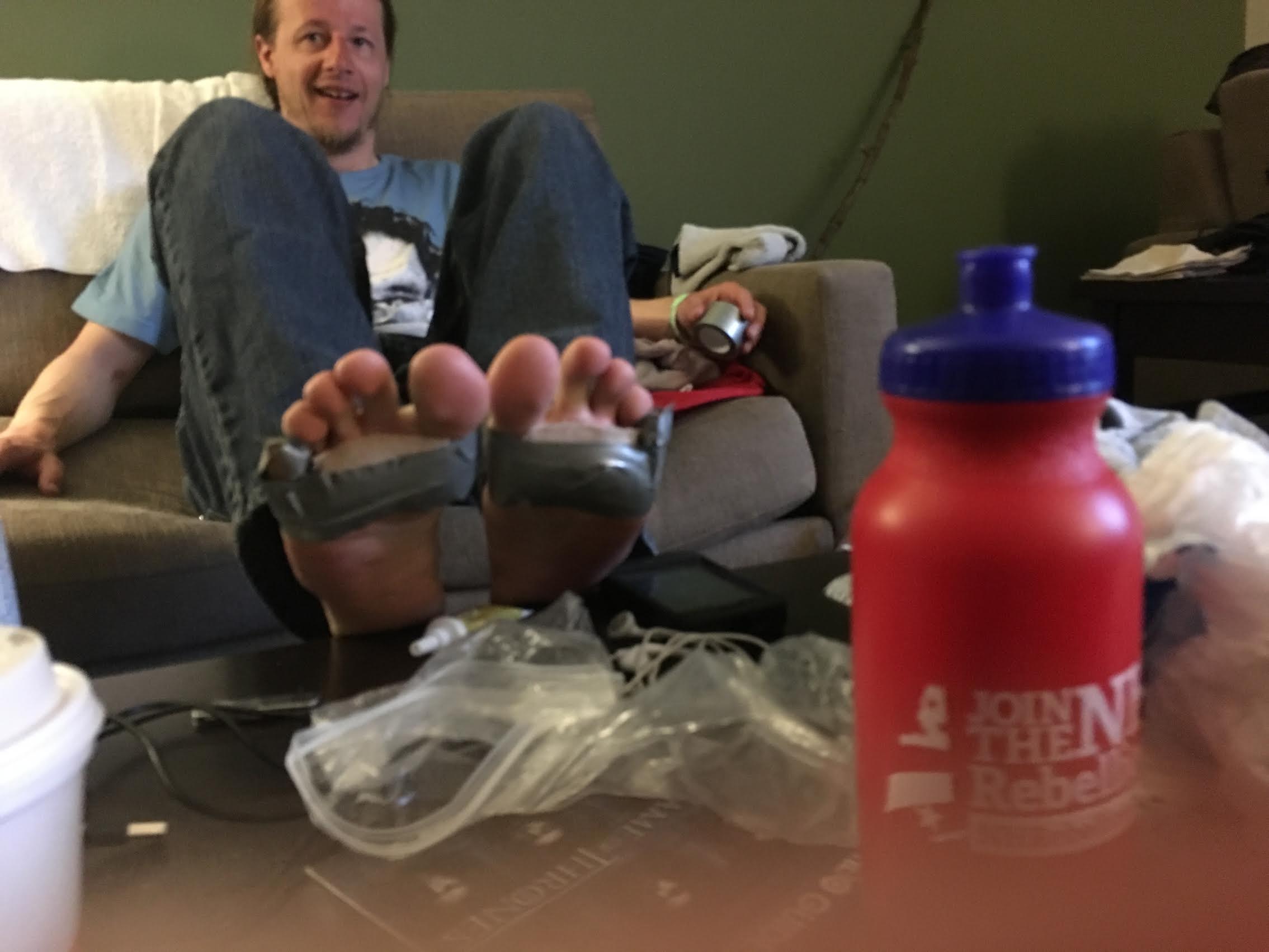 “I thought there was going to be a small team of medics, and that maybe I would play a small part,” he told me as we walked at the edge of the highway in driving rain. “I actually grabbed my first aid kit at the last moment, not even thinking I would need it. It's a good thing I brought it.”

Indeed, Zak. And it's a good thing that you brought that big heart of yours, which propels you to helping wounded walkers at every lunch and rest stop along the route. Thanks to the organizers that we have all that duct tape to cover blistered feet and to hold ponchos and feet together.

There's a team of support vehicles that trails along with us, shielding us from aggressive drivers and ferrying us to bathrooms. There's the figure of John who will appear at the side of the road when you least expect it, clapping his hands and cheering us on over another hill. The Native American from Texas named Rain delivers a prayer to the East, West, North and South each morning before we set off, as well as to the heavens, to Mother Earth and to the heart. We often see him at the edge of a parking lot blowing his conch to propel us onward. 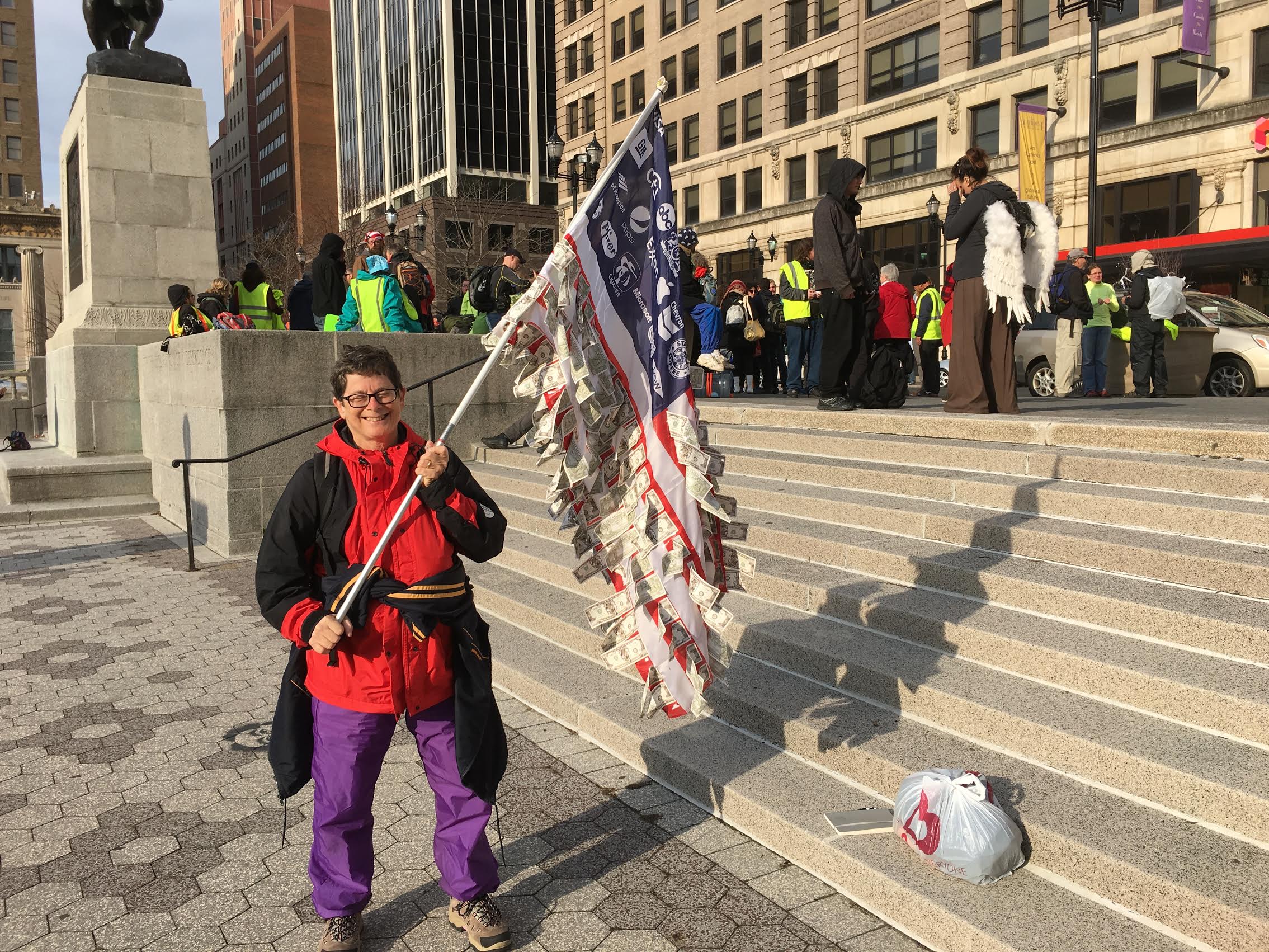 And there are the walkers themselves, a most varied, compassionate, and rebellious lot, who hail from all walks of life. There's the Japanese Buddhist nun Jun Yasuda, who tirelessly beats her drum and chants a prayer for peace. She participated in “The Longest Walk” from San Francisco to Washington DC with Native American activist Dennis Banks and built a peace pagoda in New York. There's 77-year old Bill from Gary, Indiana, who is a veteran of the riots in 1968 at the Democratic National Convention and who keeps us laughing with his sharp wit. There are those from 99 Rise, like Richard from West Virginia, who stood up at the Supreme Court to shout their opposition to Citizens United in the tradition of non-violent dissent and who still battle in the courts for their freedom.

Many walkers came just because they are pissed off at being had again and again, like Megan from New Jersey, or Jacob from DC, or James from Montana. An energy pulses up and down the line of marchers as we cross through counties. We move from one amazing conversation to the next as volunteers keep us away from obstacles and the ever-present threat of speeding motorists. Members of the Teamsters Union and UAW walk because they are tired of the crony capitalism that continually tries to strip them of a decent wage and secure life.

When we set off, many of us didn't come out here by choice to be away from our families and friends and face arrest. We came because we had to do something. And now that we have developed such a loving and caring society, a lot of us don't want to leave. “I think we'll have to turn around and just march back,” Mike from Florida told a circle of us, who laughed but felt that comment resonate through our bones. 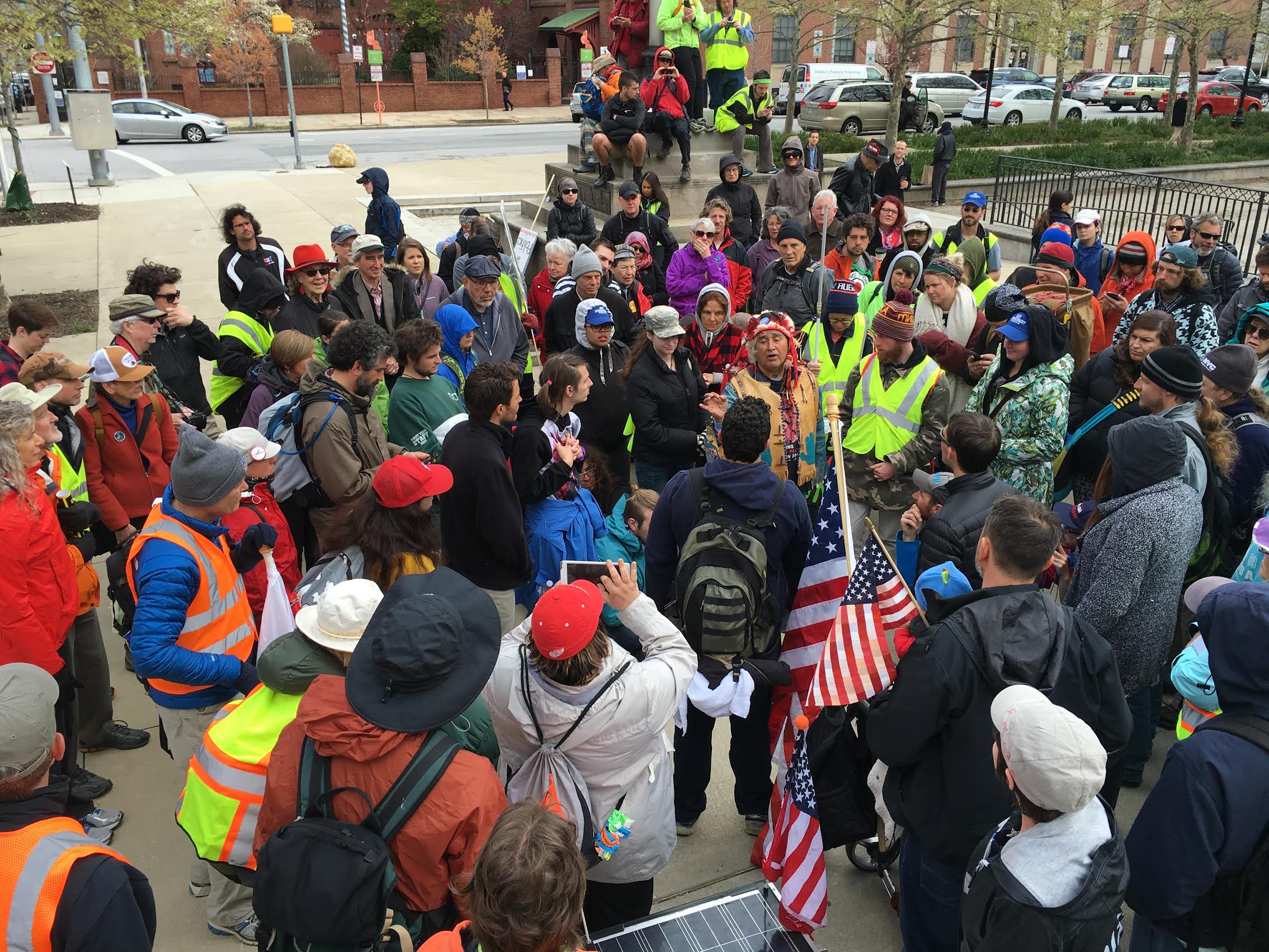 Part of me is infinitely sad that we will stop walking in two days. I love these people around me. But I also know that we are a nucleus of a movement of the people, that we have reached a critical point in our history where we will either fix our broken system with a lot of heart and duct tape or face violence on the streets. We must come together for one another or confront a disastrous fate.

We all know our system is broken. We all know something must be done. But those in power will continue to ignore our demands. They will continue to operate with the selfishness and greed that drives our species towards suicide. The only way we can stop them is through civil disobedience on a massive scale, conducted by people who care, who believe, and who have compassion for their fellow human beings.

We are those people. And we are ready to face arrest on the steps of the Capitol to halt the political corruption that seeps through every pore of our collective psyche. It begins here. We make our stand on Monday. And the next day. And the day after that.

“I want to get arrested every day,” many have spoken. “When they let me out of jail, I will go right back to the Capitol.”

That is the only way we can fix our broken democracy, with a whole lot of heart, determination – and duct tape.