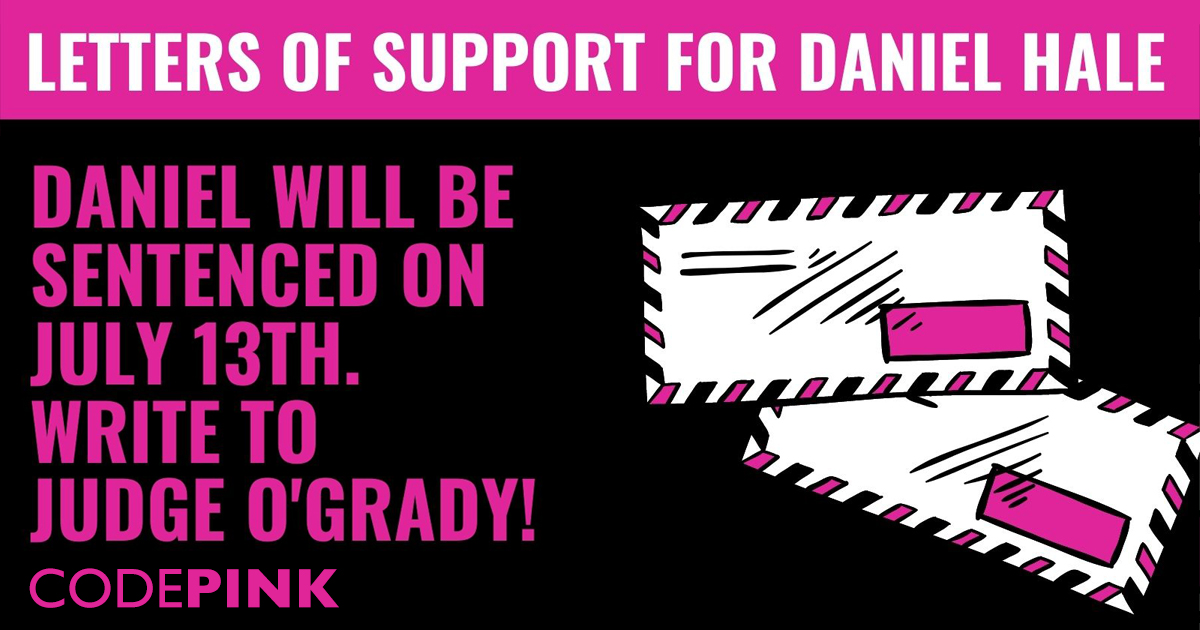 In late March, Daniel Hale pleaded guilty for the crime of letting the American people know the truth about drone warfare. We have known and admired Daniel even since he started speaking out in 2013 against drone warfare, an all-too-easy way of murdering people who are often innocent civilians. Daniel faces up to a decade in prison for just telling the truth. We are asking people to write letters to Judge O’Grady in support of Daniel Hale before his sentencing in September. You can find instructions and suggestions below. If you haven’t done so already, please also sign CODEPINK’s petition to Judge Liam O’Grady asking him to give Daniel no jail time. We are asking people to send these letters through email to Daniel’s lawyer. The email address can be found in Step 5.

Introduce yourself, so the letter is as personal as possible. What is your name? Where are you from? Why is Daniel’s case important to you?

Discuss Daniel’s positive characteristics, hardships faced and the toll the case has taken on him (he has experienced PTSD, loss of work, and financial hardship). If you have ever met Daniel or heard him speak, consider including something about that in the letter. You can listen to Daniel speak at a CODEPINK drone event here, Daniel begins speaking at 28:51.

Discuss the public interest in what he did and explain the public importance of his disclosures.

Send this letter as an email to Daniel’s lawyer (but make sure to direct your message to Judge O’Grady as shown above) at [email protected]. Title the subject line “Letter in Support of Daniel Hale”.

Make sure to remain respectful and polite. Keep the messages personal and why Daniel’s case matters to you individually. Your opinion on political issues like U.S. imperialism won’t be helpful in Daniel’s case :)