Cuban doctors began to arrive, without asking for anything in return 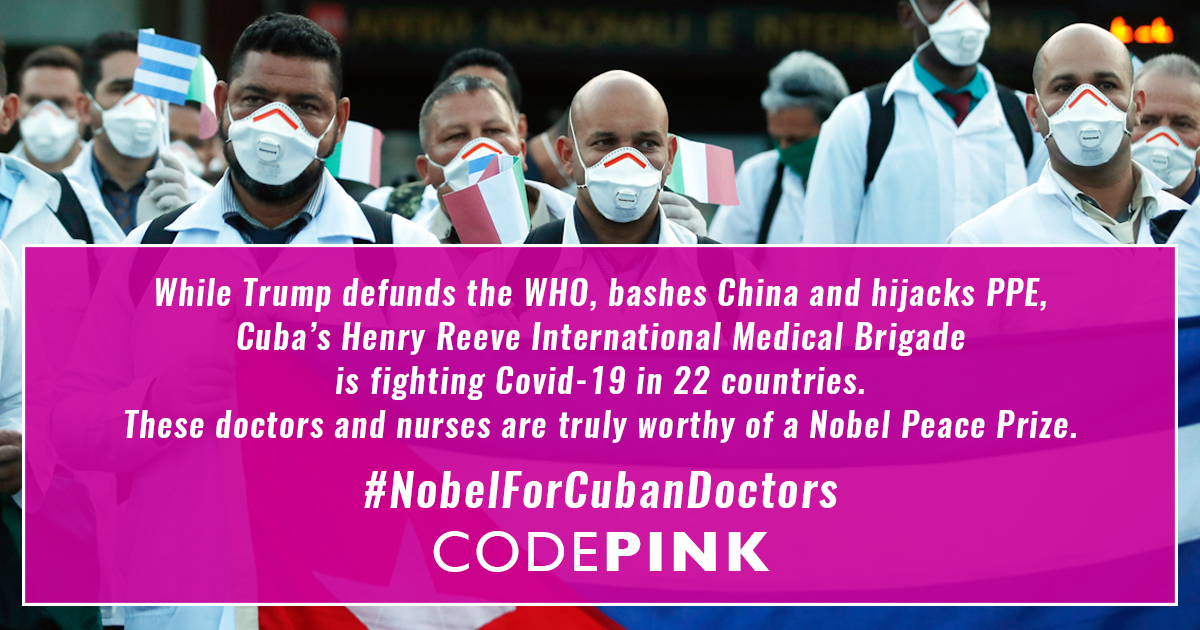 "One day we will tell our children that, after decades of movies and propaganda, at the moment of truth, when humanity needed help at a time when the great powers were in hiding, Cuban doctors began to arrive, without asking anything in return," said Rafael Correa, former president of Ecuador, regarding the Henry Reeve International Medical Brigade, whose doctors and nurses are fighting Covid-19 in 22 countries.

As the Trump administration demonizes Cuba’s doctor program and intensifies its blockade against Cuba, going so far as to confiscate much needed Covid-19 medical supplies, we must stand up for Cuba and highlight the good being done by Cuban doctors around the world.

In recognition of their magnificent solidarity and selflessness, saving thousands of lives by putting their own lives at risk, join us in urging the Nobel Committee to award them this year’s Nobel Peace Prize.

Medical assistance has long been a hallmark of Cuban’s foreign policy: they helped Chilean earthquake victims in 1963; Nicaraguans and Hondurans devastated by Hurricane Mitch in 1998; Indonesia tsunami victims in 2004; Kashmiri earthquake victims in 2005; Haitians after the disastrous 2010 earthquake and subsequent cholera outbreak. They were instrumental in the fight against Ebola in 2014 in Liberia, Guinea and Sierra Leone. They even offered to send help to the U.S. after Hurricane Katrina in 2005, but the Bush administration refused on ideological grounds.

Unfortunately, the deadline for nominations has passed. But there is still a chance, if we can convince a member of the Nobel Peace Prize committee to add them to the list of nominees. If we gather enough support around the world, we think we can do that.

Join us in showing support for the courageous Cuban nurses and doctors risking their lives to fight the coronavirus abroad by working to nominate them for the 2020 Nobel Peace Prize.

A nomination for the Henry Reeve International Medical Brigade, with significant backing from people and social movements around the world, would show the people of Cuba how much we admire them. Such a show of solidarity is particularly important in the face of the escalating sanctions and threats by the Trump administration, and given the events of last week, when an armed man fired an assault rifle at the Cuban Embassy in Washington, D.C.

With love and admiration for the Cuban people,
Medea, Michelle, Teri and Leonardo

P.S. On Wednesday, May 6, at 12 p.m. Eastern, CODEPINK’s Leonardo Flores will interview Josefina Vidal, Cuba’s Ambassador to Canada, to discuss Covid-19, Cuban foreign policy and the Trump administration’s sanctions of Cuba on our weekly WTF is Going on in Latin America webinar.