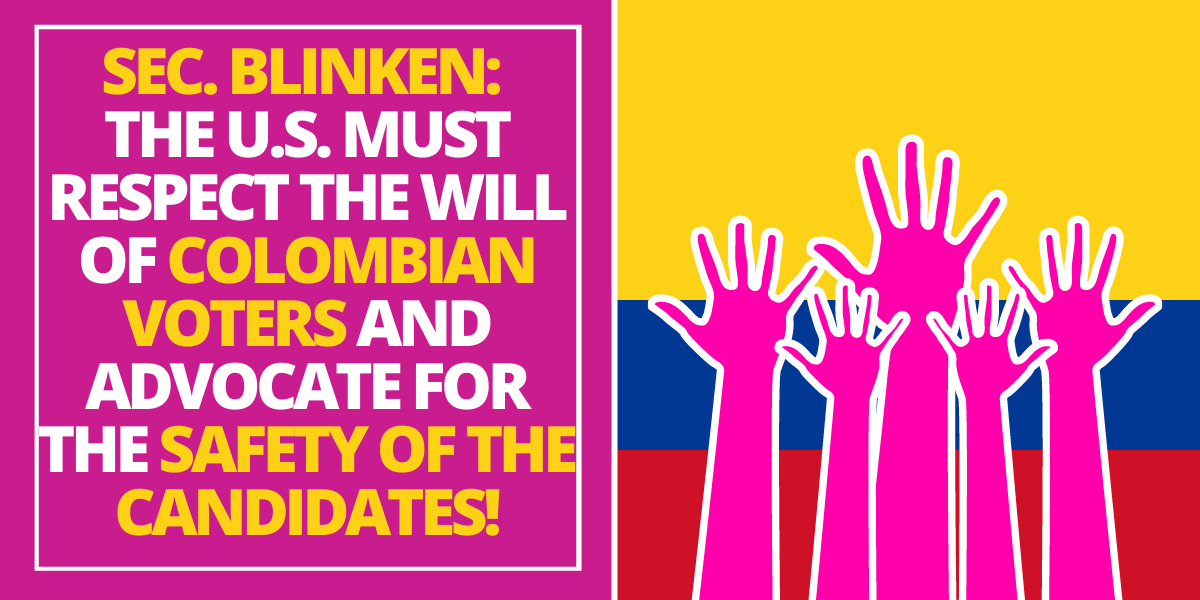 Colombia’s elections are at risk! Tell Secretary Blinken to respect the election’s results and let the Colombian government and military know that anything other than a clean, safe election will be unacceptable!

We have grave concerns that the presidential elections in Colombia are under threat and the results may not reflect the will of the people.

As you know, the leading ticket of Gustavo Petro and Francia Marquez received death threats. They were forced to suspend several campaign stops and had to hold events behind bodyguards with giant shields. Furthermore, General Eduardo Zapateiro, the commander of the Army, interfered in the elections by alleging that Petro is corrupt. This is a clear violation of Article 219 of Colombia’s constitution, which bars members of the military from participating in politics.

Where were the press releases and statements demanding the safety of all candidates and the neutrality of the armed forces? If this had happened in Venezuela, the State Department would not have hesitated to act.

More disturbingly, U.S. ambassador Philip Goldberg and Under Secretary of State for Political Affairs Victoria Nuland, echoed baseless claims by Colombia’s right-wing about alleged Russian interference in the elections. Undermining confidence in a country’s electoral system is not the way an ally should behave.

We call on the State Department to issue an immediate and public denunciation of the threats against Petro and Marquez. We further call on you to make an appeal for a free, fair and safe election, as well as a peaceful transition of power.