Where: US Superior Court of the District of Columbia, 500 Indiana Ave NW, Rm. 315, Washington DC 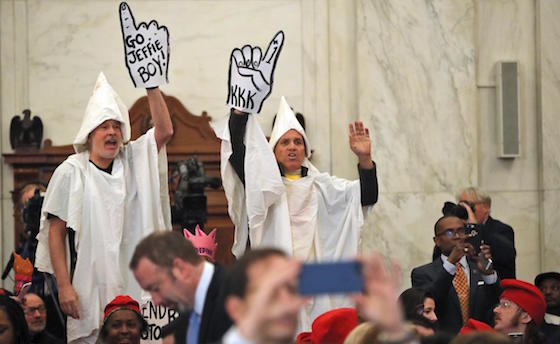 CODEPINK members Tighe Barry, Lenny Bianchi and Desiree Fairooz will stand trial on May 1 for their presence at the January 10 confirmation hearing for Jeff Sessions. The two male defendants stood up before the hearing started, dressed as Klu Klux Klan members with white hoods and robes, and greeted the senator in a parody designed to highlight Sessions racist history.  The third defendant, Desiree Fairooz, was arrested for laughing during the hearing when a senator spoke about Sessions exemplary qualifications for attorney general, and then unfolding a banner reading “Refugees welcome; Stop Sessions” as she was taken out of the room. The defendants were all charged with disorderly conduct, as well as demonstrating within any of the Capitol Buildings. Rather than accept a plea bargain, they insisted on a jury trial.

Like many Americans, all three defendants were appalled by the selection of Jeff Sessions, who is notorious for his ultra-conservative views, including opposing the Matthew Shepard and James Byrd Jr. Hate Crimes Prevention Act, voting against the Violence Against Women Act of 2013, and supporting the Supreme Court’s decision in 2013 that significantly cut key provisions of the Voting Rights Act of 1865.

“I felt it was my responsibility as a citizen to dissent at the confirmation hearing of Senator Jeff Sessions, a man who professes anti-immigrant, anti-LGBT policies, who has voted against several civil rights measures and who jokes about the white supremacist terrorist group the Ku Klux Klan,” said Desiree Fairooz.

“As an American who loves the constitution and the rule of law, I felt compelled to protest the nomination of Senator Jeff Sessions to become the number one law enforcement officer in the country,” said Tighe Barry. “His nomination and confirmation as Attorney General make a mockery of our judicial system and our constitution in general. Time has shown that our concerns were valid. Session is a terrible attorney general and is already setting back progress this country has made in the area of civil rights and race relations.”

On April 18, Sessions dismissed the entire State of Hawai’i as “an island in the Pacific” in an effort to discredit a federal judge’s ruling against the administration’s second so-called Muslim travel ban.

On April 21, he sent letters to nine “sanctuary cities” threatening to cut federal funding unless they complied with federal immigration laws.

On April 22, he asserted that the U.S. could pay for the egregious and, by most accounts, ineffective border wall by clawing back over $4 billion in refundable tax credits paid to “mostly Mexicans,” without any factual evidence of the recipients’ ethnicity.

These are just some of the latest examples of the Attorney General’s dangerous level of ignorance and disregard for Americans and the historical institutions he is charged to protect.