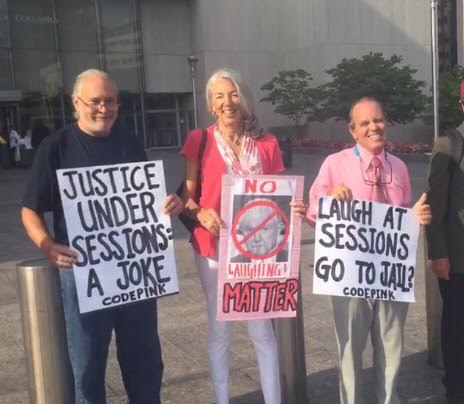 Today's sentencing of CODEPINK activists Desiree Fairooz, Lenny Bianchi, and Tighe Barry for protesting at the confirmation hearing of Attorney General Jeff Sessions was shameful. Desiree Fairooz, who was arrested for laughing, will have to go through the whole process again with a new trial in September. (The judge said Fairooz should not have been tried for laughing, only for speaking out as she was being removed. Instead of dismissing the whole case, he ordered a retrial.) Lenny Bianchi and Tighe Barry were given a $100 fine, 10 days of (suspended) incarceration, and 6 months of probation from Capital grounds for each of the two charges; disrupting Congress and demonstrating.

These sentences are designed to discourage dissent and prevent activists from engaging in the daily protests that are taking place during this tumultuous time. CODEPINK feels that the judge should have overturned these absurd convictions and dropped all three cases.

As Desiree was leaving the courthouse, she remarked, "I would have never spoken out at the hearing if I hadn't been arrested for laughing, and now I am going to be tried again! It's absurd. This is a waste of everyone's time and a waste of tens of thousands of dollars in taxpayers money. The only thing more ridiculous than being tried for laughing, is being tried twice for laughing."