Celebrating International Women’s Day with the Women of Gaza, Not in Gaza, but in Cairo

Five years ago in March, 2009, only two months after the 22 day Israeli attack on Gaza, I was on an international delegation of sixty women organized by CODEPINK who traveled to Gaza for International Women’s Day. In the week in Gaza, we met with women where their homes used to be before they were destroyed by the Israeli attack that killed 1450, wounded 5,000 and left 50,000 homeless.  We also met with women in 13 community centers throughout the country, to listen to their stories of life under attack and under siege.

Five years later, I joined an international delegation of 100 women from 7 countries to travel to Gaza in solidarity with the women of Gaza for International Women’s Day.  Women of Gaza are over 50 percent of the 1.7 million people who live in tiny Gaza.  As they care for their families, they face extreme circumstances with daily attacks from the Israeli military, lack of electricity and water, environmental disasters of sewage flooding into the streets, and a lack of basic necessities.  Hundreds of tunnels under the border with Egypt that previously brought food and supplies denied by the Israelis in their land blockade of Gaza, have been destroyed by the Government of Egypt, reportedly to prevent weapons smuggling by militant groups.  Travel in and out of Gaza through the Egyptian border for medical treatment, education and family visits to relatives around the world has become even more difficult have in the past.  The Egyptian border with Gaza now has been closed for 28 consecutive days and was only opened once in February for a number of pilgrims to Mecca to return.

Palestinians who have never been charged with a crime, never seen the inside of a court are now treated as convicted prisoners  in the “open air prison” called Gaza--- the walls on all sides of the prison, the Israeli land and sea blockades on three sides and the Egyptian blockade on one side,  are closing tighter and tighter.

It is because of those conditions in the lives of women of Gaza, that our delegation wanted to join women in Gaza to show our concern and solidarity as women-to let them know we have not forgotten them.

Today, on International Women’s Day, 16 of our 100 delegates are celebrating International Women’s Day in Cairo, Egypt, not Gaza.  However, 62 of our delegates were refused entry into Egypt by immigration authorities and are sending their greetings from their home countries of France, Belgium, the United States, Algeria, the United Kingdom, Luxembourg, Switzerland and Australia. 22 of the 100 initial delegates decided at the last minute not fly to Egypt, including Djamila Bouhired, the 79 year old Algerian independence icon. 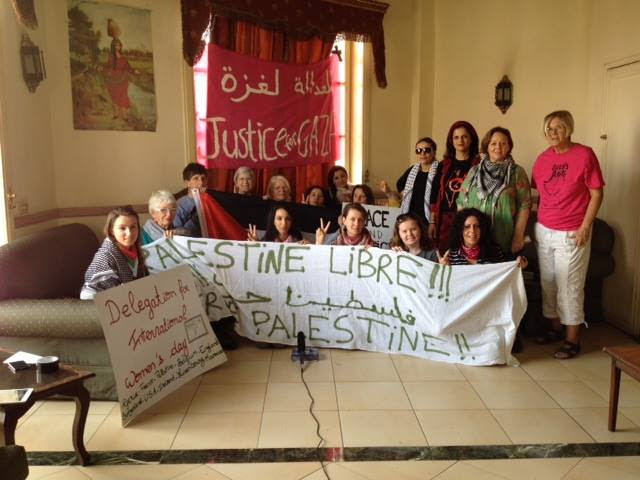 Photo of in Cairo of French, Swiss and American delegates of the International Women’s Delegation to Gaza

Although we can never know your suffering as you feel it, we hold you in our hearts, and pledge to you our continuing, ever-deepening solidarity. We will tell your story to all who will listen.

We will tell your story to our Parliamentary and Congressional representatives so they can better understand the injustice they support and the suffering they cause by the billions of dollars they send to Israel and Egypt.

Our sisters who were not allowed even to enter Egypt have a strong additional motive for solidarity.

We celebrate International Women's Day in different parts of the world, but our hearts and our perseverance in the struggle make us one.

Ann Wright served 29 years in the US Army/Army Reserves and retired as a Colonel.  She spent 16 years in the US Diplomat Corps and served in US Embassies in Nicaragua, Grenada, Somalia, Uzbekistan, Kyrgyzstan, Sierra Leone, Micronesia, Afghanistan and Mongolia.  She resigned from the US State Department in March, 2003 in opposition to the war on Iraq.  She has traveled to Gaza six times since 2009 and was on the two Gaza Freedom Flotillas and was an organizer for the 2009 Gaza Freedom March that brought 1300 persons from 55 countries to Cairo to travel in solidarity with the people of Gaza (only 100 were allowed to travel to Gaza).