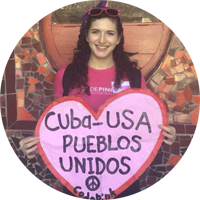 Brienne was drawn to peace activism during her college years in Washington, DC, after growing up in a heavily militarized community. She has a BA in International Studies and an MA in International Peace and Conflict Resolution from American University. Brienne joined the CODEPINK team in January 2017 and has since organized dozens of actions in DC as well as co-organized a delegation to Cuba. She is also a member of the Divest from the War Machine team and acts as CODEPINK's media liaison.

Her favorite CODEPINK quote and personal mantra is tied between "Feminism not Militarism" and "Education not Militarization".

back to founders & Staff