Film Screening: Brainwashing of My Dad; during GOP Convention! 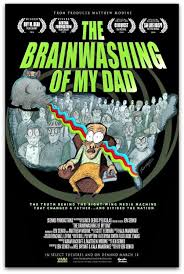 Filmmaker Jen Senko examines the rise of right-wing media through the lens of her father, whose immersion in it radicalized him and rocked the foundation of their family.
CODEPINK Co-Founder Jodie Evans worked as the Executive Producer on this film -- join her and members of the filmmaking team for a Q&A after this important screening during the GOP Convention!