Boycott/REMAX Launches with a Bang

by Sophia Armen and Anna Kaminski

Boycott/REMAX: No Open House on Stolen Land” Launches with a Bang: Reflections on the Week of Action by Two Young CODEPINK Organizers 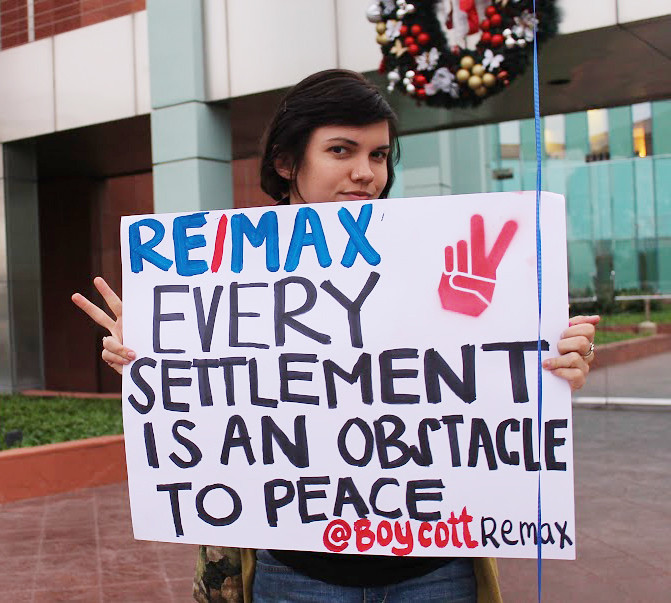 Last month the Israeli government announced yet another horrific settlement project that includes the construction of 1,000 new homes in East Jerusalem, expanding the government’s continued disregard for international law. This announcement is yet another example of the marginalization of the Palestinian people, who are continually uprooted and made into refugees in order to make way for Israeli settlers. As committed human rights activists we find these actions abhorrent and the United States’ blanket stamp of approval of the Israeli Occupation, unacceptable.

As detectives in pink, we found that Colorado-based RE/MAX International, through its contract with RE/MAX Israel, is facilitating and profiting from the sale of homes in settlements. Outraged, we launched our Boycott RE/MAX: No Open House on Stolen Land campaign on November 29th in honor of the International Day of Solidarity with the Palestinian People. 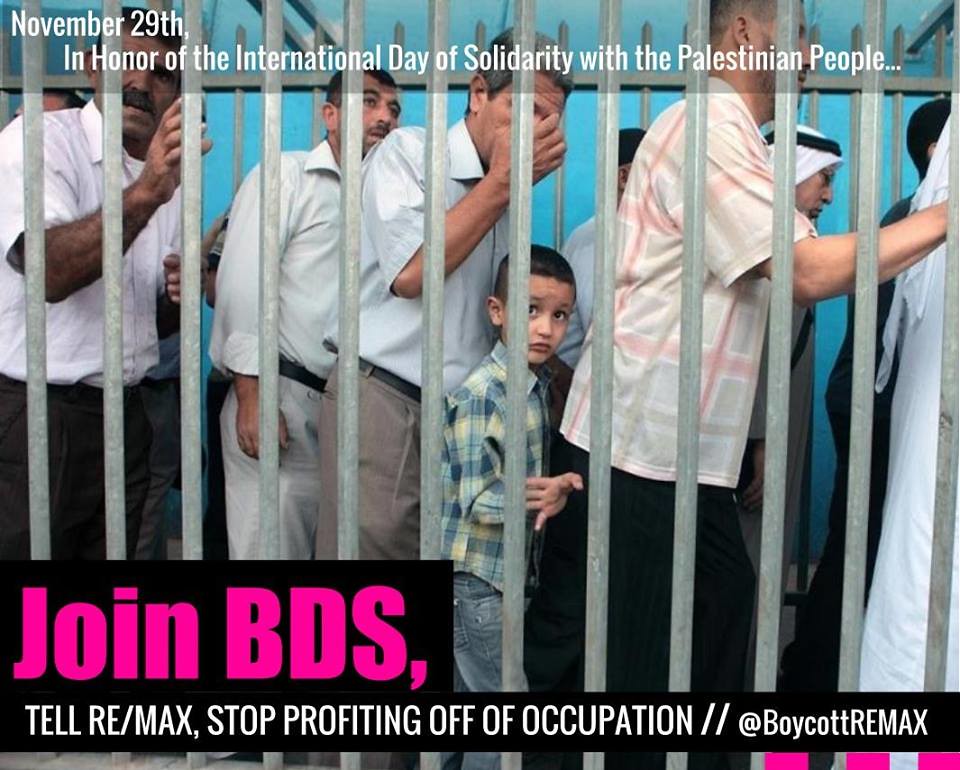 With fire in our hearts, from Nov.29th - Dec.5th activists from around the world went into their local communities to spread awareness about the Israeli occupation and condemn RE/MAX’s complicity in Israel’s crimes. CODEPINK’s national campaign facilitated over 20 actions in cities nationwide. Local grassroots organizations and activists descended upon their local RE/MAX offices to deliver our national petition with over 3,000 signatures and to protest RE/MAX’s unethical practices.

Concerned community members stood outside in the snow, brought their children after work, and drove from school finals to stand in solidarity with Palestinians. The Boycott RE/MAX: No Open House week of action brought people of various identities and experiences together to address international complicity in militarism, settler-colonialism, and violence. Students, grandparents, bloggers, authors, and members of organizations like CODEPINK, Jewish Voice for Peace, Students for Justice in Palestine, and the US Campaign to End the Israeli Occupation came together for these actions. We heard Palestinians share their families’ experiences to REMAX employees who were moved to tears by their passionate testimonies. We witnessed students of color provide powerful speeches on how Palestine is connected to the same forces that surveil, criminalize, deport, and marginalize people of color in the United States. We educated, agitated, and organized to hold RE/MAX accountable for occupation profiteering.

Highlights of the Week included: 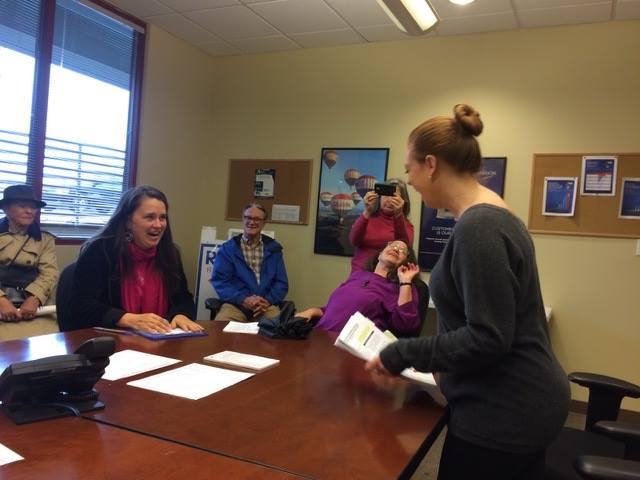 North Bay CODEPINK activists made an impact as they met with RE/MAX employees at their local office in Petaluma, CA to discuss RE/MAX’s role in Israel’s illegal settlements. They delivered the national campaign’s petition directly to the offices staff and demanded the office pressure RE/MAX International to cease operations in the West Bank.

People of conscience in the Bay Area converged to protest at their local RE/MAX Office in San Francisco, CA. They rallied outside Re/MAX’s door and marched and chanted “Hey Hey ho ho the Occupation has got to Go!” in the streets! 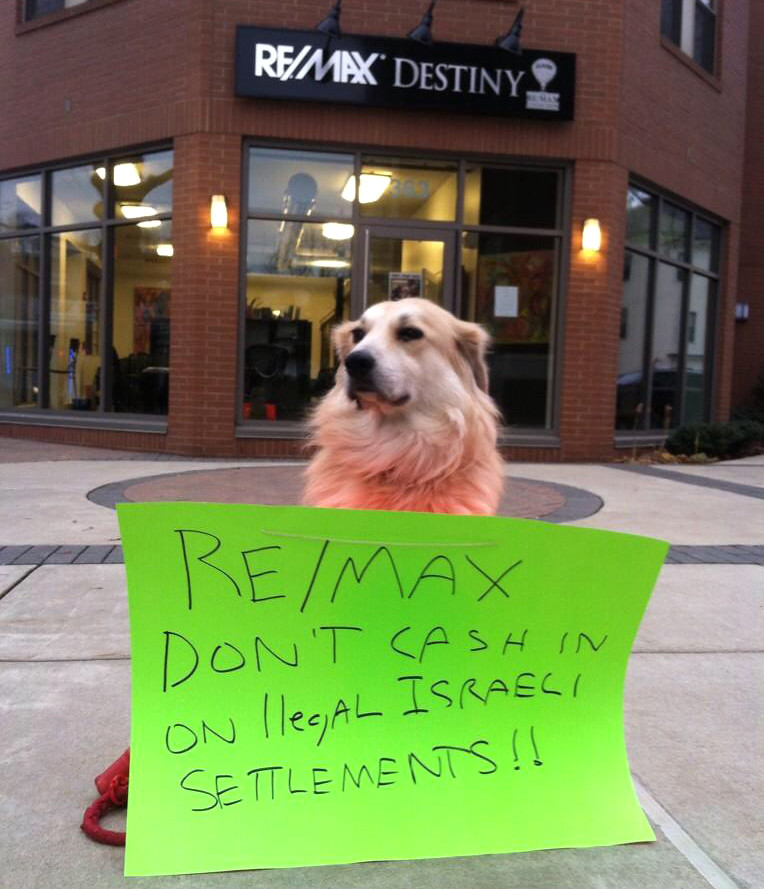 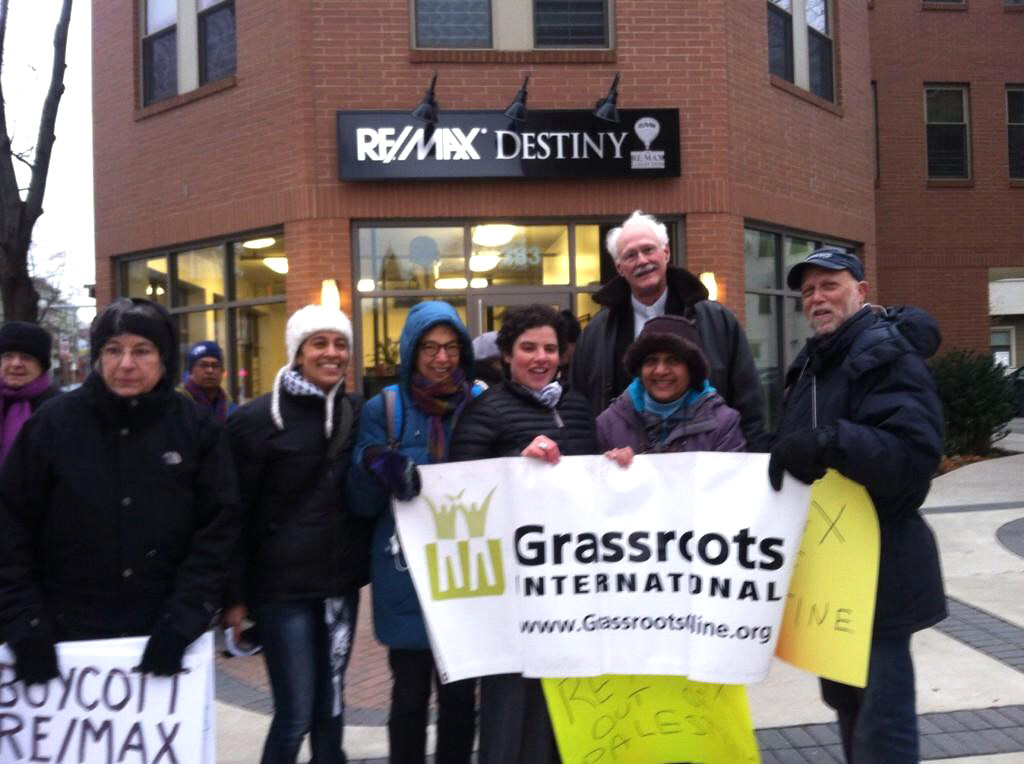 Canines and humans alike protested at their local RE/MAX Destiny in Boston at Jamaica Plain and Davis Square with folks from CODEPINK, Jewish Voice for Peace Boston and Grassroots International. 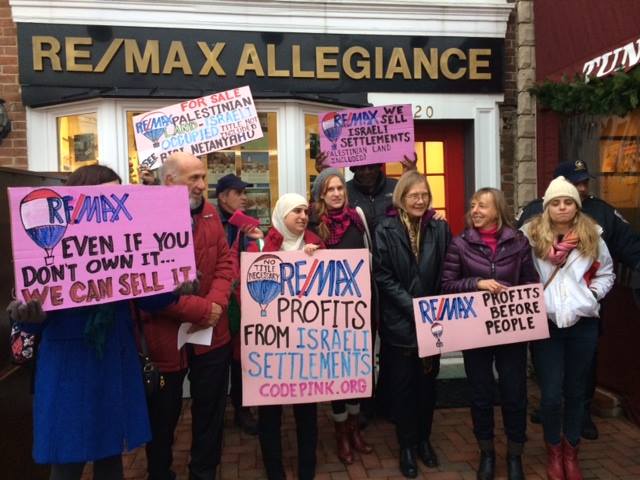 In Washington D.C. CODEPINK organizers were joined by Former UN Special Rapporteur on Palestine and author of UN Report condemning RE/MAX, Richard Falk. Falk spoke of the importance of the BDS movement and targeting RE/MAX in particular for their complicity in Israel’s egregious violations of human rights. 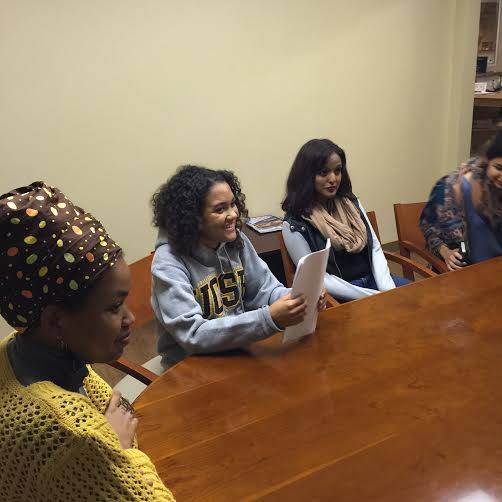 Students and community members joined together for an action hosted by UCSB Students for Justice in Palestine in RE/MAX Gold Coast in Ventura California. Palestinian students shared their families’ stories of displacement from violence by the Israeli government and urged RE/MAX representatives to stop their complicity in the violence against their families. Students made connections between Palestine and the struggles of communities of color in the United States citing the US-Mexico border and militarized police in Ferguson after the death of Michael Brown. 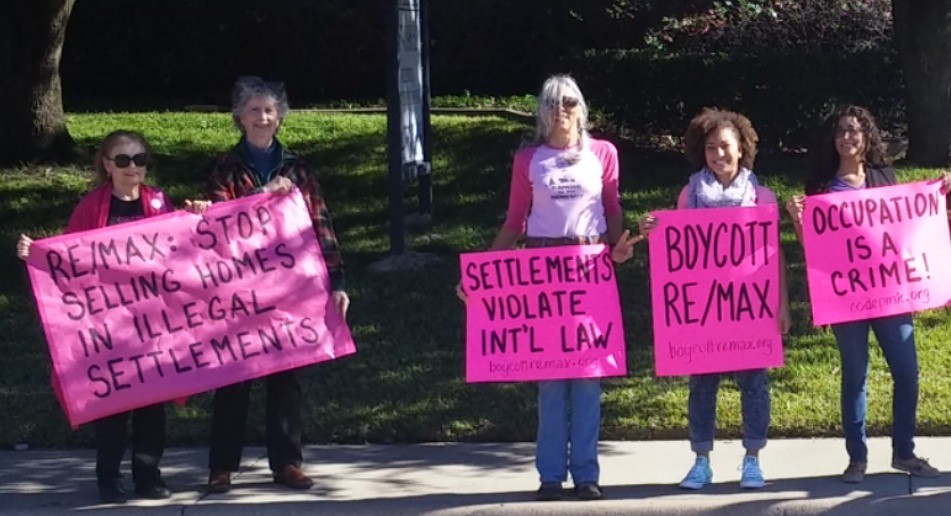 CODEPINK activists in Texas including Leslie Harris and visiting activist from Washington, Desiree Fairooz, demonstrated outside of a local RE/MAX office in Dallas. 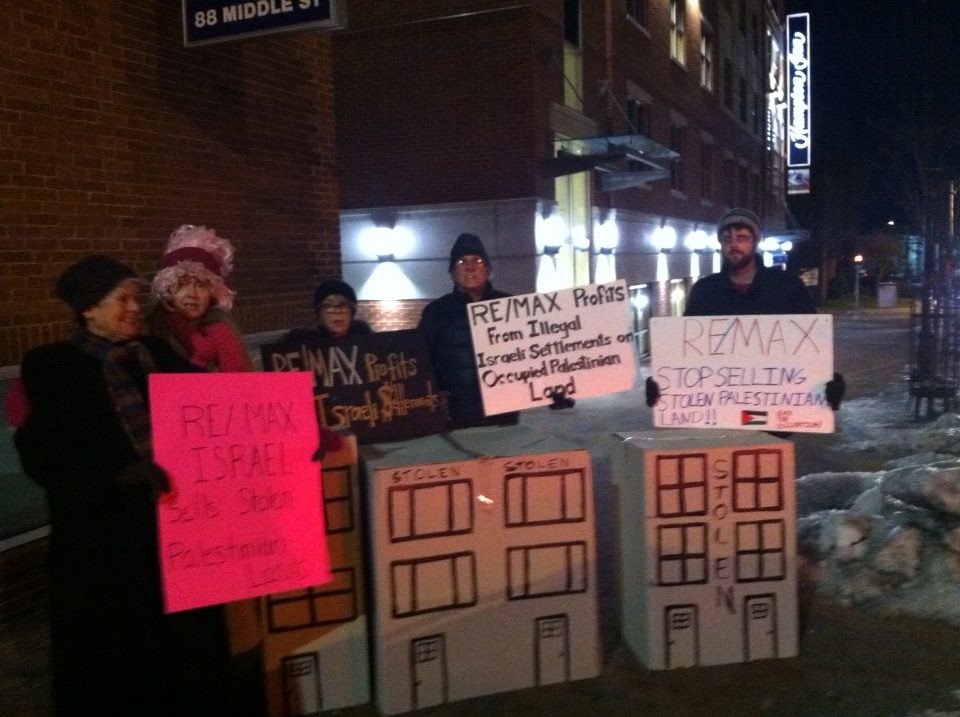 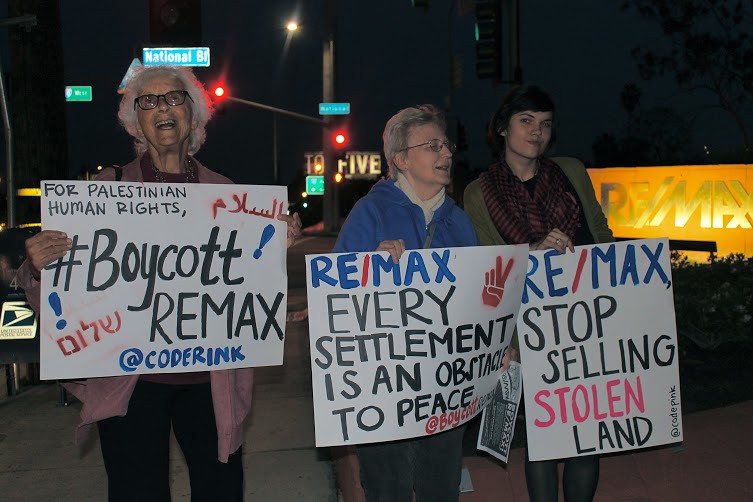 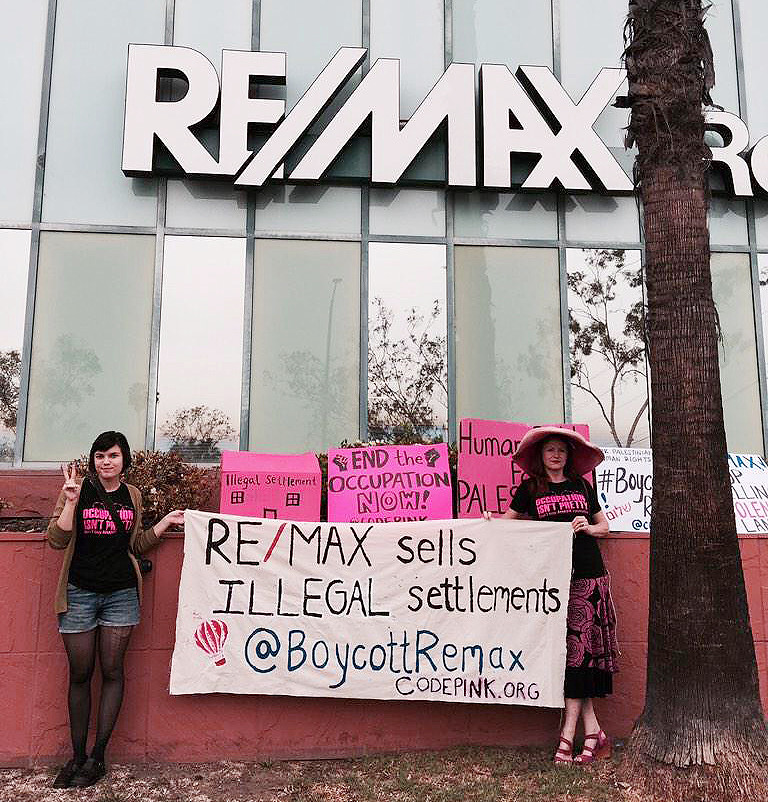 Los Angeles, California held it down outside RE/MAX on Overland Avenue. with CODEPINK Co-founder Jodie Evans as they chanted “Not another Nickel, Not Another Dime, RE/MAX Profits Off Israel’s Crimes!” 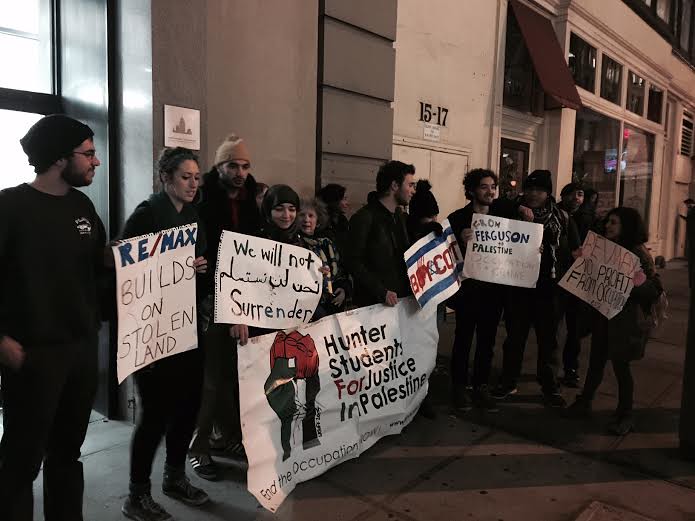 Battling the cold, over 30 concerned New Yorkers were part of our Week of Action at RE/MAX Manhattan including members of Students of Justice in Palestine Hunter College, Adalah-NY, Jewish Voice for Peace, and New York City Solidarity with Palestine. 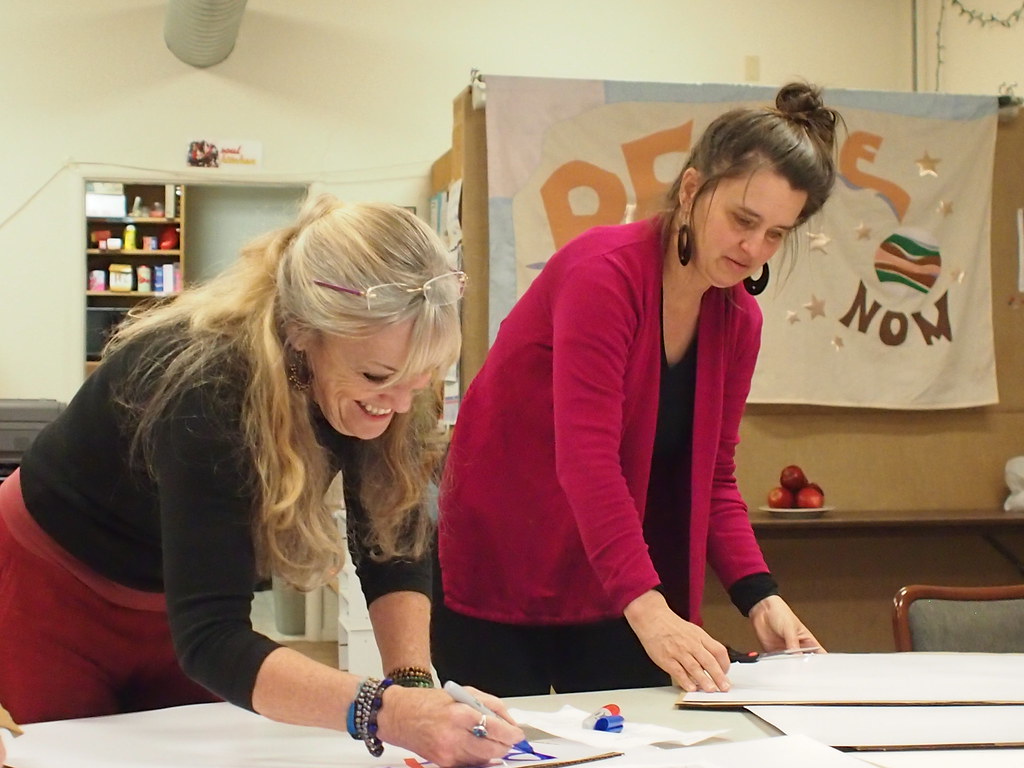 The North Coast Coalition for Palestine and CODEPINK in Santa Rosa delivered our petition to RE/MAX Full Spectrum. Not only did they with speak with RE/MAX representatives, but they held a critical mass outside with their signs. 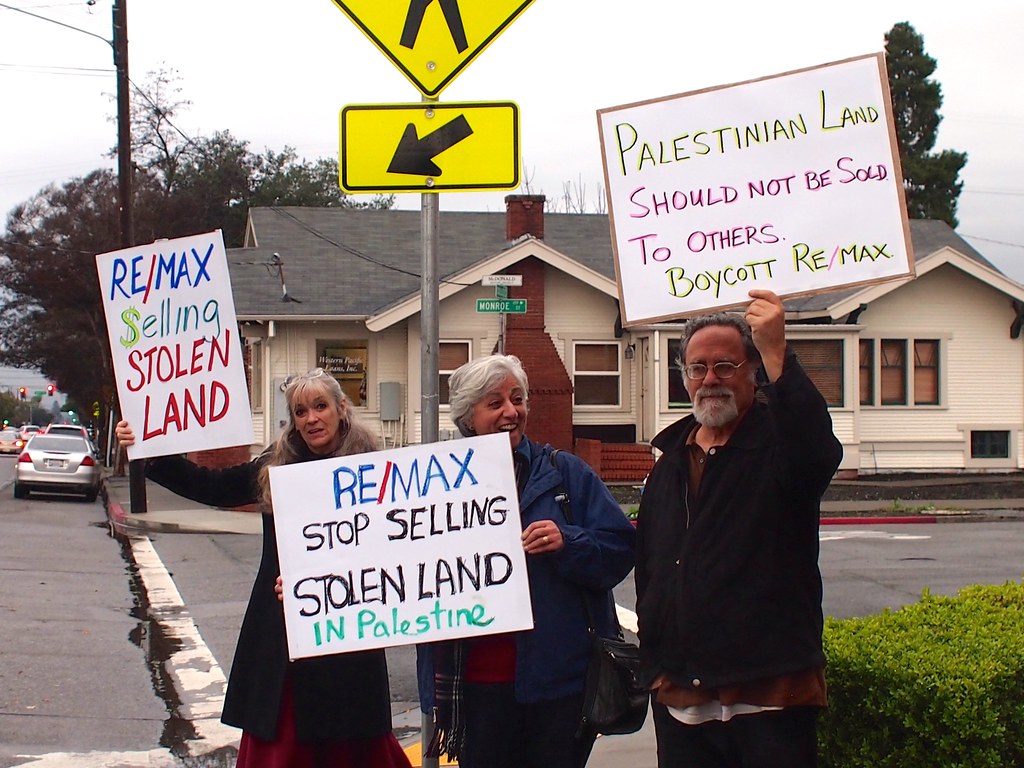 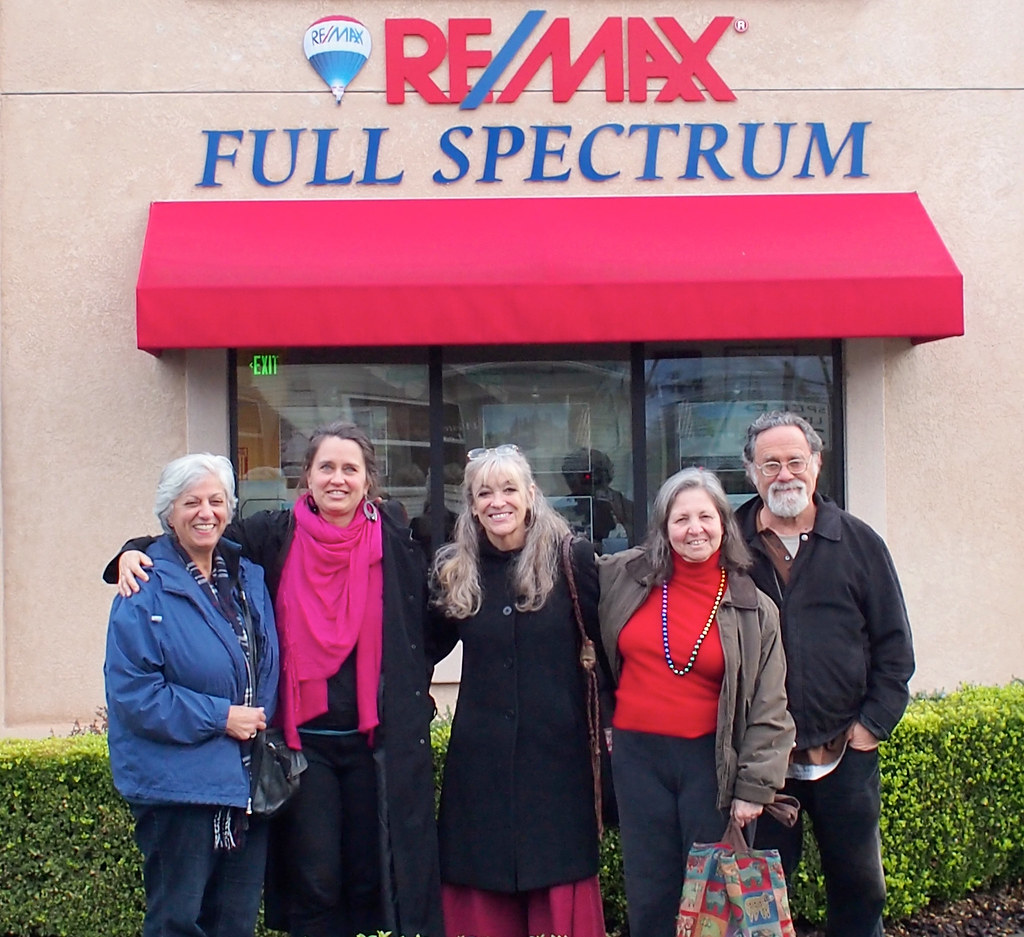 These actions showed the world that our local communities care about the suffering of Palestinians thousands of miles away and that through grassroots community we can make international impact. They prove that even in the face of large political and institutional forces our movement is rapidly growing. From cultural workers like poet Remi Kanazi to anti-war activists like Ann Wright, people are joining the BDS movement and challenging the institutions that produce and contribute to Palestinian suffering. In a world where violence and dehumanization dominates our headlines, moments like these inspire us to move forward and continue fighting global injustices. Palestinians have asked us, the global community, to fight for justice.

May we rise to their call with love and hope..
Sophia and Anna