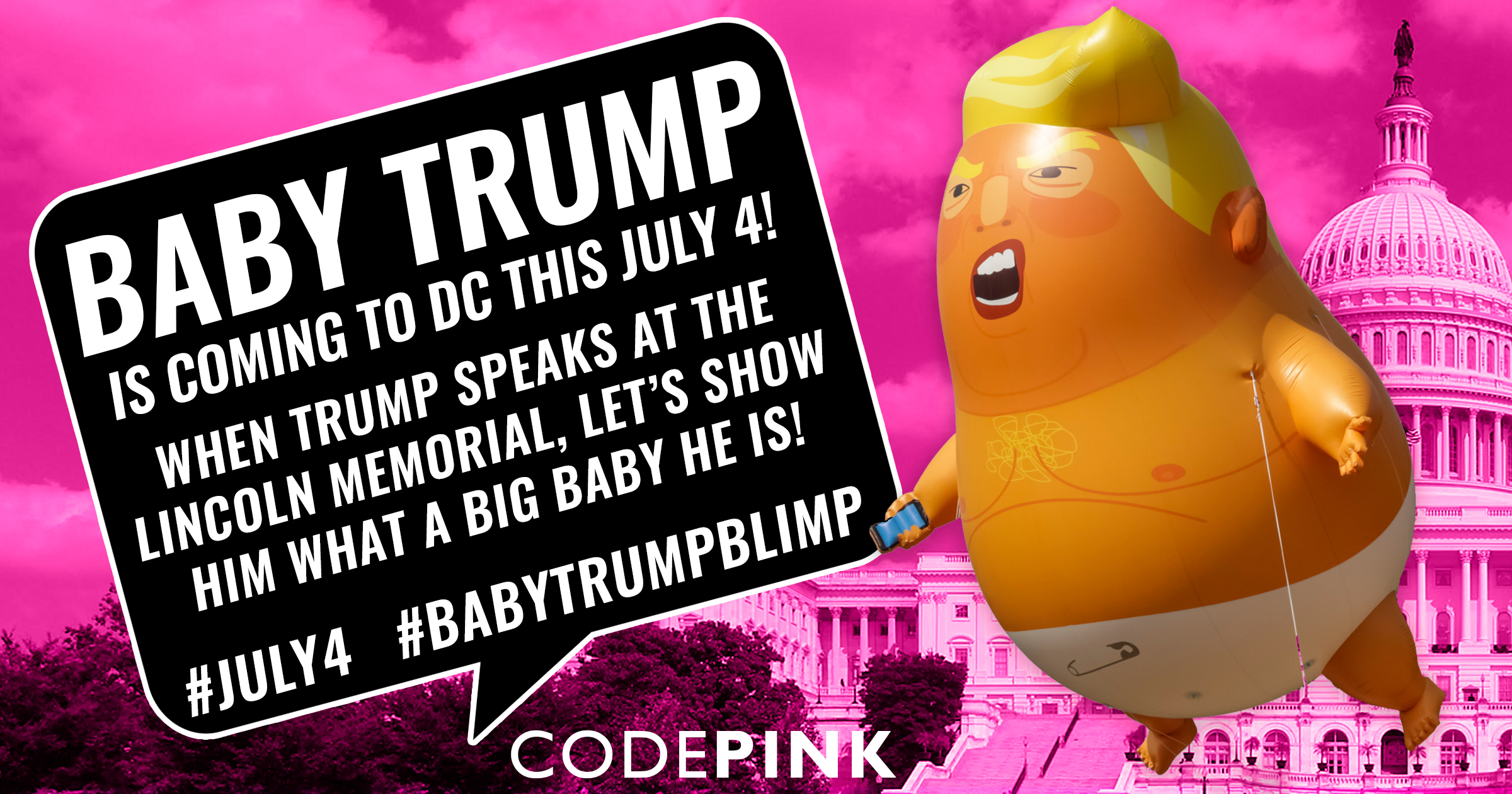 Where: In front of the Lincoln Memorial

CODEPINK denounces the military aircraft and tanks that President Trump is ordering to militarize July 4, while the National Park Service is denying CODEPINK’s request to fly the Baby Trump balloon two feet off the ground.

We will be holding a press conference to protest the militarization of July 4 and talk about our plans to fly Baby Trump with helium and hold a “Trump is a Big Baby” Festival.

After submitting a request for a permit to the National Park Service on June 6, CODEPINK was finally granted a permit on July 1 for the National Mall at the Washington Monument -- Northwest Quadrant near 17th and Constitution

The Trump Baby balloon--which depicts an angry Trump in diapers, holding a cell phone--originated in England and replicas have flown all over the world, greeting Trump as he travels. “It is ironic that it is right here, in the ‘land of the free,’ the balloon is being grounded,” says CODEPINK cofounder Medea Benjamin.

Regarding the location, we had requested a space on the large, empty expanse at the base of the Washington Monument that would not have obstructed anyone’s view but would have allowed the president to see the baby. Instead we were only given location options that were outside the line of sight. We chose the northwest quadrant just off 17th street but feel there was no reason to deny us our right to protest the president where he could see us.

CODEPINK wants to put helium into the balloon so it will rise off the ground a mere two feet. This would only make the entire baby 20 feet tall; the height restrictions for the National Mall is 45 feet. We were told that to do this, we had to get a waiver from the Federal Aviation Administration, which then told us to go to the Flight Standard District Office (FSDO). “We are now trying to get the waiver from the FSDO, but feel this bureaucratic process is designed to force us to just keep the baby on the ground, instead of floating it in the air. It’s ridiculous that we have to contact the FAA to hoist a balloon two feet off the ground,” said CODEPINK logistics manager Tighe Barry. “There is nothing dangerous about helium--there are lots of helium floats in the July 4 parade. And you certainly can’t say that a 20-foot-tall balloon is going to interfere with Trump’s Air Force One and the Navy’s Blue Angels!”